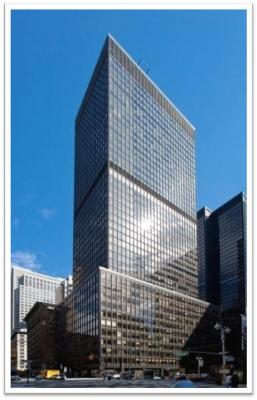 Being in Rockefeller Center might not be what it used to be for the titans of industry and creativity. And while many want to be in the technology heavy and innovative buildings of Midtown South, the area just south of Central Park is becoming a big block alternative.

Commercial Observer has learned that architecture and designed firm Gensler is leaving 1230 Avenue of the Americas and heading a few blocks north. The company inked a 119,414-square-foot deal to expand and relocate at 1700 Broadway between West 53rd and West 54th Streets, according to a source familiar with the deal.

Gensler’s lease is for 12 years and the firm will take the second through sixth floors of the 42-story tower next fall. Asking rent in the deal was $59 per square foot, according to CoStar.

The second through ninth floors of 1700 Broadway were coming available, and the leasing team wanted to fill them with a solid base tenant, Mr. Falk told CO. The landlord had been looking for a tenant like Gensler that could come in and make the space its own.

“We view Gensler as a firm that has an impeccable reputation for style and image,” Mr. Falk said. “So we said ‘come look at this. You can create your own Gensler experience at the base.’ They came over and they also saw the possibilities.”

Gensler is the second design firm in the last few weeks to announce it’s heading north to the blocks just south of Central Park. COOKFOX Architects signed a deal to relocate from the Flatiron District to 20,000 square feet at 250 West 57th Street between Broadway and Eighth Avenue.

Mr. Falk said northern Midtown isn’t just a haven for architecture firms, but those working in technology, advertising, media and information, or TAMI. Because it’s tough to find a big block of space in Midtown South—where many of these industries congregate—buildings like 1700 Broadway offer the same build-out options including exposed ceilings, concrete floors and open, column-free spaces but with more square footage.

“You could see why some of these firms want to be there,” he said. “It’s more of a less suit-and-tie environment and these firms…design it the same exact way they would design it if they were in the Meatpacking District. Same design, it’s just they will get a big block of space here.”