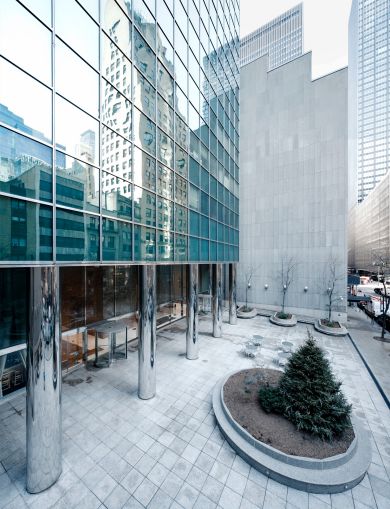 According to an email from The Vortex Group., which brokered the deal on the tenant’s behalf: “This growing law firm was immediately drawn to the impressive views, responsive management and high-end finishes offered by ownership.”

Kato is renovating the facade with floor-to-ceiling glass for the top three floors of the building. In the spring, the landlord pre-leased the 45th floor, with its more than 16,000 square feet, to Advent International.

One of the big draws to the building, Mr. Bakst said, is the rotating art exhibit in the lobby.

“We are now on fourth or fifth exhibit,” he said. “It’s helped the marketing of the building and elevated its sophistication.”

The current installation showcases work by the late Friedel Dzubas. The featured painting is called Crossing, which Mr. Bakst said is the largest continuous single-weave canvas ever displayed in New York. The piece is 57 feet long and 13 feet tall. Dzubas painted it for Shawmut Bank in Boston in 1975.