Behind the Gloss: The Lipstick Building By the Numbers 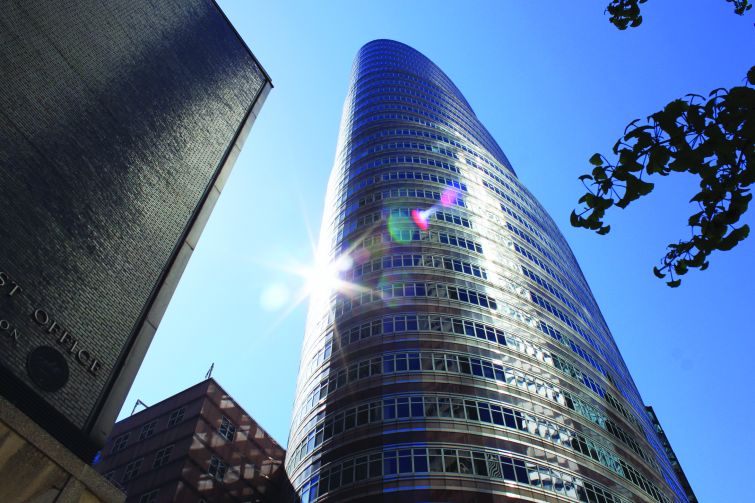 Apart from its red granite and steel facade—and, of course, its stint of housing the offices of Bernard Madoff and his $65 billion Ponzi scheme—the Lipstick Building stands out among other Manhattan office towers because of its complex ownership structure.

The 34-story building at 885 Third Avenue, which sits between East 53rd and East 54th Streets, is back in the headlines because SL Green Realty Corp. signed a contract to sell its ground lease at the property for $453 million to Ceruzzi Properties and Shanghai Municipal Investment USA, Ceruzzi’s Louis Ceruzzi previously confirmed. A representative for his namesake firm declined to comment further until the transaction closes in December.

The Lipstick Building’s new owners have inherited more than just the land below the elliptical tower.

The complex ownership structure of the building goes back to before it was even constructed. In the 1980s, the private family that owned an assemblage of land on Third Avenue did not want to sell it, so instead they sold a ground lease, which allowed architects Phillip Johnson and John Burgee to carry forth with the construction of the office tower. The family retained the fee interest—one small sliver of the land upon which the tower was built. Kuwaiti investment firm Fosterlane Management owned the iconic tower until 2004, when Tishman Speyer purchased it for $235 million in 2004.

As a means to fund the acquisition, Metropolitan took out a $210 million loan from the Royal Bank of Canada and sold a 79 percent fee simple interest and 21-percent leasehold interest to SL Green and its partner Gramercy Capital Corp. for $317 million. Additionally, the two partners entered into a 70-year leasehold agreement. Succinctly put, SL Green bought most of the dirt below the building and Metropolitan owned the tower itself.

Shortly after the 2007 sale, IRSA bought a 35 percent stake in the building from Metropolitan. In 2011—after the firm declared bankruptcy in late 2010—IRSA’s stake in the tower was increased to 49 percent as a part of a debt restructuring.

The recent $453 million sale is expected to close in mid-December. In addition to helping fund SL Green’s purchase of 11 Madison Avenue, it will generate an internal rate of revenue in excess of 10 percent and net proceeds of $45 million, according to a press release issued by the real estate investment trust about the sale. The company is retaining a preferred equity interest and there is currently a $267.7 million mortgage in place, which is slated to mature in 2017.

The structure of the deal “contains a lot of variability in 2020,” he said. “Part of the motivation for selling the asset now was to have certainty as opposed to that variability of outcome in 2020, so us providing the preferred [equity term] would have allowed us to get a good cash return in the interim and not [be] the first in line, depending on what happens with the asset in 2020.”

In 2020, the ground rent will reset to a percentage of fair market value.

For Ceruzzi and SMI, owning the land will allow them to collect the ground rent that IRSA, the lease holder, pays.

“Many, many buildings in Manhattan have a ground lease,” Ms. Mac Avoy said, adding that the Lipstick Building’s ground lease structure is unusual because IRSA reserved to buy the land back at some point.

“Usually one person owns the entire footprint of a building and then leases it, so it’s really unusual, complicated and a bit risky because if the ground lessor does not play along, would you have to just tear the building down?” Ms. Mac Avoy continued. “The other takeaway is how creative people can be in financing the purchase of the building. [IRSA] created a synthetic loan in the form of a ground lease.”

SL Green declined to comment further. A representative for SMI did not respond to inquiries by press time.