One Dead, Another Seriously Injured at Fortuna’s Midtown Hotel Site 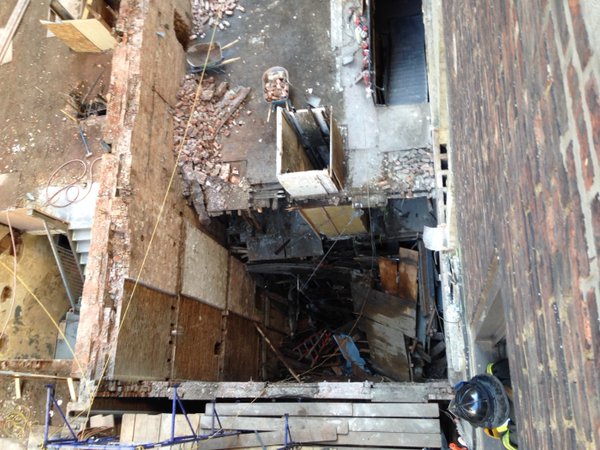 The development site of Fortuna Realty Group’s luxury Aloft brand hotel in the Garment District turned deadly today when part of the building collapsed, killing one construction worker at the scene and leaving another in serious condition after being pinned for hours under debris.

The five-story mixed-use building at 25 West 38th Street between Avenue of the Americas and Fifth Avenue, which is being demolished to make way for the hotel, started to crumble before 10:30 this morning, according to a Fire Department of New York spokesman. About 80 first responders rushed to the scene. It wasn’t immediately clear what caused the collapse.

Emergency workers spent several hours freeing the other worker before finally getting him out before 2 p.m. He was rushed to Bellevue Hospital where he was listed in serious condition.

The workers were on the the first floor of the more than 80-year-old structure when it started to collapse into a “V” shape, according to DNAinfo. Responders were able to get to the dead worker immediately, but the injured man was trapped in the basement for three and a half hours.

“The person was trapped at the very point of that ‘V,’” FDNY Commissioner Daniel Nigro said during a press conference at the site, according to DNAinfo. “The [collapsed] building, of course, is a very dangerous place to work.”

The city’s New York City Department of Buildings is on the scene investigating, an agency spokesman said.

Fortuna bought the building in December 2012 for $11.8 million, property records show.  Demolition at the site began at the end of May to make way for the Aloft New York hotel, as CO previously reported. The $100 million project is expected to be 28 stories with 180 guest rooms. Fortuna’s head, Morris Moinian, told CO in June that it would be Aloft’s flagship location in New York and hoped to have it finished in 18 months.

Starwood Hotels & Resorts, which owns the Aloft brand, said in a statement to AM New York that it is not yet involved in the building process at the location.

“We are very saddened to hear media reports of the accident, and our thoughts are with the family of the worker who was reported to have lost his life and with workers who were injured,” a Starwood spokesperson told the paper. “While this is a site for a future Aloft hotel, we are not involved at this stage and any questions should be directed to the developer, Fortuna Realty Group.”

A representative for Fortuna said the company currently did not have a comment at this time. Northeast Service Interiors, which is doing the demolition at the site, did not immediately have a comment, according to a person who answered the phone at the company. The owners are currently on-site, the person added.

Manhattan Borough President Gale Brewer noted in a press release late this afternoon that 18 construction workers had been killed in her borough between October 2014 and this September, six more than the same time a year earlier and more than double the number killed two years ago. Ms. Brewer said she’s launching a safety group for construction workers that will convene in November to examine the climbing death tolls.

“As Commissioners Nigro and Chandler indicated, we don’t yet know what caused this latest incident,” Ms. Brewer said in prepared remarks. “But what’s become clear is these incidents are on the rise—and we need to act to reverse the trend.”

In May, 44 construction companies nationwide called for improved worker safety to recognize the second annual Safety Week, advocating for better protocol when it comes to such things as fall protection, head stroke and truck safety, as CO previously reported.