A Portrait of the Artists Documenting WTC’s Progress 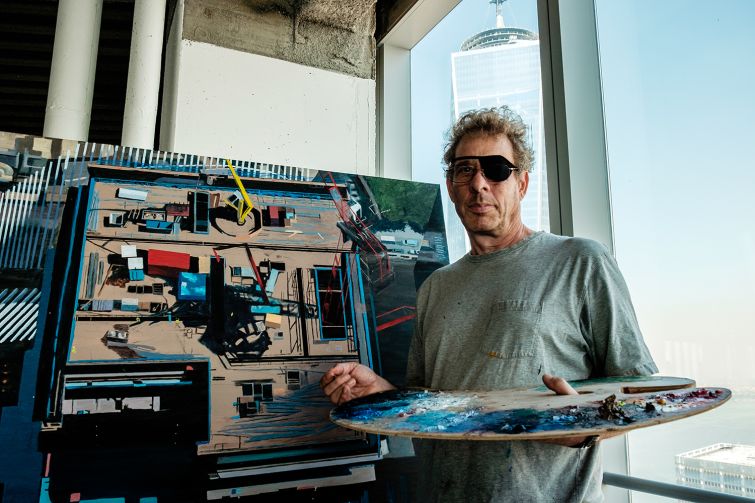 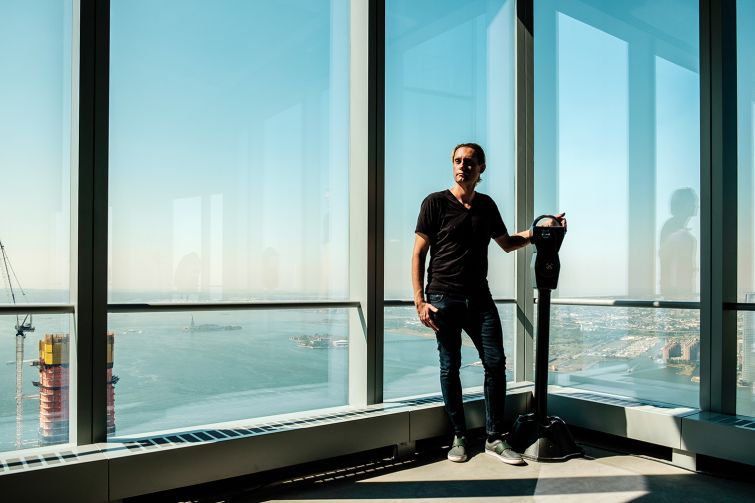 Conrad Stojak with one of his meters (Photo: Chris Sorenson for Commercial Observer). tcullen2015 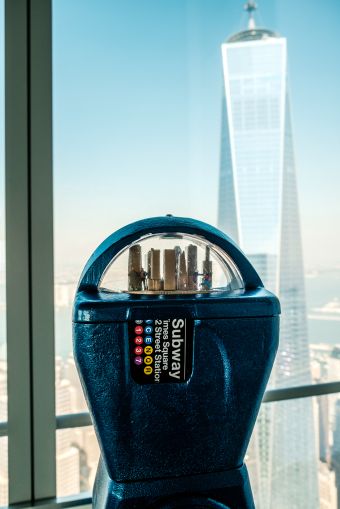 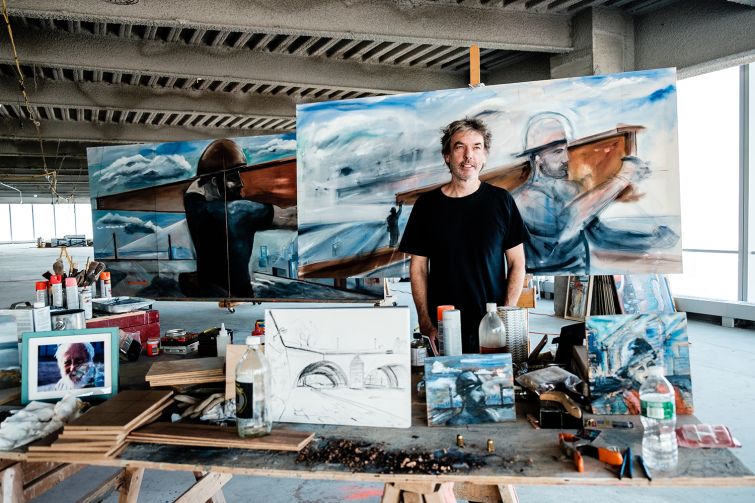 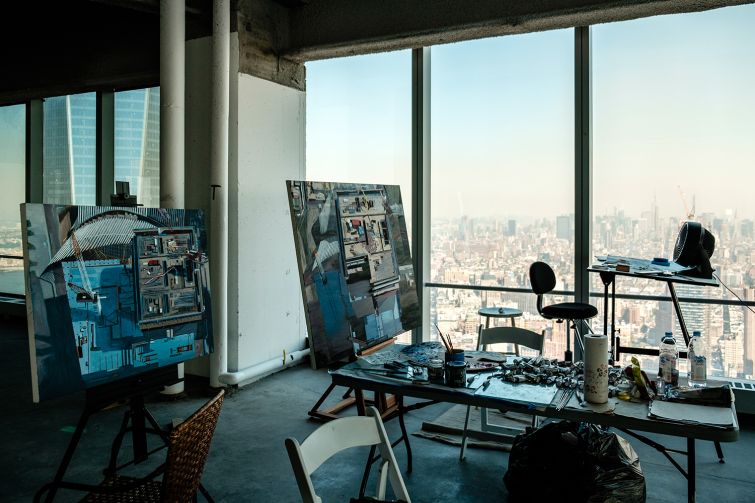 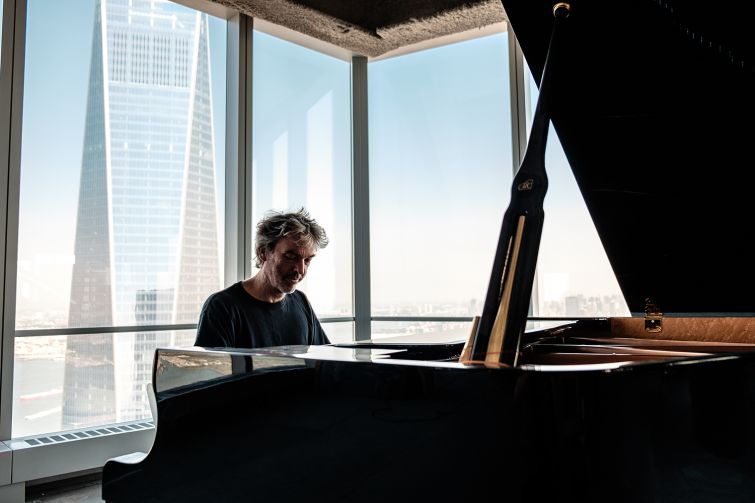 Marcus Robinson was working in France before heading to the World Trade Center (Photo: Chris Sorenson for Commercial Observer). tcullen2015 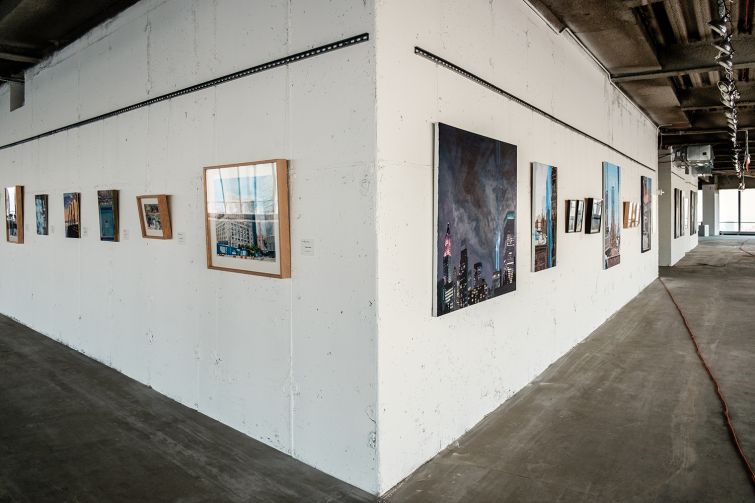 Before this past June, Conrad Stojak’s workspace was a friend’s garage in Queens.

Today, the Jackson Heights-based artist, who is turning old parking meters into sculptures, works from the 67th floor of 4 World Trade Center. He likes water, so he chose the southwest corner—the one that offers unparalleled, unobstructed views of both Upper New York Bay and the Hudson River. It’s the ultimate studio, courtesy of Silverstein Properties.

Courtesy, as in gratis.

Long attached to the belief that art brings vitality, excitement and dimension to any landscape, after 9/11 Silverstein head Larry Silverstein invited artists to work in vacant spaces around the World Trade Center site. And, why not? The empty, unfinished floors look a little like a Soho artists loft in the sky. The space is divided up fairly loosely, with some artists taking a city view—others opting for the Battery. (One artist has an entire floor all to himself.) And these artists have been squatting in these WTC studios for more than a decade.

Documentation of the reconstruction was all Mr. Silverstein asked in return.

“It’s something that’s important to them, but also important to us,” Mr. Silverstein told Commercial Observer. “This is really a little way of producing a running documentation of what transpires daily, weekly, monthly, in a way people can understand and appreciate for generations to come. To keep a document is enormously important to us. They’ve done it so well.”

Mr. Stojak’s work, its own sort of documentation, began as a donation from the Department of Citywide Administrative Services. Previously he was working, er, not in partnership, building mini-sculptures and planting flowers in place of time-declining clocks in broken meters on the street in the outer boroughs. Think snow globes with LED backlights. A current project will be Wi-Fi-enabled, so viewers will be able to manipulate the art with smartphones. The goal is to have the sculptures out on the street again.

Art in public spaces is a favorite topic and mission of Mr. Silverstein.

“It makes the place even more special,” Mr. Silverstein said. Every morning when he goes to his 7 World Trade Center office, he passes Jeff Koons’ red Balloon Flower sculpture in the mini-park out front, the James Carpenter steel screen that frames the building’s base, and the Jenny Holzer light-text installation in the lobby.

“Art enhances the beauty and quality of a building,” Mr. Silverstein said. He is searching for art for buildings 2 and 3. In the meantime he’s thrilled by the art being created in his own house(s).

Mike Marcucci’s 16 Acres, a documentary chronicling the development of the site, just won bronze at the Berlin architecture film festival and can now be watched via Netflix. Mr. Marcucci joined the artists’ colony, so to speak, in 2004 with the promise of a year’s worth of corporate work documenting moments like the Freedom Tower cornerstone ceremony and architectural meetings. Seven hundred hours of tape later, he’s still involved, and will be there until the end, perhaps with a sequel.

“It’s a good time to be down here, everyone’s getting along,” Mr. Marcucci said after admitting his relief when he realized Mr. Silverstein was pleased with the film (Mr. Silverstein walked up to the podium to comment at the premiere). “It’s been an amazing opportunity to be here.”

Mr. Marcucci escorted CO around the 40,000-square-foot 67th floor of 4 WTC, empty but for the work tables, paints, tools, dropsheets and exhibition space of artists, some there since 2013. He mentioned visits from Wounded Warriors, SEALs and family members of 9/11 victims as Todd Stone painted from his space along the north windows facing both rivers and the entirety of Manhattan, eventually to be minimally obscured by the rising 3 WTC.

“I come in here every morning and it takes my breath away. This opportunity has allowed me to rebuild my spirit, to cross the [emotional] fence,” said Mr. Stone, who witnessed and endured the tragedy as a resident of the Western Union Building at 60 Hudson Street. “Silverstein offered me a chance to come inside and make contact with the resilience of the new building. It’s a nerve center here. People from all of the boroughs come down here to work. That’s what I’m chronicling.”

He notes the change in colors of the site, from grays and blacks to circus-like reds and yellows as new paint is applied. Prior to 9/11, Mr. Stone said, his work was all about joyfulness. He was unable to access any of that joyful feeling. “I was living behind barricades. My work became about grief and isolation. I embraced the art form of the elegy and made the most beautiful things I could.”

His personal progression is clear as you circle the floor and regard the paintings, some photorealistic, on the wall. His work will be exhibited in the 9/11 Memorial Museum in the coming year.

“Downtown, down here, it’s the world. I know there are [tourists] in bikinis with selfie sticks but for me, it’s wonderful. It’s fulfilling the function as a place of healing,” said Mr. Stone.

Marcus Robinson was painting in a lavender field in the south of France when his call came. It was spring 2005. The Cambridge-educated artist (he studied modern languages, was fascinated by architecture and urban renewal and is best known for his time-lapse films and photos) had given up on his idea to film directly on the WTC site, a project he’d imagined since 9/11.

Then Silverstein Properties let him know The Port Authority of New York & New Jersey (the developer of 1 World Trade Center) had changed its mind. They were at least going to let him get started, he was told. “I jumped in the car, went to London, flew to New York.”

Mr. Robinson began working at 7 WTC in 2006, moving to 4 WTC in 2012 (when 7 WTC was fully leased). Today, his grand piano and main workspace are situated in the northwest corner of the 66th floor, for reasons “prosaic, sort of unglamorous, unartistic and non-karmic”: summer heat and its opposite (unfinished air ducts pump in hurricane-like winds when air conditioning runs).

The extremes of heat and cold in the building (he’s been inside since the glass was only half applied to the exterior) have helped inform his work, which often starts on plywood from the site. “Touched and beaten up by the construction workers it somehow transmogrifies into a painting,” he said, like his peers directly linking the art created here to the symbiosis of personalities, circumstance and, yes, magic.

“There’s something extraordinary about the relationship of paintings and the site,” Mr. Robinson said. “A lot of the marks in the works are inspired from the textures of the site because wherever you look there are splashes of paint and marks and lines and some are being rubbed out.” His WPA-reminiscent, precisionist-like work highlights specific trades and the diversity of the workers and the larger community.

“The randomness of the different nationalities and people who were killed—there’s something paradoxical about that happening in New York of all places, which is the one city in the world that celebrates people from all backgrounds and all cultures. So the art about that rebuilding should focus on that,” he said.

Next year, the drawings and paintings Mr. Robinson created on site—at least 50—will be exhibited in Belfast, in the former drawing office at The Port of Belfast, where his dad worked in the 1940s. He also manages about a dozen cameras, placed in buildings around the neighborhood, capturing every passing moment. Rebuilding the World Trade Center, the documentary created in his first eight years on site, won a BAFTA Television Craft Award for Photography – Factual.

When 4 WTC is leased, artists will be offered available space at 2 WTC, expected to open in 2018. The artists project will continue to 2020, when 2 WTC opens.

“We’re on our way to finishing these buildings. It’s enormously rewarding,” said Mr. Silverstein. “Watercolor, oil, drawings, prints, photo, film; art brings it to life in a very real and definitive way that gives people an opportunity to appreciate what has transpired.”

With documentation this moving, you almost wish the rebuilding would never stop.