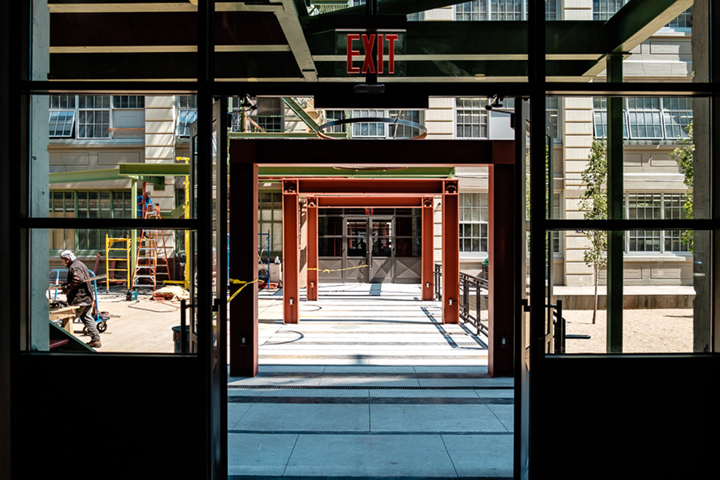 As part of its commitment to its innovative tenants, Industry City is creating an “innovation alley” to connect eight of the 10 non-waterfront buildings that are part of the sprawling 16-building complex in Sunset Park, Brooklyn.

Innovation alley is one of the place-making initiatives at the 6-million-square-foot development that is expected to foster “an environment in which companies want to sell and grow by creating… within shared spaces,” Industry City Chief Executive Officer Andrew Kimball told Commercial Observer while touring Industry City. About $10 million has been committed to the place-making initiatives.

The development’s owners recently finished the sections of innovation alley between Buildings 1 through 4. By next summer, they will have completed the entire alley, to run to Building 8.

“When complete, innovation alley will be approximately 1,000 feet in length, crossing through nine buildings, four streets and four courtyards and reinforced by a series of red-painted steel square arch ‘wickets’ and floating  steel ‘hoop’ lights that continue through the three types of spaces,” said John Clifford, a principal at S9 Architecture, a Perkins Eastman affiliate, and the lead architect for innovation alley and the second place-making initiative: raised sidewalks.

The Americans with Disabilities Act-compliant raised sidewalks will be on 34th, 35th and 36th Streets to make it “more efficient for loading and safer for pedestrians,” Mr. Kimball said. The one on 35th Street is nearly done and the rest should be completed by the end of the year. The old loading docks were angled and when a delivery truck loaded or unloaded, it closed down the street and forced people to walk in the street.

The third endeavor is creating four courtyards between eight of the 10 non-waterfront buildings. The first courtyard was completed at least a year ago and the final one will be done by next summer. There is a different architect for each courtyard.

Parm, which consolidated its manufacturing in more than 10,000 square feet at Industry City about six months ago, is readying to open a retail window at the location, as CO previously reported. It opens onto one of the courtyards. (There are nine tenants in the 32,000-square-foot food hall and eight food-related tenants outside of it. Parm is in the latter group.)

There are 400 tenants at the industrial, office and retail complex. Tenants are drawn to the complex because it’s a “community of innovation with amenities to support them,” Mr. Kimball said. “They loved the notion of what we’re doing here.”

In August 2013, a partnership consisting of Belvedere Capital, Jamestown and Angelo Gordon bought a roughly 50 percent stake in the property from longtime owners Cammeby’s International and FBE Limited. They declined to reveal the financial investment.

“When the new partnership formed in 2013, Industry City faced $300 million of deferred maintenance due to a lack of investment over the last 50 years including the need to modernize 18,000 windows, 144 elevators and an antiquated electrical system,” Mr. Kimball said via email after CO’s tour. “Over the last two years, $100 million has been committed toward these infrastructure improvements, as well as toward key place-making initiatives such as raised sidewalks, innovation alley and new courtyards. Over a 10-year period, including new buildings and tenant investment, we expect that a total of $1 billion of investment will be made in Industry City resulting in the creation of 20,000 jobs.”

Ninety percent of the Industry City retail has a making component or the tenants want to be near their designers, Mr. Kimball said. Recently, the owners announced that two fashion-related companies will be relocating there from Manhattan—thrift shop Material Wrld and online-based fashion and home goods retailer The Line.

On the horizon is a 50,000-square-foot maker’s guild in Building 6. Twenty to 25 makers will manufacture, sell and offer artisanal craft classes in the space, Mr. Kimball said. Industry City’s owners are in the design phase now with construction slated to commence by November and the guild opening next summer.