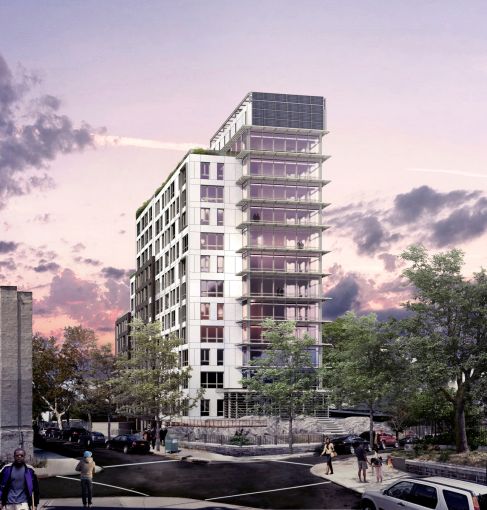 A rendering of St. Augustine Apartments (Image: Catholic Charities of the Archdiocese of New York).

More than a hundred new affordable housing units are on their way to the city’s northernmost borough.

J.P. Morgan Chase’s Community Development Banking team provided a $26.4 million letter of credit for an all-affordable housing development in the Morrisania neighborhood of the South Bronx, Commercial Observer has learned.

The church still owns the site and New York Institute for Human Development, an affiliate of Catholic Charities of the Archdiocese of New York, is developing the 12-story, 112-unit housing facility.

“This project is unique because it is a true collaboration of the city, state and private sector to contribute to the need for affordable and supporting housing in New York City,” Sharmi Sobhan, vice president of Chase community development real estate financing, who worked on the transaction, told CO by email.

IHD is collaborating with New York State Homes and Community Renewal and New York City Department of Housing Preservation and Development to develop the project, which is part of the city’s Extremely Low and Low-Income Affordability Program.

“The city is running out of the land it owns to develop affordable housing, so whenever there are nonprofits or churches, and it fits their mission to develop that housing, it’s great,” a spokeswoman for HPD told CO over the phone.

The New York State Department of Health and the New York State Office of Mental Health is also involved in the project, with 35 of the 112 units being provided to residents who need supportive services. Beacon of Hope House, another affiliate of Catholic Charities, will provide services for residents with mental health or substance abuse issues.

“The new housing at St. Augustine’s continues Catholic Charities’ mission to develop and sustain affordable housing for those in our city who need it most. It demonstrates the commitment of the Catholic Church to continue to use its properties for the benefit of the community in different ways,” Monsignor Kevin Sullivan, executive director of Catholic Charities of the Archdiocese of New York, told CO in prepared remarks.

“We are grateful to all of the partners who have helped this project come to fruition,” he added. “It will allow vulnerable New Yorkers among us the opportunity to live their lives in greater dignity and adds significantly to our growing portfolio of over 2,200 units of affordable housing in other parts of the city.”