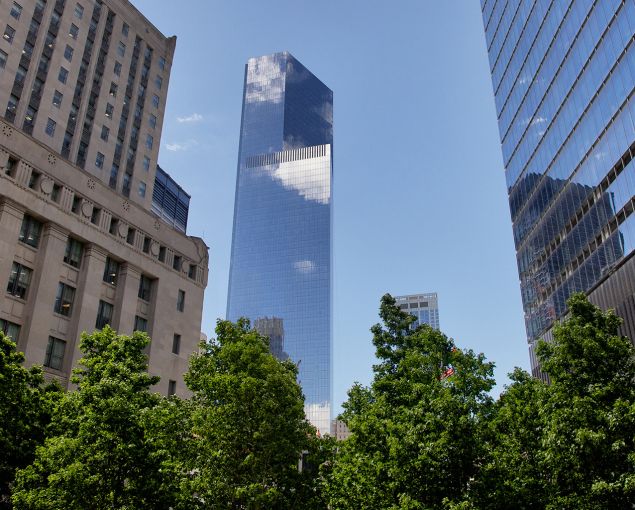 Public relations firm PadillaCRT will fill out the remaining space on the 48th floor of 4 World Trade Center, according to landlord Silverstein Properties.

The firm signed a 15-year deal yesterday for 14,639 square feet at the Downtown tower at the corner of Liberty Street and Trinity Place, Silverstein announced. Currently, PadillaCRT is located at 320 West 13th Street between Gansevoort and Horatio Streets and should be moving in early next year.

“Our 18-month search started in Midtown South as Padilla was looking for a loft style building with high ceilings and views, but after touring 4 World Trade Center for the first time, we never looked back,” said David Kleinhandler of CBRE, who represented the tenant with colleague Jared Freede, in a statement. “The efficiencies of 4 World Trade Center coupled with the recent amenities opening at the World Trade Center site make it a terrific solution for the company.”

Asking rents at 4 WTC start in the low-$70s per square foot, according to a source familiar with the building.

“A move to 4 World Trade Center is a proud moment for our agency,” said Lynn Casey, the chair and chief executive officer of PadillaCRT, in prepared remarks. “This building and the forward-thinking artistry of Silverstein Properties is synonymous with our agency’s vision and commitment to doing business in this great city.”

Investment research and reporting firm Morningstar takes up the rest of the 48th floor with 30,000 square feet.

The Port Authority of New York & New Jersey and the City of New York anchor the building with 650,621 square feet and 602,208 square feet, respectively, according to CoStar. Silver Suites, the landlord’s shared workspace model, is taking the expanding from 7 World Trade Center to 44,000 square feet on the 29th floor of 4 WTC. It’s expected to open in October 2015, according to Silverstein.