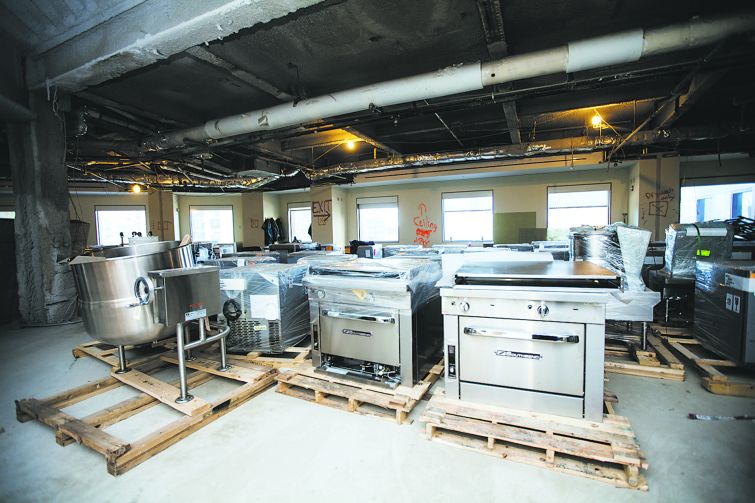 Kitchen equipment worth $1 million was purchased for I.C.E. mgross170

“Look at these striking views of the Marina, the river, Jersey City,” said Rick Smilow gesturing at the floor-to-ceiling windows in what will be the student lounge of the Institute of Culinary Education when it relocates from the Flatiron District to Brookfield Place in mid- to late-March.

Mr. Smilow, ICE’s president and chief executive officer, is clearly smitten. He picked this location after a labor-intensive search with a team of Savills Studley brokers that he recalls involving at least 70 buildings. “There were places that would have cost less but wouldn’t have been as spectacular,” he said.

Nor would they have been able to accommodate all of the school’s kitchens, classrooms and offices on one floor like the 74,000 square feet he’s leasing. “The appeal is the sense of energy and commitment you get on one floor,” Mr. Smilow said. Plus he noted that “this is a Class A building and normally you don’t find a vocational school in a Class A building.” And normally one doesn’t find a vocational school sandwiched on a floor between Saks Fifth Avenue and Time, Inc.

However, Brookfield Place is devoting an unusual amount of space and attention to dining options. Hudson Eats, a thoughtfully curated food court, is already up and running. Le District, a market created to do for French food what Eataly does for Italian, is expected to open in March. And several notable chefs from the esteemed Joel Robuchon to the red-hot Torrisi brothers have signed on.

“Historically the World Financial Center catered to financial tenants,” pointed out Jarod Stern, a corporate managing director at Savills Studley, “but Brookfield Office Properties decided to redevelop it around the idea of food and cuisine. Once we found that out we put one and one together to see what would be a good marriage. What better than to have a world-class cooking school?”

Every Tuesday and Thursday Mr. Smilow walks the site, checking details big and small. On a day last week, he was approving the location of some decorative tiles. “These look like little chocolate boxes,” he said, pointing to the little brown squares accenting the wall of a pastry and baking kitchen.

“I spent a lot of time picking tiles, lighting and flooring,” Mr. Smilow said. “I like doing it. I think I’m good at it. It’s a form of self-expression. This 20-year lease is a legacy build-out. Aesthetically you want to straddle the line between modern and corporate and artisanal.”

The move coincides with the school’s 40th anniversary and Mr. Smilow’s 20th year as owner. The late Peter Kump started the school in 1975 with five students in his cramped Upper West Side apartment, then moved it to a walkup on East 92nd Street and finally to 50,000 square feet at Two Trees’ 50 West 23rd Street shortly before his death in 1995. Mr. Smilow, an entrepreneur looking to buy a business, stepped in at the right moment. “I knew I was ‘on trend.’ The culinary revolution had already started,” he said. However, it had not even begun to reach the fever pitch it has today.

“I was in consumer marketing and I assumed there was more potential in recreational classes,” he said, recalling that Peter Kump’s school just happened to have a career program. Now, however, the model has flipped. “It’s worth paying more for vocational than for hobby,” he explained.

There are currently 750 career students enrolled at ICE. “Last year was our best year ever in the old school; we have momentum,” he said. The new space will be able to accommodate 1,000 career students. There are about 25,000 people a year who take recreational classes, which counts those who take only one class. That number is projected to expand to 30,000.

As Mr. Smilow walked the site whose rooms are still indistinguishable to a visitor, he’s able to point out every kitchen and classroom. This one will have a top-of-the-line Jade island suite. That one will have the specialty equipment found in many contemporary restaurants—a tandoor oven, a plancha, a hearth oven and a rotisserie. This space will be a bean-to-bar chocolate lab with enrobing equipment, a roaster and a winnower. That room will be devoted to stock making and smoking meats. Another is a real working bar with soda guns and speed racks for mixology training.

Altogether there are 11 kitchens, plus classrooms without cooking facilities, conference rooms, offices, a student lounge and a library. The second phase of the project, due for completion in May, will contain a 550-square-foot hydroponic garden that will supply herbs and vegetables.

A million dollars worth of kitchen equipment sits in boxes ready to be placed when construction is complete. Another $3 million went into elaborate ventilation systems.

The school also hosts special events such as corporate team building and summer associates parties. “That’s about five to seven percent of our business,” Mr. Smilow said, “but we’ll be able to have bigger events here.”

He anticipates great demand from corporations to book parties in the gleaming new space with the sweeping water views. Once again Mr. Smilow is “on trend,” placing his school in a buzzy building steps from the Santiago Calatrava-designed World Trade Center transportation hub in the hottest real estate market in New York City.