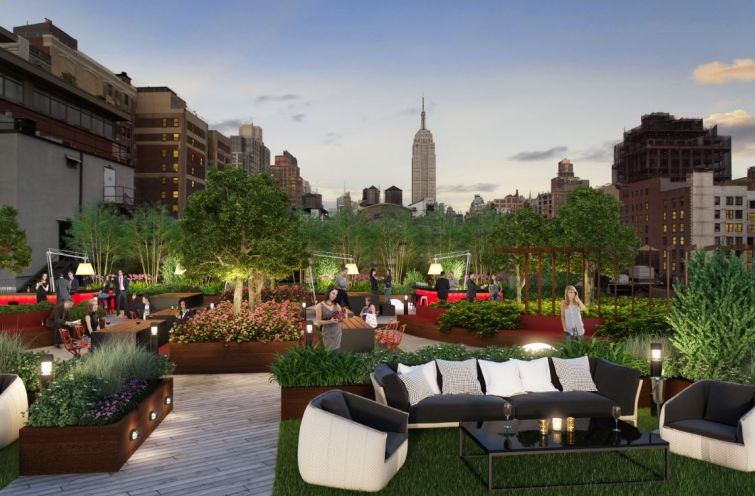 Landscape architect James Corner of James Corner Field Operations, whose design turned an abandoned elevated train track on the Far West Side into a popular public park, is now hoping to provide a similar transformation—this time 11 stories above ground.

Two Trees Management Company hired the High Line‘s lead designer to create a new 10,600-square-foot rooftop garden and outdoor work space on the 11th floor of the 14-story building at 50 West 23rd Street between Fifth Avenue and Avenue of the Americas. It will be a place for meetings, parties, presentations and eating lunch, said Jed Walentas, a principal at Two Trees, when it opens in the third quarter of the year.

The developer will build out a 2,400-square-foot wooden deck surrounded by 3,005 square feet of gardens and 22 tree plantings, a spokesman for Two Trees said. Plans call for a beer garden setting with long picnic tables and trellis for shade. There will be two outdoor meeting areas with whiteboards where tenants can project presentations or use the space for ideation. A third area will have modular seating as well as a long conference table surrounded by glass panes. The garden will be outfitted with power outlets. There will be 270-degree panoramic views of Midtown and the Ladies Mile Historic District.

The Brooklyn-based development firm bought the 340,634-square-foot office building in November 2010 from the Moinian Group for $129.5 million, in its first foray into Manhattan.

Mr. Walentas said the building had been “neglected,” and his company redid the lobby and the elevators a couple of years ago. Now the company is embarking on a $22 million renovation starting with demolishing existing offices, the Two Trees spokesman said.

Two Trees is marketing 150,000 square feet of space in the building, Mr. Walentas said. Once the largest tenant, Institute of Culinary Education, moves out of its 50,000-square-foot home and to Brookfield Place in mid- to late-March, Two Trees will start demolishing its space.

A new tenant has already signed a lease in the building, as has been previously reported. Brooklyn Roasting Company will be opening its first Manhattan location in the building, steps from the lobby entrance, in a couple of weeks, Mr. Walentas said.