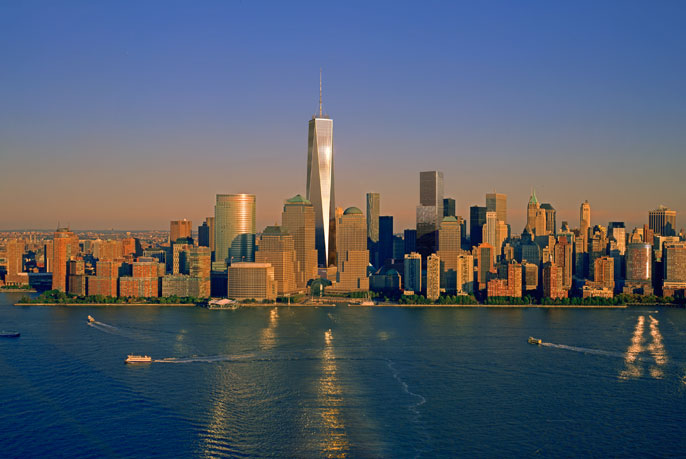 A view of Downtown from New Jersey abarbarinobserver

Location-based advertisers xAd will expand from Midtown South to 1 World Trade Center through a ten-year, 43,849-square-foot lease for the entire 60th floor of the 104-story tower, the Durst Organization announced earlier this week.

The ad firm that targets consumers through mobile device ads based on their location will add an additional office to its existing 401 Park Avenue South office next summer at the Port Authority of New York & New Jersey-owned tower that Durst manages while owning a $100 million joint equity stake. Asking rents at the 3-million-square-foot building, which has now attracted tenants to 1.9 million square feet of its space, run for $69 per square foot, representatives for Durst said.

“As a digital marketing leader, xAd’s arrival at 1 World Trade Center helps reinforce Lower Manhattan’s escalating status as a center of technology, media, and fashion,” said Jonathan “Jody” Durst, president of the company, in a prepared statement. “There is no property in the world that compares with this building. Demand for space at 1 World Trade Center continues to grow.”

Eric Engelhardt, Durst’s vice president and director of leasing at 1 WTC, represented the landlords in the negotiations, along with Tara Stacom, Alan Stein, James Searl and Justin Royce of Cushman & Wakefield and Jodi Pulice of JRT Realty. Jon Mayeske and Jamie Katcher, also of C&W, represented the tenant.

“With offices around the country and the world, xAd actively explored options for moving out of state before deciding to expand in New York,” Mr. Mayeske said in a prepared statement.  “But with Lower Manhattan’s increasing concentration of both retailers and marketing firms, they concluded that this would be the ideal location for a growing mobile advertising company.  Moreover, their workforce would take occupancy in one of the world’s most prominent buildings, and would enjoy easy access to robust transportation options and a wide variety of restaurants and retail outlets.”

The state also played a role, offering xAd $3.4 million in Empire State Development excelsior jobs program tax credits over 10 years if the company retains 76 jobs and creates 350 more, according to the release announcing the deal.

The company joins the ranks of other ad firms such as Droga5 and GroupM who have signed leases at the Trade Center.