The Plan: The Brooklyn Whale Building 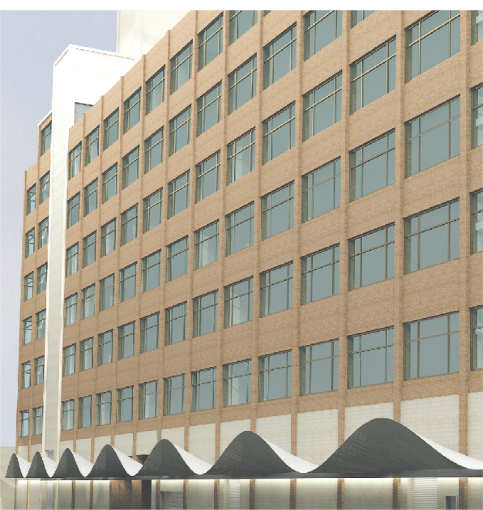 The Brooklyn Whale Building, a 400,000-square-foot industrial property along the Sunset Park waterfront, is being redesigned for commercial tenants, especially those in the tech, media and creative arts fields.

Boddewyn Gaynor Architects is working on the $5 million renovation of the seven-floor, full-block former Whale Oil Company headquarters at 14 53rd Street. 601 West Associates, headed by Harry Skydell, acquired the site in 2011 for $25.4 million and the renovations commenced about two years ago.

The upgrades include steep canopies that highlight the main entrance and two secondary entrances along the building’s 600-foot façade; a new lobby with a concierge desk, newsstand and sweet shop and restroom facilities for visitors; energy-efficient replacement windows; and infrastructure improvements including increased power and new elevators to support the new tenancy.

“The first thing we had to do was the windows,” said Alan Gaynor, the founding principle of Boddewyn Gaynor Architects. “The windows were really falling out of their openings—I mean literally.”

And then there was the façade of the building, which has been cleaned up and had its roofs replaced.

“The façade when we got there was a bloody mess, Mr. Gaynor said. Some of the brick was in terrible shape.

A contract for the wavy steel canopy has been awarded.

“At eye level, I want to tie the [multi-building structure] all together into one building,” the architect said. “I wanted to give it a presence, so that’s why I did the wave awning type thing.”

The waterfront building boasts great views of downtown Manhattan and beyond from the top floor. There is a “180-degree to-die-for view,” Mr. Gaynor said.