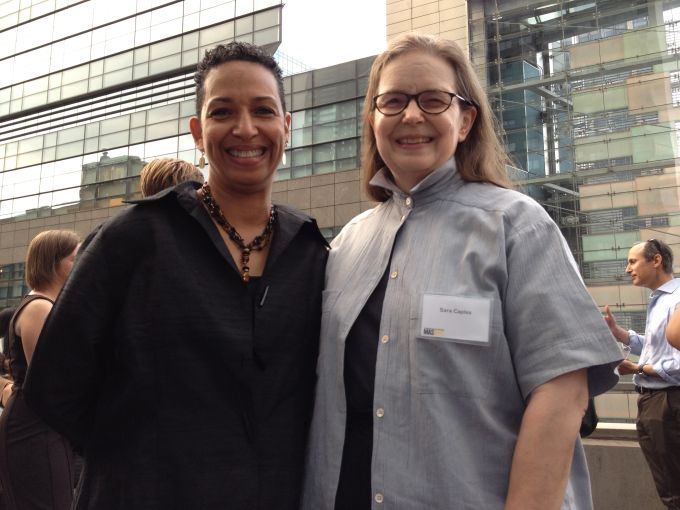 Tia Powell Harris and Sara Caples at the ceremony off Columbus Circle.

The Municipal Art Society presented Bed-Stuy’s Weeksville Heritage Center, a museum, community space and memorial to a prospering neighborhood of free African-Americans dating to the antebellum period, with its highest annual award, “Best New Building,” in a ceremony last night for all nine awards doled out this year by the urban planning and preservation advocacy organization

Everado Jefferson and Sara Caples of Caples Jefferson Architects designed the 23,000-square-foot facility under the supervision of the city Department of Design and Construction on the historic site of the community through $34 million in funds from the city Department of Cultural Affairs, and the center will open for an array of programming starting in September.

The wood and stone building at 158 Buffalo Avenue features a 700-square-foot rotating exhibition space, a lecture and performance hall with a capacity for 200 and classrooms and research space, along with administrative offices. The architects conceived of a building that allows the landmarked houses of Hunterfly Road and green space around them to be visible and accessible while leaving its own marks through innovations like creating West African-patterned shade from sun rays to in parts of the building, said Tia Powell Harris, the president and director of Weeksville.

“I really think you have to experience it to see how well they achieved their goals,” said Ms. Harris. “What you feel is that the building embraces you. That’s just one sample of the extraordinary nature of the building.”

MAS also honored eight other architectural teams for projects like Brooklyn Bridge Park, the Queens Museum and two public school playgrounds, with all the award winners located in the outer boroughs this year. The winning teams and dozens of members of the nonprofit celebrated designs that stand as examples, said MAS President Vin Cipolla.

“This annual event honors projects that enrich our urban landscape and honors the architects and teams that make them possible,” Mr. Cipolla said.