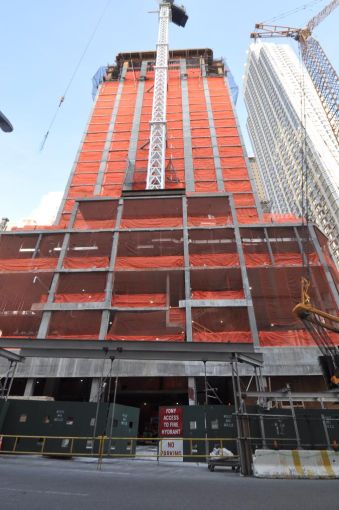 The five controversial tax break eligibilities for luxury housing developers that state lawmakers and Governor Andrew Cuomo carved out for five developers in January 2013 legislation have sparked controversy, speculation and investigation, but only two of the developers have actually applied for and received the 421-a exemptions thus far.

The eligibilities for Silverstein Properties at 99 Church Street, Thor Equities at 520 Fifth Avenue, Friedman Management at 113 Nassau Street, Fisher Brothers at 78-86 Trinity Place and Extell Development Company at 157 West 57th Street reportedly showed up on a subpoena for the Real Estate Board of New York drafted by investigators with the Moreland Commission to Investigate Public Corruption before the governor’s office intervened. But three of the developers have yet to apply to the city Department of Housing Preservation and Development (HPD), and the other two received the exemption in exchange for building affordable housing.

“Three of the properties have not applied for the 421-a benefit,” said an HPD spokesman in an email statement. “The two that have applied were granted eligibility following a thorough review of their applications.”

Despite the hullaballoo surrounding the legislation both after its passage and in the subsequent maneuverings around the Moreland Commission, developers who wish to receive the tax exemption must submit two separate applications that include a breakdown their project’s cost, permits and a host of other supporting documentations in addition to satisfying an affordability component of the abatement program, according to HPD. But the fact that most of the developers haven’t received the exemption doesn’t alter advocates’ questions about the carve-outs, said Blair Horner, legislative director of the New York Public Interest Research Group.

“Whether or not they collect a tax credit—that’s interesting, but it doesn’t match up with what the concern is,” Mr. Horner said. “I don’t think it’s relevant to whether there was a pay-to-play scheme. That’s the worst case scenario.”

Mr. Horner has called for the release of all Moreland Commission documents, which would include the files REBNY later turned over to the commission voluntarily. But with all the questions aimed at the special status that lawmakers awarded to the developers under last year’s legislation, only Extell and Friedman followed up by obtaining the tax abatements through the city’s review process for 421-a exemptions, according to HPD.

Extell’s One57 luxury residential project won the exemption by subsidizing 66 units at three Bronx affordable apartment complexes for $5.9 million, while Friedman picked up the 421-a breaks by devoting 20 percent of the units at its Lara property to affordable housing.

Fisher Brothers is reportedly under contract to sell the development site that’s eligible for the tax abatements, and Thor never applied for them. Both properties may submit 421-a applications to the city if they start construction after Jan. 1, 2007 but before June 21, 2017, according to the 2013 legislation.

The law required Silverstein to begin construction at its property between Jan. 1, 2007 and June 21, 2012, in addition to a $9 million fund to subsidize affordable housing.

While representatives for Silverstein Properties, Extell, Fisher Brother and REBNY declined to comment, the other firms didn’t return requests for comment. But affordable housing advocates said they wished none of them were eligible for the tax exemptions to begin with.

“Honestly, even one of the developers getting these subsidies is too much,” said Jaron Benjamin, executive director of the Metropolitan Council on Housing. “Who knows, maybe more than just those two will get them. It’s very disappointing.”