1 WTC: Inside the Tallest Building in the Western Hemisphere 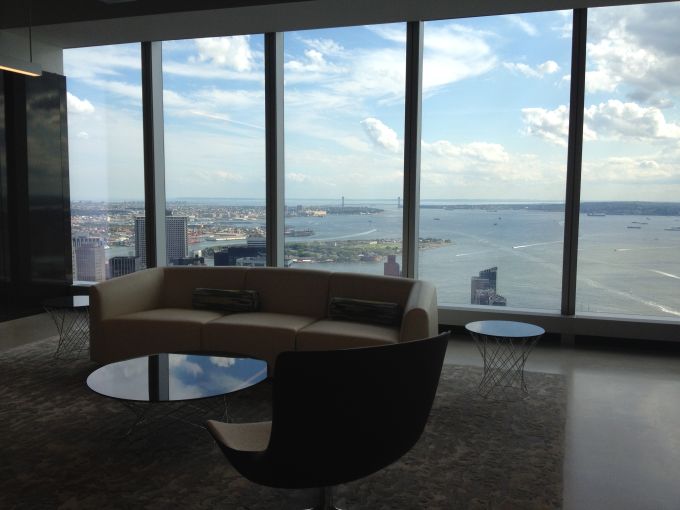 The marketing center on the 63rd floor showcases the building's view of the Hudson River.

As construction workers hammered on the World Trade Center site and hordes of tourists mingled with afternoon commuters last week, Jordan Barowitz of the Durst Organization invited Commercial Observer for an exclusive tour of One World Trade Center.

Although more than 2,500 laborers were applying the finishing touches to the 104-floor, 3-million-square-foot structure designed by David Childs of Skidmore, Owings & Merrill, the 1,776-foot building will open around November of this year, said Mr. Barowitz, Durst’s director of external affairs.

“The fact is that, in two to three months, these fences are coming down for the first time since 2001,” he said, adding that a critical goal of the new 16-acre Trade Center site involves a departure from the previous so-called “superblock” design that cut the complex off the street grid of Lower Manhattan. “Now, we’re just at the cusp of realizing that vision. I think that’s really the pivotal moment of the site.”

The high-performing glass structure that will run on wind and hydroelectric energy juts out of a square base into eight isosceles triangles that form an octagon floor pattern in the middle and lead into a square parapet on top. The building also features a 408-foot antenna, underground corridors that will lead to the nearby transit hub and a system to funnel visitors to the observation deck on top without pushing the crowds into the potential 10,000 people who could work everyday on the site one day.

Condé Nast, the federal General Services Administration and smaller tenants have reserved 56 percent of the building’s space with leases so far, Mr. Barowitz said, showing off a 63rd floor marketing center that Durst, the company that purchased a $100 million joint stake in the building from the Port Authority of New York & New Jersey in 2010, uses for prospective tenants.

While floors range from roughly 30,000 square feet on upper floors to approximately 47,000 square feet closer to the bottom, Durst has also divided existing floors into smaller spaces from 2,100 square feet to 8,600 square feet. Mr. Barowitz displayed one such divided space on the 45th floor.

“We find that this is popular with international tenants,” he said. “Foreign tenants want an address that’s internationally known and prestigious.”

Asking rents range between $80 and $100 per square foot on floors above the 64th floor and run for $69 per square foot below it. But a combination of incentives and tax breaks will net tenants a return of $6 to $8 per square foot, Mr. Barowitz said.

“One of the things that makes One World Trade Center attractive to tenants is you have these massive floor plates and you have no columns,” Mr. Barowitz said, noting that a fashion company whose name he declined to reveal estimated the company could build runways and hold shows on the property. “So it appeals to a diverse group.”