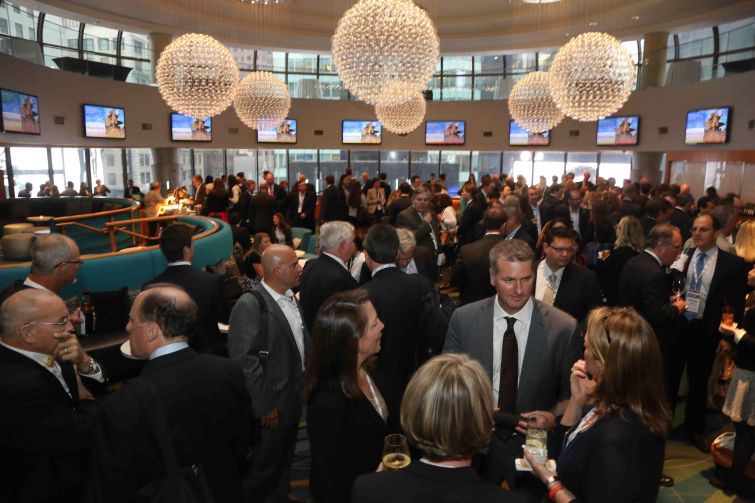 It was a lenders party, technically, though borrowers may have more reason to celebrate.

At a panel on Tuesday afternoon titled “Who’s Your Lending Daddy?” the moderator asked the room of about 200 attendees how many of them were commercial property owners. Fewer than five hands went up.

The four panelists, all commercial borrowers themselves, were the obvious minority and at times appeared as though they might be bombarded on their way out.

All of the main sources of commercial real estate debt are closer to where they were pre-crisis, Mark McCarthy, managing director of debt capital markets at Shorenstein Properties, told the crowd. “The banks have increased loan volume, many life companies are strong in both fixed and stabilized floating-rate financings, and CMBS continues to grow,” he later noted.

“You see who your friends are when the chips are down,” he said as he told a story about a bank that refused to offer a construction loan extension during the onset of the crisis and then called several years later to say that the bank was getting back into construction lending and wanted to gauge his interest. The New York-based real estate developer said, candidly, that his reply was, “We don’t want to do a deal with you again.” [Jared Kushner is the owner of Observer Media Group, which publishes Mortgage Observer.]

David Schonbraun, co-chief investment officer of SL Green Realty Corp., said the REIT—New York City’s largest office landlord—views banks as direct partners and CMBS lenders as “less interested parties” in individual deals. Another panelist, who asked not to be identified, echoed that sentiment, noting that accountability becomes less clear in CMBS transactions. CMBS lenders are most effective when you have few questions and concerns about the transaction, Mr. Kushner said.

In response to another question Mr. Brennan posed about whether the panelists view pricing, proceeds or certainty as their main interest, nearly all were in agreement that certainty comes above all else.

During another, less packed panel titled “Outlook: Bank & Insurance Lending,” conversations also took a candid tone—though none of the panelists would allow attribution for their remarks. The first topic at hand quickly turned to the uptick in deals in secondary and tertiary markets, which provides more opportunity for lenders facing severe competition in major gateway cities.

“Right now is the best time to be a borrower,” said one panelist from the lending arm of a large multinational corporation. “This is as good as it gets. You can find good real estate loans in any market.”

In response to a question about whether or not those lenders are seeing “a glut of deals” in mid-2014, one panelist from a major global bank replied, “We are seeing a lot, but not winning enough.”

The first panelist noted that “low interest rates could be the new norm,” a sentiment that has led his customers to become more accustomed to floating-rate loans, he said. Another one of his peers, an executive at a large life insurance lender, said his biggest concern looking ahead is a “race to the bottom on [interest rate] pricing.”

Mortgage Observer asked the panel when the best time to be a lender was. The responses covered the five years following the credit crunch, with one panelist pointing to the first half of 2008, another citing 2009, “if you could find deals then,” and others citing 2010, 2011 and 2012.

The “Outlook” panel came to a close with a question regarding the EB-5 Program, which provides visas to immigrants in exchange for investments in job-creating projects, such as hotels and other commercial real estate properties.

The majority of the panel’s guests agreed that EB-5 will take up a greater chunk of the capital stack in many deals and that lenders should become more accustomed to the program. However, one panelist, who asked not to be identified, told those in attendance that he did not know what EB-5 is.