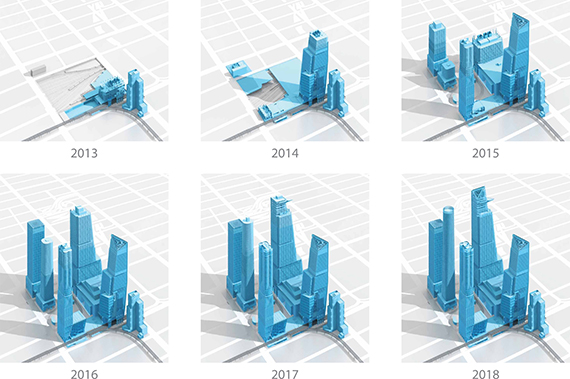 Related Companies has released a new visual for the construction timeline at Hudson Yards (at left) as well as a new video (below) as construction begins on the platform that will cover the rail yards.

Hudson Yards is the largest private real estate development in the history of the United States and the largest development in New York City since Rockefeller Center, according to new press materials from Related, which is overseeing the building of the 26-acre site bounded between 10th and 12th Avenues and running from 30th to 33rd Streets.

The site will include more than 17 million square feet of commercial and residential space, more than 100 shops, 20 restaurants, approximately 5,000 residences, a cultural space, 14 acres of public open space, a 750-seat public school and a 150-room luxury hotel.