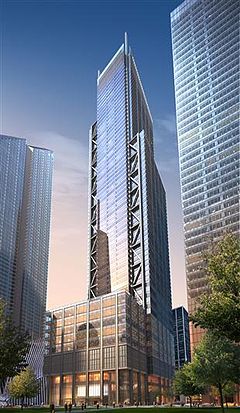 Members of the board of the Port Authority of New York and New Jersey are at odds over whether to double the amount of subsidies available for Silverstein Properties’ 3 World Trade Center to $1.2 billion, according to The New York Times.

Scott Rechler, the vice chairman of the Port Authority and chief executive of RXR Realty, is spearheading the proposal, arguing that construction of the tower would mark the completion of the new World Trade Center site.

The proposal’s critics, including Kenneth Lipper, a Port Authority commissioner, contend that subsidizing the completion of the tower is less vital given the already fierce competition for tenants in Lower Manhattan. The additional subsidies could also negatively impact the Port Authority’s credit rating and budget.

“The idea of giving a $1.2 billion subsidy to a private developer at a time when the market downtown is in a state of glut defies the public interest and the economic interest,” Mr. Lipper told the Times. “It would turn a patriotic gesture into a vanity project. And it could jeopardize our mission, which is to improve the transportation system in the region.”

Late last year, Larry Silverstein, then the president and chief executive of Silverstein Properties, signed GroupM to a 20-year, 516,000-square-foot lease at 3 World Trade Center. The anchor tenant lease allowed the developer to move forward with construction of the property but with less than 50 percent of the building leased, Mr. Silverstein has struggled to obtain financing for the project.