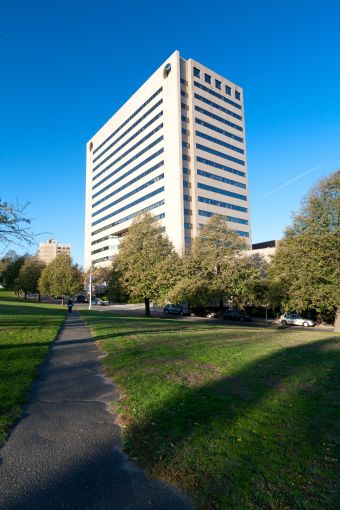 Signature Bank and Tectonic Engineering & Surveying Consultants have each signed a 10-year lease for space at Muss Development‘s Forest Hills Tower, a 375,000-square-foot office tower in the Forest Hills area of Queens.

Tectonics, a civil and structural engineering firm, and the bank will take a combined 17,782 square feet in the building, at 118-35 Queens Boulevard, which used to be JetBlue’s headquarters, Crain’s first reported.

The leases were signed in the 17-story building this month and both companies plan to move into their new spaces this summer.

Relocating from Long Island City, Tectonic has leased 9,948 square feet on the 10th floor. Signature Bank signed a 7,834-square-foot lease on the fourth floor for its executive offices and administrative staff.

The asking rents were in the $30s per square foot.

Space has become available in the building as Federal Emergency Management Association (FEMA), which signed a 200,000-square-foot lease in 2012 to serve as its regional headquarters in response to Superstorm Sandy, is giving up some of its space in the building.

Another tenant to recently sign a lease in the building is Plaza College, which leased 40,000 square feet for its main campus on a portion of the ground floor and the entire second floor. The academic center is opening its new campus this September.

The Forest Hills Tower leasing team of Ken Siegel, Bill Korchak and Kyle Crennan of JLL represented Muss in both transactions. Gus Nuzzolese and Howard Kaplowitz of Colliers International represented Signature Bank. There was no outside broker for Tectonic.

“The market’s response to our floor-by-floor leasing campaign has been tremendous,” said Jason Muss, a principal of Muss, in a prepared statement. “FEMA continues to be an excellent tenant, but as it reduces its real estate needs we have the opportunity to offer some of Forest Hills’ prime office space to a diversity of tenants. They continue to show strong demand for single and partial-floor leases.”