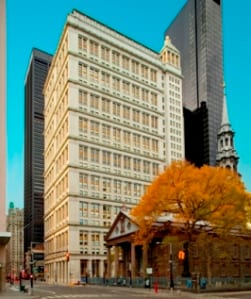 The advertising agency Omnicom continued to build on its Lower Manhattan footprint by leasing an additional 26,414 square feet at 195 Broadway, The Commercial Observer has learned.  The firm now occupies 295,294 square feet in the 29-story, 1.1-million-square-foot tower, which is now 100 percent occupied.

“We had another deal pending on this space,” Mr. Berkey said. “That drove Omnicom to accelerate their decision and ask me to curtail those other negotiations.” He said the company signed last week, and now operates across floors 16, 17, 18, 19, 20, 26, 27 and 28.

Omnicom previously expanded at 195 Broadway one year ago when it signed for a full 39,347-square-foot floor. The agency initially took 160,000 square feet at the property in 2007. Thompson Reuters is the anchor tenant.

Harper Collins in January inked a deal for 180,000 square feet at 195 Broadway in a deal that reinforced the Financial District’s surging popularity among media (and technology) tenants. The building once served as AT&T’s New York headquarters.

“Omnicom’s business just keeps growing, so they’d been talking to me” Mr. Berkey said. “L&L has seen a lot of activity here and at 222 Broadway.”

Mr. Feld could not immediately be reached for comment.