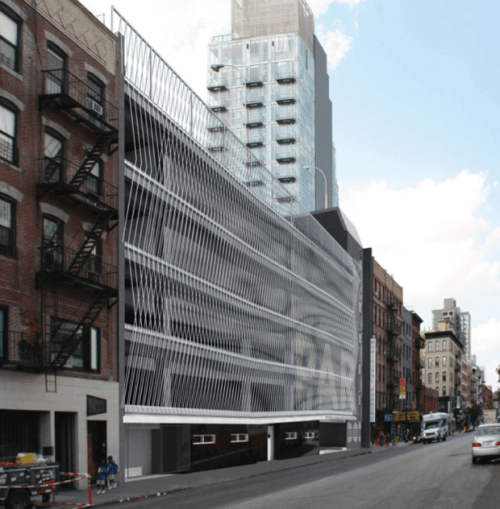 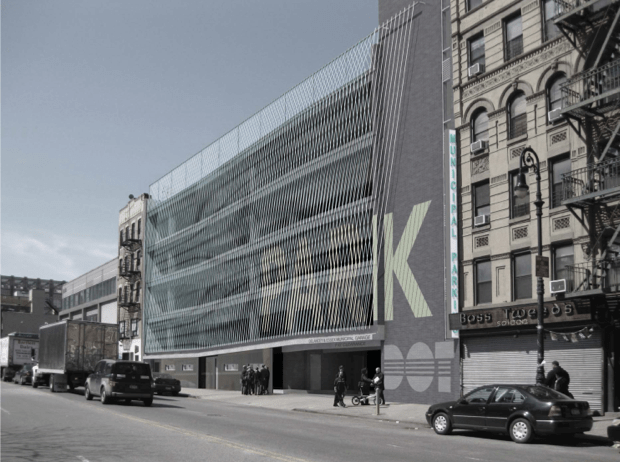 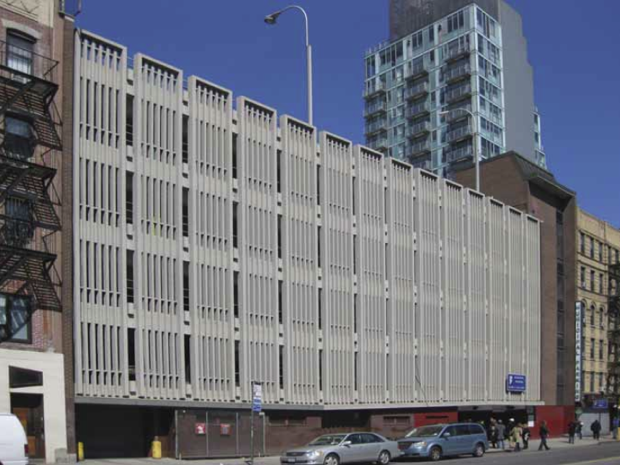 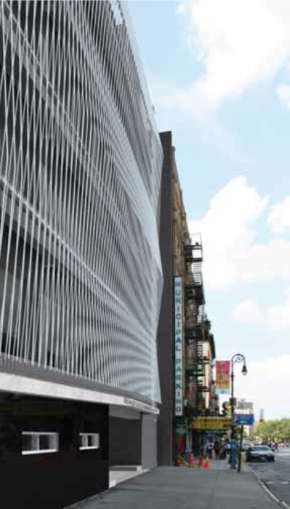 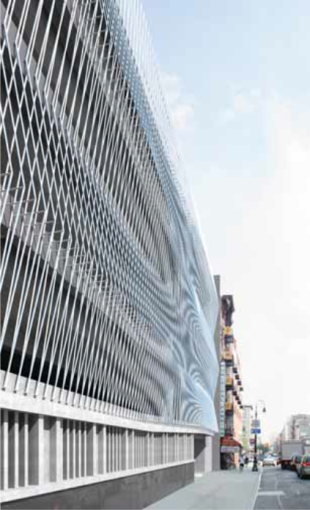 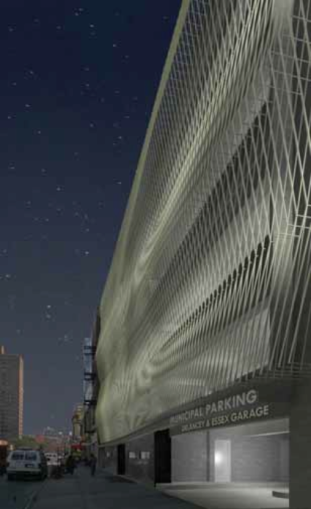 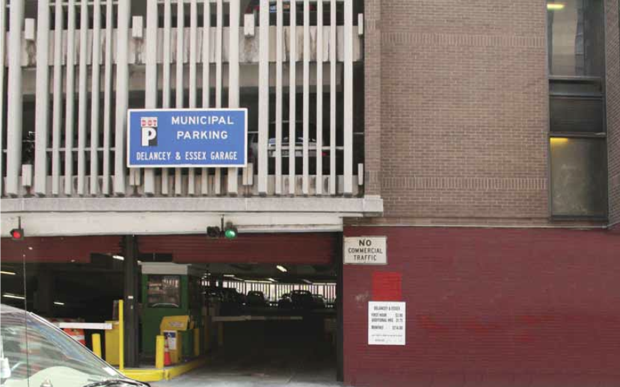 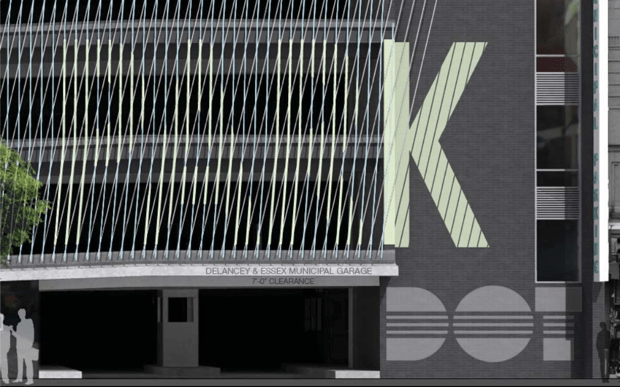 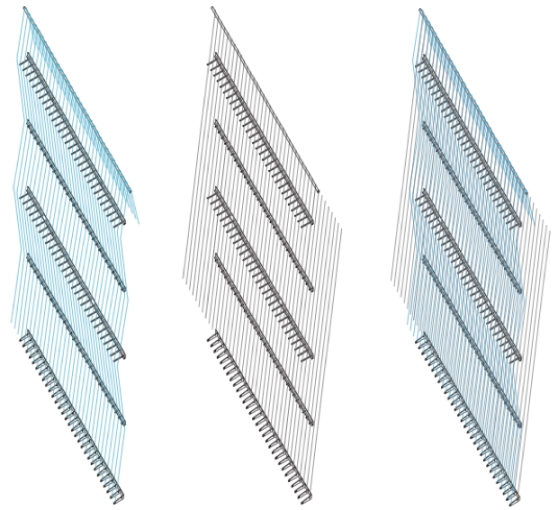 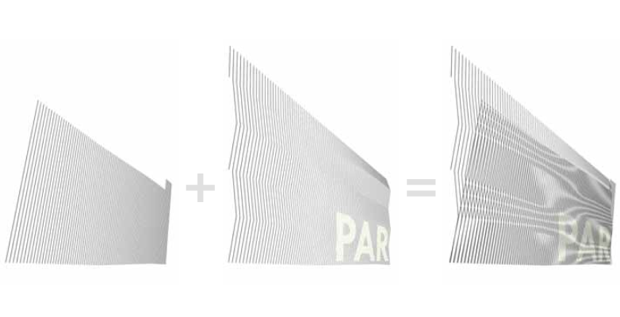 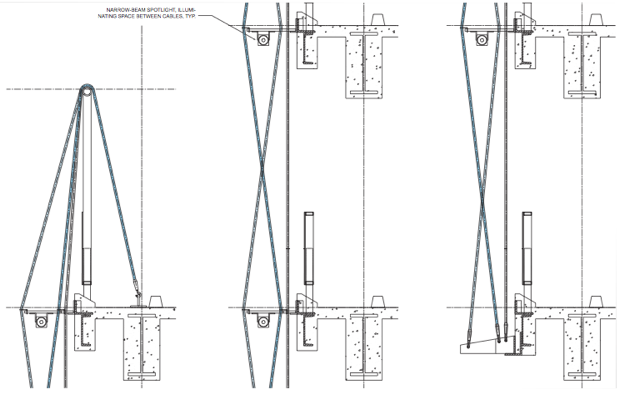 New York City may have the lowest rate of car ownership of any major metropolis in the country, but that does not mean we are without that American icon, the unsightly parking garage. Many of these structures date to the middle of the last century, the golden age when cars were cool–not costly, congestive and environmentally unconscionable–and architecture was formless, slick and sometimes even brutal. Deteriorating and out of style, these ungainly edifices are in need of repairs and a makeover, a project the city’s Department of Design and Construction has recently undertaken, overhauling our parking garages for a new century.

The first such project is the municipal garage at Essex and Delancy streets, behind the McDonald’s on the Lower East Side. New Yorkers could be forgiven for missing the building, but those who know it can probably recall the matchsticks of brown concrete, rusted and crumbling. “The facade is very beautiful but very dated,” Faith Rose, the senior design liaison at DDC, told The Observer. “It’s a very 1950s-era concrete look. I love that era, but it’s deteriorated physically and aesthetically.”

The $4 million renovation, a joint project with the city’s Department of Transportation, is part of the city’s Design Excellence program, which seeks to build and maintain civic projects of the highest architectural quality. From schools to police stations, emergency management bunkers to waste treatment facilities, almost every public building or piece of infrastructure built in the past seven years has benefited from the program.

Most of the money for the Essex and Delancy garage is actually going to more mundane features, like resurfacing the parking floors, installing improved lighting on floors and in stairwells, and repainting the facade. The dramatic twist is a new exterior designed by Michielli + Wyetnzer Architects that strips away those dilapidated concrete panels and replaces them with a dynamic weave of steel cables. “It’s a beautiful light touch that uses the existing building without putting any new demands on it,” Ms. Rose said.

The architects chose the cables because they are part of the typical milieu of DOT engineering. From bridges to berms, cables are a common engineering feature used to keep cars from careening off the road. The metal lanyards are not actual roadside accoutrements—those would have been too expensive and heavy—but instead a nautical gauge wire was chosen for its lightness and durability. One of the challenges of designing the new facade was not adding any new loads to the building, which would necessitate expensive structural work.

Pairs of O-rings are affixed to each floor, one almost flush with the facade and one two feet out from there. The cables are then threaded back and forth up the facade, one set running perpendicular to the street, the other at a slight angle running to the right. The result is a canted steel weave, a loom stretched and awaiting a giant shuttle. Frank Michielli, one of the principals at the firm, said this was meant as a nod to the neighborhood’s heritage as a garment hub a century ago.

Ms. Rose compares it all to a giant piece of op-art, a fitting echo of the downtown art scene. Mr. Michielli said the idea was also to evoke a sense of movement.”As the viewer moves and changes their position by walking or driving by the building, it will change and come alive,” he said. “The idea that there are vehicles inside, giving some movement to the facade, was appealing.”

Returning to the DOT palette, the same reflective paint used on the streets is employed to paint “PARK” on the facade, including sheaths on the wires that can only be seen from afar, another abstract flourish.

The project was awarded a Design Excellence Award on June 20 from the Public Design Commission. The architects are just finishing their drawings, and construction is expected to commence this fall and be completed by June 2013. One other garage, Queensborough Hall Municipal Parking Garage, is slated for a makeover and others will follow as maintenance and budgets dictate.