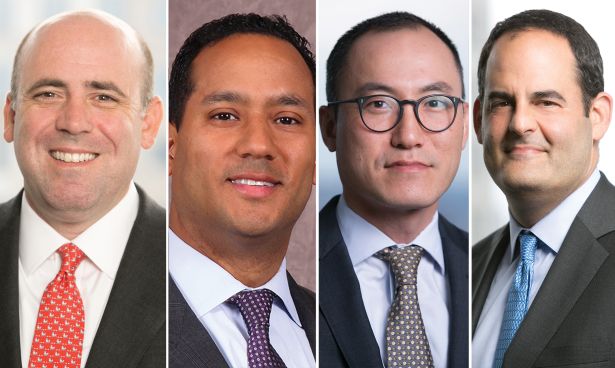 Partner and Global Head of CRE Debt; Partners at Apollo

Apollo’s lending platform continued to go from strength to strength last year, with the firm racking up $14.1 billion in originations.

“For us, things continued to build throughout the year and we had record deployment across property types and borrowers,” Scott Weiner said. “There was also a shift to bigger first mortgages, whereas I would say historically [mezzanine financing] has always been part of our DNA.”

Apollo lent on “a little bit of everything, including office,” Weiner said. “We underwrite every deal, so it wasn’t like we crossed anything off and said, ‘We can’t do that because of COVID — or other reasons.’”

And it showed. Apollo lends on behalf of its insurance company platform’s balance sheet, as well as its public mortgage REIT, providing financing across the capital stack, from long-term, fixed-rate deals to higher-yielding, floating-rate mezzanine loans.

Roughly $8 billion of Apollo’s volume was executed via its insurance company platform.

“We did close to $3 billion of fixed-rate lending across multifamily, self- storage and other property types; then we also did a lot of floating-rate debt,” Weiner said.

Its differentiated balance sheet capital allowed it to offer clients a holistic solution for larger loans as well as provide certainty of execution and flexibility and creativity in structure. In many instances, Apollo provided large loans for both properties and portfolios, enabling it to offer borrowers a single source of capital. Further, the firm’s average loan size increased to upward of $200 million last year.

When it comes to asset classes, “we very much like multifamily,” Weiner said, and although Apollo hasn’t shied away from office deals, or New York office, for that matter, Weiner described the firm as being “cautious” on the sector: “We have a large office exposure but we certainly prefer, and see more value in, newer office or recently renovated office — in terms of what tenants want.”

The recent market volatility hasn’t been a terrible thing for the firm, either.

“We’ve continued to close deals, and have picked up a bunch of transactions where the borrower got retraded by a different lender, or they’re coming to us and saying, ‘I don’t really trust that CMBS is going to be there,’” Weiner said.

Weiner credits his entire team with Apollo’s success, including Catherine Chen and Ben Gray, U.S. managing directors, and also said that diversity, equity and inclusion is “critical” to the Apollo platform. “It makes us better,” he said. “Finance and private equity can always do better, but different perspectives and approaches to the business are key.” —C.C.