The Tribeca ultra-luxury condo building is currently under construction. 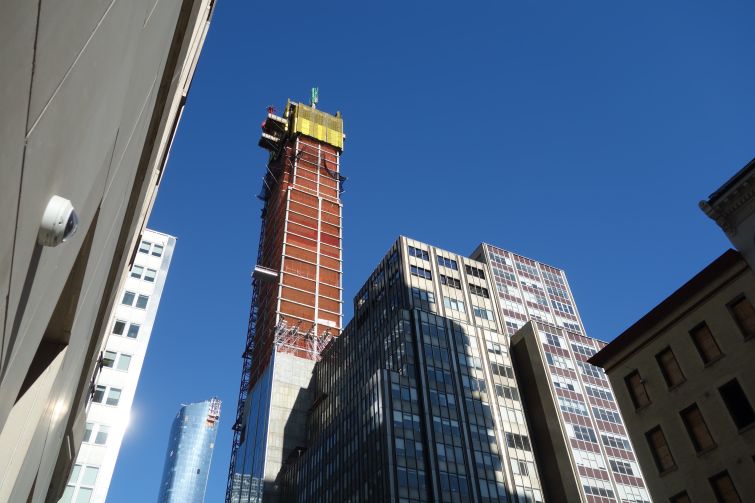 The $108 million senior loan on Soho Properties’ luxury condo tower at 45 Park Place in Tribeca is being marketed for sale, Commercial Observer has learned.

A Newmark team led by Dustin Stolly, Jordan Roeschlaub and Nick Scribani is leading the sale of the nonperforming debt.

The 43-story building — which sits between Church Street and West Broadway  — is currently under construction but nearing completion, after its development stalled in late 2019.

Sharif El-Gamal’s Soho Properties locked in the property’s $219 million construction financing back in May 2016. The capital stack comprised a $174 million senior loan from a syndicate of lenders led by Malaysian bank Maybank and Kuwait-based Warba Bank, and a $45 million mezzanine loan from Saudi investment company MASIC.

At the time of the construction financing, 45 Park Place had an expected completion date of summer 2018, but the senior note sale follows several years of beleaguerment, delays and court battles over the luxury asset that El-Gamal described as “one of the most unique and significant residential towers to come to the sky scape,” in August 2016.

Sales launched in 2017 — with units priced between $3.725 million to $12.3 million — but their slow pace was only further impacted by COVID-19. By May 2020, the lender consortium had moved to foreclose. By July 2021, The Real Deal reported that El-Gamal was busy battling the project’s lender Maybank in bankruptcy court  , with the unfinished building’s value up for dispute. According to the property’s Schedule A, filed March 2015, the building had an initial projected sellout value of $447.6 million.

SOMA Architects is the architect behind the luxury sculptural glass tower, while Pierro Lissoni designed its 50 upscale residences —which feature floor-to-ceiling windows. The building will be crowned by two duplex penthouses, while a high-ceiling lobby greets residents.

Building amenities are touted to include a 50-foot indoor lap pool, a children’s playroom and fitness spaces. The property also includes a cultural center conceived by Jean Nouvel.