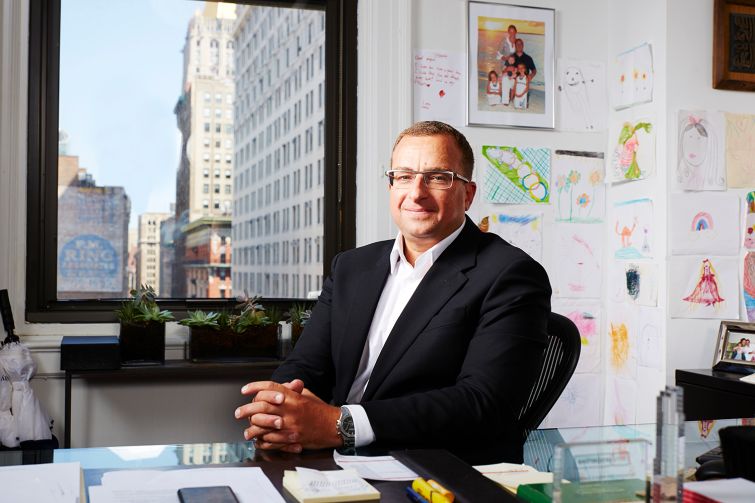 When Sharif El-Gamal was in Dubai a few years back, he found himself at the InterContinental hotel, doing a workout with a personal trainer.

As he finished up the session, the hotel’s owner entered the gym.

You’re the guy building the proposed mosque in New York City, the owner said. (Plans for which have since been scuttled.)

El-Gamal confirmed that he was.

The owner embraced the real estate developer and thanked him for standing his ground.

El-Gamal, the 43-year-old chairman and chief executive officer of Soho Properties (and a practicing Muslim), has traveled a rocky road to developing the property between Church Street and West Broadway in the Financial District. Six years ago, he announced plans to build the Islamic Cultural Center at 51 Park Place. But its proximity to the World Trade Center caused an uproar with El-Gamal receiving death threats to the project and his life.

Reimagined as a museum and less of a mosque, the Islamic Cultural Center is still in the works at the site, which El-Gamal says will be a “jewel box” and will include a 50-unit condominium tower next door at 45 Park Place. In May, he secured a $219 million construction loan for the project led by Kuwait-based Warba Bank and Malaysia-based Malayan Banking Berhad, as well as the Italian Intesa Sanpaolo and Saudi Arabian MASIC.

The catch? He and his company are boasting that this is the largest Sharia Law compliant construction financing in New York City. The Islamic rules, which are laid out in the Koran, ban the practice of collecting interest, forcing lenders to find alternative ways to make money off of a project. The profit to the lenders is still the same, according to El-Gamal—it’s just how they get there that’s different.

Basically, the lender effectively buys the property for an arranged price, and the borrower buys it back in increments over time, according to a 2013 article in the Guardian.

At the same time, El-Gamal—the married father of three young children—and MHP Real Estate Services are redeveloping 560 Seventh Avenue, which will include a new Dream Hotel and glass-and-steel retail cube. Part of the plan also includes a new home at the site for the Garment Center Synagogue, which had a long-term lease at the property. (While the site is under construction, the congregation has been relocated to 1384 Broadway between West 37th and West 38th Streets.)

El-Gamal spoke about this and more with Commercial Observer at his NoMad offices last week.

Commercial Observer: Where are you in the process of building 45 Park Place?

It’s being done with a financing process that is very unique to New York City. Can you explain what that is?

It’s a Sharia-compliant structure that we put together. It’s based on Islamic principals. The financing is a very common global structure. Essentially, it’s the largest syndicated Sharia-compliant construction loan in New York City.

I know it sounds complicated, but it’s actually very simple. It is a distinction without a difference.

Why did you go this route on the property?

It was really an opportunity for us to start essentially bringing on board global investors that have never really participated in real estate transactions in New York.

[We wanted to be] able to start being at the forefront of providing a new financing solution as the markets today have really tightened up. Some of the most prolific, generational developers in New York are unable to secure construction financing. We needed to think outside of the box, but at the same time we were able to lure in and find a captive audience of global investors that are very keen on investing in New York. This was a real opportunity for us to be able to showcase our city and ways of bringing in new pools of money.

Do you think you might have set a precedent here for how developers go forward?

Oh, absolutely. There are a lot of high-profile people in our industry who have reached out to me to see how they can get introductions [to these types of lenders]. At the end of the day, people want to make money and want to make profits. If there is a new way or a new formula to get to the same end result, everybody is going to jump on board.

With all of the development going on in the city right now, what makes 45 Park Place special?

Forty-five Park Place is going to be one of the most unique and significant residential towers to come to the sky scape of the new Downtown. When you have designers like Jean Nouvel, Pierre Lucony and Michel Abboud signing on to a project, it’s a belief in the vision that we have put forward into developing a building that is really going to be painstakingly thought out with every single detail and finish, and it’s a neighborhood today that really is evolving.

Every time I go down there, I get emotional. I get goose bumps. Every time I walk by the site and see what Silverstein Properties was able to put together down at the World Trade Center, it is such an incredible gift not just to New York but, I think, to the world.

I saw the future of this neighborhood. I never imagined that it would blossom to the level that it has. That’s really what a developer has the ability to do: to find a unique perspective.

What was it like for you to go through a progression personally in which you turned 51 Park Place and this Islamic Center into this residential tower?

[It was] one of the biggest tests and one of the biggest blessings of my life. It opened up the world to me. It gave me incredible exposure that I would have never gotten. I feel very blessed, fortunate and grateful that our vision of bringing people together is moving forward.

How is the Islamic museum next to the tower going to differ from the original plans?

The intention is still the same: showcasing my practice and my faith and helping really bring people together and also making a contribution in the rebuilding of the new Downtown.

One of the really key wins in the project was bringing on board Jean Nouvel, winning his trust and, literally, immediately in the first phone call, him agreeing to work on this project. You have a Pritzker Prize-winning architect, whose commissions today are astronomical, immediately on the first phone call, committing and saying, “I would love to be with you on this one.”

We have Cooper Roberts, who just finished doing the Whitney Museum and one of the most important American museum builders, being his partner on the ground in New York.

I can’t share with you everything about it just yet, but I can tell you that it will become an absolute jewel. It’s going to be a landmark, and it’s going to further cement the rebirth of Downtown. And it’s further going to contribute into what is evolving in that submarket from a cultural standpoint.

It’s coming at an interesting time, given the Muslim-focused rhetoric going on during the presidential election. Do you have any thoughts on that?

There’s really a presidential election going on? Is there? All that I’m going to say is that it’s the opposite of what I do and what my firm does every day in working on ways of bringing people together and contributing to the world. It’s done a lot of damage for our country, and it’s done a lot of damage to the Republican Party. It is not what this idea of America is about; it is the absolute opposite.

Are you a Democrat, Republican or independent?

It feels like a lot of New Yorkers are going the way of Michael Bloomberg, being somewhere middle of the road.

You’re probably one of the few Muslim developers in the city. What’s that like?

It’s pretty cool to be one of a kind.

Do you see more coming down the pike?

I hope not. I’d like to be the only one for a little bit.

There’s also the intrigue that you are Muslim and you’re developing this synagogue. How did you get involved in this project?

It speaks to how we have really established ourselves at Soho Properties as one of the credible buyers of real estate. This company has been around since 2003, and we’ve executed in excess of $1 billion worth of deals in Manhattan. One of the real titans in our community, [Robert] Knakal, who is maybe one of the most prolific brokers, gave me a call and said, “I have a building for sale, Sharif. Can you take a look at this one?” That speaks to our ability to buy, close and execute on real estate deals.

The challenge was that there was a synagogue that had a 70-year lease, paying $1 a year in rent. The first criteria was that there needed to be a trust that was established between the buyer and the congregation. We won the trust of the rabbi, of the elders, and today we’ve built them a beautiful synagogue at 1384 Broadway.

It’s a real honor, and I’m always grateful to God that I’m able to serve. Some people say that Muslims and Jews are cousins. I think we’re brothers. It’s such a feeling of gratitude.

How did you gain the trust of the rabbi and the elders?

By listening to their needs and also giving them a perspective on how we can further enhance their legacy. That’s what a developer brings to the table is that they’re able to see what others are not able to see.

And the synagogue is going back in when the project is done?

What role is MHP playing in the process?

I did bring in MHP and [its President and CEO] Norman Sturner. They’re at the forefront of working on the retail with us. They’re one of the most established investors in New York City, so that further speaks to the project and to the location. They’re really spearheading our retail initiatives.

Tell us about your upbringing and getting into real estate?

I was born in Brooklyn. I’ve lived in Egypt; I’ve lived in Liberia. But I’ve always come back to New York. I’m a New Yorker at heart. I’ve been in the real estate business for close to 17 years. I really started at the bottom. I started out as a rental agent, and I’ve never looked back.

How did you go from rental agent to developer?

Next interview. It’s too long of a story.