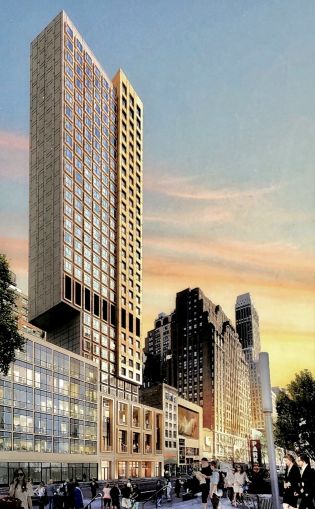 The lender on the Chetrit Group’s 33-story under-construction hotel near Pennsylvania Station took to the courts to force Chetrit to complete the project or fork over more than $100 million in construction costs.

An entity tied to Maverick Real Estate Partners, which bought $110 million in debt on the development at 255 West 34th Street last year, alleged that Chetrit failed to pay back the loans after they matured in April 2022 and didn’t finish the hotel by the end of 2021, despite promising to do so under its financing agreement.

Maverick wants Chetrit and President Meyer Chetrit, the debt’s guarantor, to pay $19 million to cover the principal of the loans and interest, and to either complete the project or give Maverick the roughly $106.4 million it would take to finish the hotel, according to a suit filed in New York County Supreme Court Monday.

But it’s unlikely Chetrit would get to keep the finished product since the 155,594-square-foot hotel development is scheduled to be sold at auction Jan. 18 after Maverick foreclosed on the property in November, Crain’s New York Business reported.

Spokespeople for Maverick and Chetrit did not immediately respond to requests for comment. Maverick’s lawyer, Katsky Korins’ Steven Newman, declined to comment.

Chetrit purchased the site as part of an assemblage of retail assets in 2014 and began work on building a 323-key hotel in 2019, with plans for IHG Hotels & Resorts to operate it, Crain’s reported. It secured financing from Arbor Commercial Mortgage to kick off construction, but the project stalled during the pandemic.

Maverick bought the debt from Arbor in May 2022 and asked Chetrit to pay up two weeks later since the loan had matured. However, Maverick and Chetrit negotiated an agreement to extend the repayment date until Oct. 30, according to the suit.

Even with the new deadline, Maverick claimed that Chetrit failed to come up with any of the cash and skipped out on property taxes on the site — another breach of its loan agreement.

Chetrit isn’t the only landlord Maverick went after on Monday. Maverick sued Thor Equities to force it to sell its Meatpacking District retail building at 446 West 14th Street after Thor allegedly missed payments on about $25 million in loans on the property, Crain’s reported.