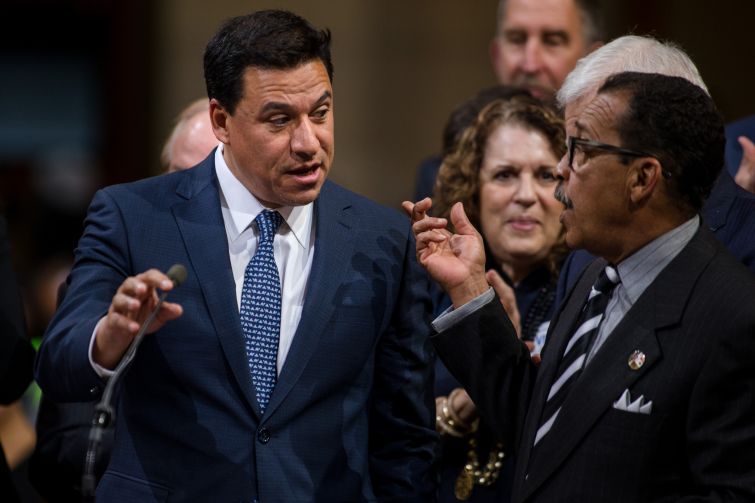 Former Los Angeles Councilman Jose Huizar on Thursday admitted that he extorted at least $1.5 million in bribes from real estate developers, and he agreed to plead guilty to racketeering and tax evasion.

Huizar conceded in federal court that he was the leader of a criminal enterprise that entangled lobbyists, consultants and other city officials “through a pay-to-play scheme” via his role in the city’s approval process as the head of the city’s influential planning and land use committee, the Los Angeles Times reported.

Prosecutors agreed to request a sentence of 13 years in prison at most, and Huizar promised not to ask for fewer than nine years. The sentencing has not been scheduled.

Huizar was the primary target in an investigation that led to charges and convictions of real estate developers, consultants, a political aide, a lobbyist and former Councilmember Mitchell Englander. Huizar was indicted on 34 charges of bribery, racketeering, money laundering, extortion, wire fraud and tax evasion. The criminal enterprise garnered cash bribes, prostitution services, gambling trips, and other illicit gifts and campaign donations.

Huizar used his position to advance multiple Downtown high-rise projects through the approval process. That included a proposed 77-story tower Downtown that was never built, but the developer made a $600,000 payment to Huizer to help Huizer settle a sexual harassment lawsuit filed against him by a former staffer.

Former Deputy Mayor Raymond Chan, the final major defendant in the scandal to face charges, is scheduled for a racketeering trial next month.