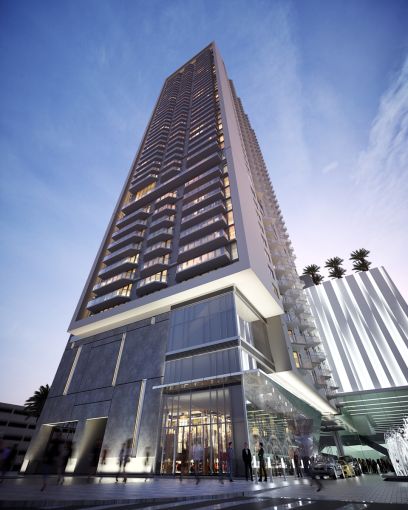 The Moinian Group scored $185 million from Square Mile Capital Management to refinance its residential property inside Miami Worldcenter, the mega-development in the heart of the Magic CIty.

The 43-story tower, Bezel Miami, features 434 units, which are nearly all leased. The 355,435-square-foot building hit 90 percent occupancy in September, said a representative for Moinian. A two-bedroom apartment, spanning 1,057 square feet, is now renting for over $4,448 a month.

The building, located at 650 NE Second Avenue, one block west of the Freedom Tower and Biscayne Boulevard, was completed just last year.

Moinian initially partnered with Zom Living on the property, providing both a $119 million loan and $23.7 million in equity for the project in 2019. The Orlando-based Zom Living had purchased the 8,428-square-foot site for $19.5 million earlier that year, according to property records.

However, Moinian is now the sole owner of the project. While records still list Zom as Bezel’s owner, the firm is “no longer involved” with the property, Zom CEO Greg West wrote in an email without providing additional details. A representative for Square Mile Capital Management confirmed that Moinian co-developed the property with Zom, and Moinian later bought Zom out.

“Despite recent market volatility, we expect to see robust tailwinds in this region supporting luxury assets such as Bezel,” Eric Cohen, Square Mile Capital’s managing director, said in a statement.

Bezel was one of the first properties completed within Miami Worldcenter, a 27-acre master development in Downtown Miami. Other projects under development include the Related Group’s The Crosby condo, Royal Palm Companies’ Legacy Hotel & Residences as well as a residential project by former WeWork CEO Adam Neumann and a mixed-use project by The Witkoff Group, among others.

Correction: Sephora and Lululemon will open at Miami Worldcenter, but not inside the 80,000-square-foot retail building as previously reported.