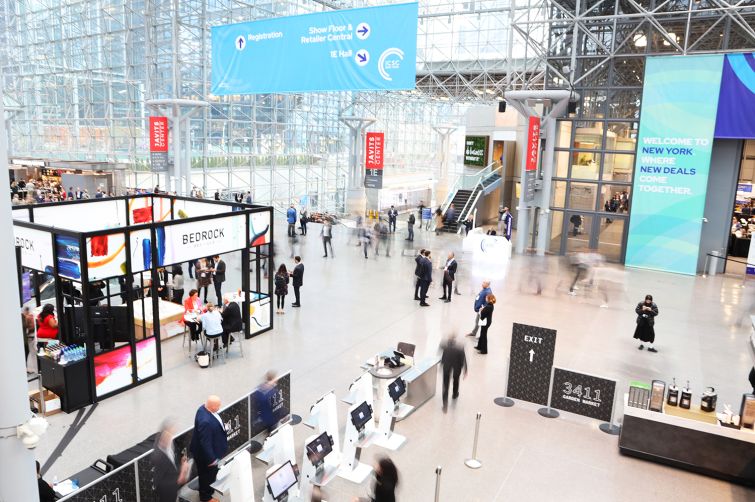 I scream, you scream, we all scream for ICSC. Well, not quite all of us this year.

The Innovating Commerce Serving Communities (ICSC) New York conference unfolded on Wednesday and Thursday, but not exactly with a bang. About 7,000 brokers, retailers and landlords poured into the Javits Center on Manhattan’s far West Side  — less than the 10,000 or so who attended the conference in 2019, according to Stephanie Cegielski, vice president of research and public relations for ICSC.

“We are kind of all coming back, and there is still some hesitancy,” Cegielski told Commercial Observer. “People are still a little bit cautious. … I think it’s part of the recovery.”

The ICSC conference returned to New York after a pandemic-caused hiatus and two years of trouble for not just the retail market, but for ICSC itself. The 65-year-old New York-based trade organization unceremoniously laid off a chunk of its workforce in 2020 and saw its membership dwindle from 64,200 active members in 2018 to 45,000 in August 2020, The Real Deal reported. ICSC’s legendary conference in Las Vegas saw 22,000 attendees this year — 2,000 more than it expected but less than 2019’s 30,000 or so guests, Cegielski said.

Trade conferences like ICSC might become a thing of the past thanks to the pandemic pushing more work online, Cory Zelnik, founder and CEO of Zelnik & Company, told CO. And plenty of brokers bemoaned the high cost to attend ICSC — roughly $975 for members and $1,800 for non-members who registered before the first day of the conference, according to ICSC’s website. (Retailers, however, got in for free.)

“I think technology has impacted it,” Colliers retail broker Jake Horowitz said. “Now you can [Microsoft] Teams people, you could Zoom, and, during COVID, everyone got very used to doing that. And I think it’s cost-conscious. It’s not a cheap show.”

An uptick in COVID-19 cases in New York City, fears of a triple-demic with the flu and RSV virus going around, and companies tightening their belts (and headcounts) amid fears of a recession all could have helped to reduce attendance, Horowitz added. Plus, the pandemic likely weeded out some brokers, and others could have turned to spaces outside the conference floor to do in-person deals fee-free, Brian Katz, the CEO of commercial brokerage Katz & Associates, added.

But those recessionary fears didn’t dampen the mood at ICSC itself. Masonre’s David Abrams said he was able to pack the two-day conference with meetings. Horowitz said he got to meet not just potential clients, but more of his Colliers colleagues. Brent Glodowski, a director for Avison Young’s tri-state investment sales, said the conference felt plenty packed to him, especially after hosting back-to-back meetings on Wednesday, though he understood that it might be more efficient for firms to handle their business online. And ICSC expects to see a 10 percent increase in attendance next year, Cegielski said.

“The attendance has been beyond our expectations,” Glenn Rufrano, ICSC’s chairman, told CO.

The mood among retail brokers was especially upbeat at ICSC’s after-parties on Wednesday, where cannabis brokers rolled joints outside of the packed Irish pub Scallywag’s, gathered in Olly Olly Market for some lighter fare, or drank in a chic three-story SoHo space on Lafayette Street. But it remains to be seen whether it was the return to a deal-filled, in-person conference or the booze (and the bud) that was cheering them up.