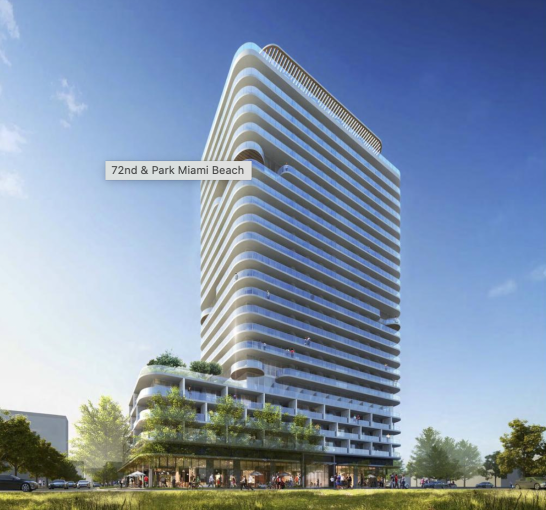 The 21-story development, 72 Park, will include 266 units, a parking garage and ground-floor retail, according to filings made to Miami-Dade County. Located at 580 72nd Street, the residential project faces The North Shore Park & Youth Center, spanning a full block.

The joint venture assembled the 1.7-acre site between 2015 and 2016, paying about $17 million in total, according to property records. The firms, both of which are based in the Miami area, first secured a $15.3 million loan from Synovus Bank last year, of which nearly $7 million remains outstanding.

Now Ocean Bank, acting as administrative agent for a group of lenders, assumed the existing loan and upped it by $97.5 million, bringing the total financing to $104.5 million, per mortgage documents. Demolitions of existing properties to make space for 72 Park began in August and construction got underway last week, according to filings made to Miami-Dade County.

At the southern end of Miami Beach, GFO is developing Five Park, a luxury condominium tower, with David Martin’s Terra, having secured a $345 million construction loan last year. Galbut also secured approvals to redevelop a low-rise property in South Beach into a boutique hotel this year.

Representatives for Lefferts Investments, a boutique firm with investments in Miami and New York, and GFO Investments could not be reached for comment.