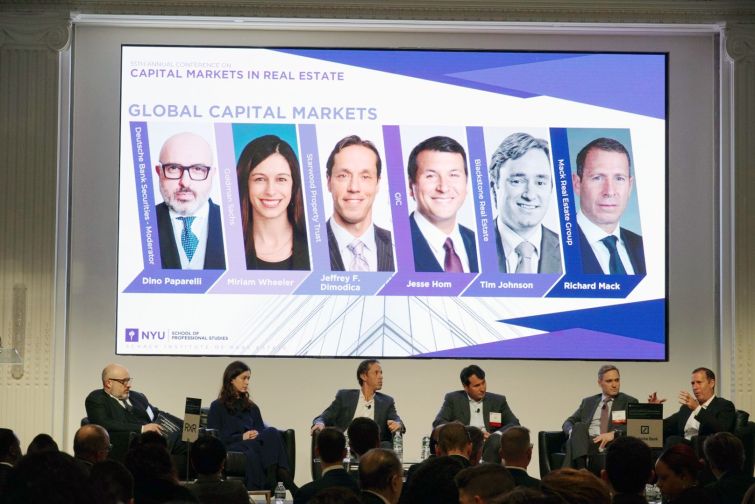 The banking lending freeze that has hit the commercial real estate debt markets in the second half of 2022 will likely not thaw anytime soon.

The grim forecast that banks will largely remain on the sidelines well into 2023 and perhaps beyond was the sentiment among leading lenders at the 55th annual New York University－Schack Institute of Real Estate Capital Markets conference Tuesday, underscoring severe headwinds confronting CRE valuations. Banks began to step aside from underwriting loans after an active first half of the year once the Federal Reserve announced the first of four consecutive jumbo rate hikes on June 15 — bringing rates to a range of 3.75 percent to 4 percent compared to the near-zero short-term borrowing in early 2022.

“There is very little back leverage in the system,” Richard Mack, CEO and co-founder of Mack Real Estate Group, said during the NYU conference’s global capital markets panel held at The Pierre Hotel in Manhattan. “Eventually I think the banks will come back, but it probably will take a year, maybe two years.”

Mack added that the absence of large banks in the lending space has resulted in many borrowers instead seeking transitional loans at higher interest rates. He noted that increased regulatory requirements spurred by the Dodd-Frank legislation passed by Congress in 2010 create more complexity for these institutions to fully engross themselves again in the CRE lending world.

Jeffrey DiModica, president of Starwood Property Trust, said the federal government’s increased reserve requirements present a bigger hurdle than rising interest rates toward banks returning full force into the CRE debt markets. Until banks are able to loosen up their reserve numbers, they will remain “stingy” with CRE loans, DiModica said, and that will have an indirect effect on alternative lenders.

Wheeler stressed that many banks “dramatically” increased their CRE exposure in the first half of 2022 and now have backlogs they need to sell in an uncertain environment and are cutting back on lending as they prepare for a possible recession in 2023. She also added that banks have less incentive to make direct loans in the current regulatory landscape since warehouse loans receive much better capital treatment from regulators.

“The banks that are active are very focused on a credit box that is pretty prescriptive,” said Wheeler, noting that the few deals they are seeking out require healthy debt coverage service ratios. “They’d much rather buy a new originated loan that really checks all those boxes versus buying something cheap.”

Banks are confronting much uncertainty with interest rates at a time when there are also many unknowns facing a number of CRE properties, especially in the office sector, due to increasing hybrid working trends spurred largely by the COVID-19 pandemic. DiModica noted that Starwood brought its office exposure down to about 20 percent compared with 40 percent pre-pandemic, and at the moment does not see any opportunistic deals with this asset class because of the high amount of cash flow needed to cover high spreads.

While CRE properties weathered past market volatility, including major inflationary pressures during the 1970s, Mack cautioned that headwinds facing sectors like office and retail provide a far different challenge this time around.

“It’s not so easy to get to the other side when the bank is calling and you can’t afford to pay your debt service,” Mack said. “I think we’re going to have a tremendous amount of volatility coming through this period.”