Amid layoffs and a worsening economic climate, the herd of commercial real estate brokers is thinning 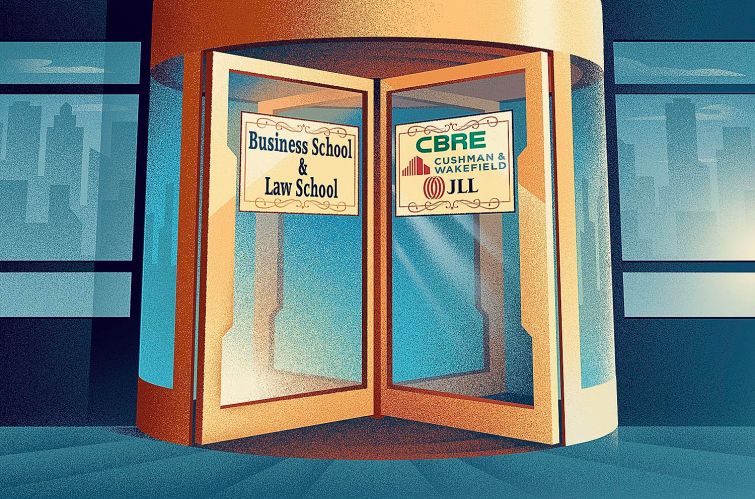 Amid layoffs and a worsening economic climate, the herd of commercial real estate brokers is thinning. Illustration: Kevin Fales

When the coronavirus pandemic swept through the world in March 2020, layoffs cut through commercial real estate. But while COVID-19 restrictions have largely been lifted in the U.S., brokerage firms are again tightening their belts amid an uncertain economic climate, putting pressure on young professionals to abandon an increasingly volatile, and less profitable, industry.

For brokers who remember the office market of 2019, those relatively high occupancy rates and asking rents might seem like a far-off dream compared to now. Today’s concrete jungle remains marred by high availability rates and remote work, which threatens office property values nationally. Plus, a slowdown in deals driven by higher interest rates has pushed commercial brokerages like CBRE and JLL to cut staff while others re-evaluate their projected earnings.

All in all, New York City’s commercial real estate brokers are starting to feel the walls close in.

“I think, irrespective of title, it’s going to be a thinner brokerage community in the next two years,” one JLL broker told Commercial Observer.

JLL spent $9.4 million to pay severance to canned employees in the third quarter, eight times the amount it spent on such costs in the same period in 2021. CBRE announced plans to reduce its expenses by $400 million, with $300 million of that sum mostly coming from staff reductions, the firm announced in its third-quarter October earnings call. Cushman & Wakefield said it would lay off an unspecified number of workers in March 2020, CoStar reported. Residential real estate is also feeling the burn, with Zillow, Anywhere Real Estate, Compass and Redfin all laying off workers in the past few months.

Even the firms not cutting staff are seeing slimmer margins. While Newmark hasn’t announced layoffs, its third-quarter revenue fell 16 percent to $664.6 million thanks to a slide in investment sales, CoStar reported. JLL brought in just $140.2 million in the third quarter — a 41 percent revenue decline compared to the same period last year, according to its third-quarter earnings report. And Colliers’ net earnings declined 12 percent to $44.5 million in the third quarter from a year ago, according to CoStar.

But it’s not just layoffs that are pushing young people out of commercial real estate — it’s the pay.

While successful brokers can make it big, early career professionals run the risk of earning nothing, or almost nothing, because the field is commission-based rather than salaried. Occasionally older brokers will sponsor younger staffers through something called a “draw” — a debt that a younger broker pays back when they begin to make money — and companies like JLL and Savills offer funds to workers who are just getting started. But in a tough market, real estate can be more risk than reward.

One former office tenant representative, who spoke with Commercial Observer on condition of anonymity, said they left the field this year in part because of the economic climate and lingering impacts of the pandemic, which hit three years into the broker’s career. The fact that their salary was entirely made up of commission from office deals, one of the most embattled asset classes, didn’t help, they added.

“Even if you had a great year, the next year you’re starting over again, so in an environment like the past few years that was kind of a tough pill to swallow,” the ex-broker said. “Most of my friends, younger people, either left the business or went to different companies.”

Out of Commercial Observer’s 30 Young Professionals profiled in 2021, at least three have left commercial brokerage for other industries or graduate school, according to LinkedIn. And that’s on top of the departures and layoffs of 2020, when Avison Young cut its tri-state workforce in April, Marcus & Millichap announced a 20 percent workforce reduction in May, and CBRE and JLL both scaled back their crews throughout the year.

“During the pandemic, it was definitely harder for the younger brokers because one of the few ways to make money was servicing your existing clients that maybe had a lease expiring and were forced to transact,” Evan Margolin, a tenant representative for JLL, said. “Young people in the business don’t have as many clients. They don’t have as many of those chances to make money. There was almost zero optimism.”

Many hoped the market would bounce back in New York City, as office occupancy slowly ticked up and tourists returned to the Big Apple. But layoffs and turnover still hit brokerage firms hard in the third quarter of 2022, and those moves have the potential to hurt young brokers’ careers in other ways.

For large firms, layoffs tend to coincide with sluggish hiring, and “the brunt of that slowdown” is borne by young professionals, said Sam Chandan, the director of the Chen Institute for Global Real Estate Finance at New York University. Promotions at major companies are often based on revenue production, hampering a younger broker’s ability to move up the corporate ladder in a tough year, the JLL broker said. And early pandemic cutbacks on expenses, layoffs of poor performers and a lack of optimism about the future of the office market harmed morale, Margolin added.

“I think there was a decent amount of younger people who decided to drop out,” Margolin said. “If I was just getting started, maybe a year in when the pandemic rolled around, I might rethink whether being in real estate is the best use of my time.”

Brokerages are well aware of the problems young workers face. For years, companies have tried to create programs to address the limits of commission pay, including the challenges it creates in recruiting diverse employees, Chandan said.

Women already earn 51 percent less on commission bonuses than their male counterparts, while Black, Asian and Hispanic women earn between 71 percent and 74 percent less than their male colleagues on commission, according to a Commercial Real Estate Women Network study. Without earning a base salary, it can be more difficult for brokers from lower-income households to get into the field and stay there, Bisnow reported.

“In part because of the commission structure, the capacity of a young person to ride out a slowdown, or manage through a slowdown, depends to a certain degree on their own means,” Chandan said. “While these programs have not been introduced with an eye towards how we manage downturns or slowdowns in the business, it is at times like this that [we will see] their true impact and ways in which they are positively impacting the industry.”

Savills launched its junior broker development program in 2020, where between 10 and 15 young, mostly female or minority staffers receive a salary for two years and rotate throughout the company’s research and transaction teams, said Ann Duncan Inman, the firm’s chief strategy officer and diversity officer. Out of Savills’ 650 brokers nationwide, roughly 40 have gone through the program in New York, Los Angeles, Chicago and Atlanta, among other cities.

“Some of our junior brokers tell me that their friends who’ve gone to work with other companies are jealous that they’ve got a salary and they’re not having the draw pressures on them,” Duncan Inman said. “This is a difficult industry to get into really at any time, and obviously a rough economy makes it even more challenging, but we’ve been really fortunate that we made the decision a few years ago to double down on investing in younger professionals and diverse professionals entering our company.”

Of those young brokers who have participated in the program, roughly 80 percent are still with Savills, and the brokerage has no plans to conduct layoffs, Duncan Inman added.

In September, JLL launched “JLLU,”  a program offering 35 young brokers training and networking opportunities, with plans to replicate it for three more classes next year, according to Katie Duncan, JLL’s head of human resources for the Americas. The company also started a broker diversity fund earlier this fall, which provides a salary to young professionals for two years instead of a more traditional draw, and JLL does not plan to institute hiring freezes or pause either program given the economic turbulence, Duncan said.

“I think a program like JLLU is committed to empowering the brokerage organization, so I think it will help us to retain the talent, but it also helps them kick-start their career and accelerate their ability to generate revenue even faster and even in a more difficult economic climate,” Duncan said.

Meanwhile, CBRE offers its own rotational Wheel program, and Avision Young lets its senior professionals provide younger brokers with a base salary for up to three years, though it declined to disclose the amount. Representatives from CBRE and Colliers declined to comment. Representatives for Newmark and Cushman & Wakefield did not respond to requests for comment.

“Avison Young is committed to helping position new real estate professionals for success,” a representative for Avison Young said in a statement. “Once our professionals have the necessary development, tools and network in place after three years, they are then transitioned to the more traditional commission-based environment.”

With a robust educational program and employee resource groups, brokers should be able to better navigate a downturn and have a stronger sense of the industry, Savills’ Duncan Inman said. And, while the outlook may appear dark, both Margolin and Duncan Inman said the brokers who do stick with the field today could become the industry’s stars of tomorrow.

“The times are always challenging, and the best transactions are done during challenging times,” Margolin said. “So there is a window of opportunity for brokers to make great deals in these challenging markets. It’s just fewer of them.”