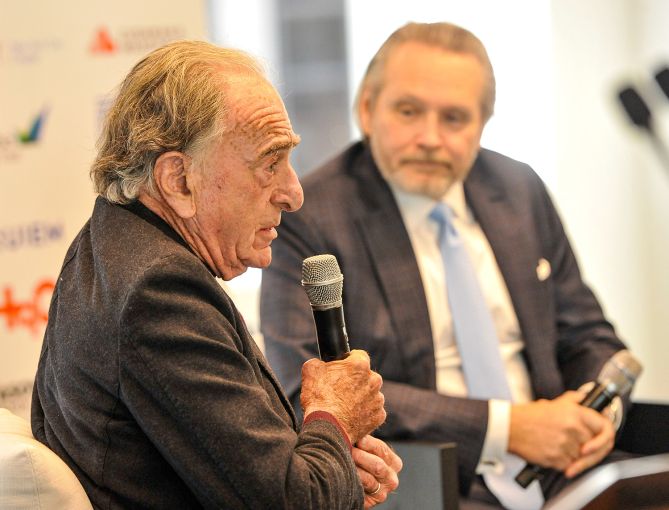 Fortunately for industry leaders, it wouldn’t be the first economic storm they’ve weathered; in fact, most of the panelists at Commercial Observer’s “State of CRE” event on Thursday seemed to regard uncertainty in the market a little like an old cowboy handling a spirited horse.

They’re aware there’s danger, but it’s a minor inconvenience because they’ve done this before. Some of the old hands present were Harry Macklowe and Bob Knakal, while Don Peebles III, executive vice president of The Peebles Corporation, and Andrea Catsimatidis, principal at Red Apple Group, offered insights into what the next generations of CRE leaders are seeing in the market.

One of the many clouds on the horizon discussed was flight to quality and what to do with those old, passé office buildings. The answer for many speakers on the seventh floor of the Durst Organization’s 1155 Avenue of the Americas was simple: Inject capital into assets, and give them a boost. But with caveats.

“How much do I have to invest to bring this property back to a level where it will be attractive? And does the math make it worthwhile? Those are the questions we have to ask,” Bruce Mosler, chairman of global brokerage at Cushman & Wakefield, said on the stage. “Next year, we’re going to have another challenge because we’re looking at the headwinds of both geopolitical economics and macroeconomics converging, and a result of that is that we may see corporate America go on pause.”

Amenitizing seems to have become the industry standard for leveling up a Class B or C building. Taconic Partners’ Colleen Wenke, in particular, said the company didn’t need to amenitize Essex Crossing in the same way as other buildings. That’s partly because of its Lower East Side location beyond the bounds of the usual office sectors of New York City, but also because Taconic built a new home for the famed Essex Market that had previously sat for generations in a geriatric structure on the north side of Delancey Street.

“Essex isn’t really about one amenity being the hot topic. It was more about that entire kind of neighborhood and what offering that brought to [Verizon, the primary tenant],” Wenke said. “I think you have to look at the attributes of the building, the staff you have there if you don’t have the ability to build new and figure out what works.”

During closing remarks, Macklowe explained that he had built 510 Madison Avenue with a swimming pool and other recreational facilities a decade ago. Rather than leasing that space to a gym like Equinox, his company, Macklowe Properties, hired staff to run the space directly.

“I didn’t realize how clairvoyant that was at the time because now that’s what everybody is trying to do,” the billionaire said. “In my office buildings, I’ve tried to give a touch of difference to them, whether it’s the lobby, the public spaces or the attitude that the tenant is always right and you should take care of the tenants’ needs.”

Basically, she’s putting her money on South Florida, and St. Petersburg in particular, where the firm is building the tallest residential building on the Sunshine State’s west coast.

“I remember a long time ago, we did a 1031 exchange and got this great deal. But the deal was in the middle of nowhere,” Catsimatidis said. “Density is the No. 1 thing that we do consider. The other thing is the business environment and the tax rates. So, of course, that made South Florida very attractive to us.”

New York City may have attractive attributes that cannot be replicated elsewhere, but Peebles is seeing talent within its organization looking straight to South Florida. For example, college grads are putting Miami at the top of their list of places to launch their careers.