In Southern California, the Inland Empire’s rents have grown 11.6 percent over the last 12 months 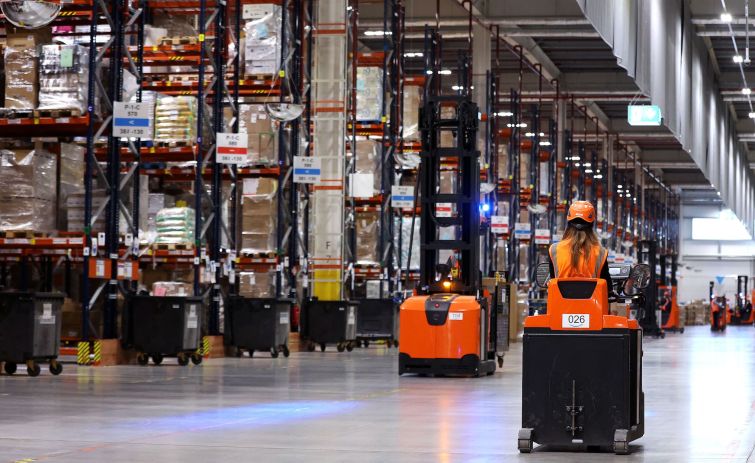 Since summer, the number of jobs in the industrial sector has fallen, with October representing the fourth consecutive month of job losses. Photo: RONNY HARTMANN/AFP via Getty Images

The nation’s industrial development pipeline is still growing, now at 713.6 million square feet under construction, and vacancies remain low, signaling that demand continues to outstrip supply and new deliveries, according to CommercialEdge’s most recent market report, which covered 2022 through October. But the sector has sustained body blows from an uncertain capital markets environment, according to the report.

“The construction pipeline volume is tremendous; however, with vacancy rates still hovering around 4 percent nationally, there continues to be an appetite for that space to be delivered,” CommercialEdge’s Peter Kolaczynski said in a statement. “It does seem likely the rate of construction backs off this current record pace getting into 2023, though.”

Major logistics providers, such as Blackstone’s Link Logistics, paint a picture of cautious optimism for the sector, CommercialEdge reported. Prologis forecasts that the frantic pace of logistics leases will normalize in coming months. The mega-REIT also stated it will slow speculative projects and favor developments with committed tenants, but still said deliveries for the industrial sector will remain historically elevated the next two years.

Amazon — the industry’s largest employer — has abandoned or delayed the opening of dozens of distribution facilities across the country, and admitted in earnings calls earlier this year that it hired too many fulfillment center workers in 2021. Amazon has started development on just three projects this year.

But despite this pullback, shipping and logistics continue to drive the development pipeline. With nearly 350 million square feet already being delivered this year, the national vacancy rate has also steadily fallen throughout the year.

“We expect that demand for industrial space will remain strong in coming years, although it is unlikely that the torrid pace at which the sector grew during the pandemic will be seen again,” CommercialEdge reported.

Approximately $71.9 billion of transactions closed in the U.S. at an average of about $128 per square foot, according to CommercialEdge — in other words, 561.7 million square feet of space. Sales are still near record levels, but they started to cool as capital has grown more expensive after the Federal Reserve hiked the Fed funds rate.

National in-place rents for industrial space averaged $6.95 per square foot in October, growing 6.2 percent year-over-year, and seven cents higher than the previous month. Separately, the premium paid by a tenant signing a lease over the past year continues to grow, with new leases costing $1.54 more per square foot than the national average for all leases.

On the East Coast, Boston’s rents grew 8.9 percent in the first 10 months of 2022, and the New Jersey market saw 7.2 percent growth, according to CommercialEdge’s report. Nearly 13 million square feet of space is under construction in New Jersey, which was one of the few markets where total sales volume did not fall year-over-year in the third quarter after closing more than $2.87 billion in sales at $176 per square foot.

Miami’s average rent was at $9.57 per square foot, which is 6 percent higher than last year, and its vacancy was 3.3 percent.