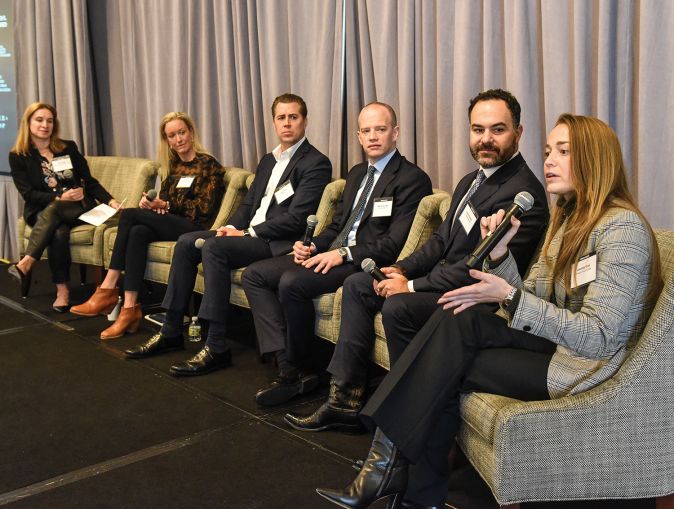 Even on a day that delivered positive inflation news, lenders and brokers were bracing for choppy waters ahead at Commercial Observer’s seventh annual Fall Financing CRE Forum in New York last week.

The event, held Nov. 10 at the St. Regis Hotel, kicked off just as data was released showing U.S inflation slowed in October to its smallest yearly increase (7.7 percent) since the start of 2022, giving some glimmer of hope to commercial real estate financiers that the Federal Reserve may soon curb its hawkish strategy of jumbo rate hikes — but sentiment in the room suggested plenty of pain ahead.

“We have had a massive move in rates in a very short period of time and the market has essentially been frozen for the better part of four to five months right now, so I don’t really see the catalyst for that changing near term,” Dennis Schuh, chief originations officer at Starwood Property Trust, said during the forum’s first panel, “A Different Year: Pivoting, Adapting & Competing for Success.”

“A lot of people by our nature want to go on offense, but we’re also fiduciaries and we have other people as part of our investment committee that say, if you don’t need to make a loan why make a loan?” Schuh added.

Schuh said he doesn’t expect interest rates to peak until around late 2023, and that until the Fed signals stoppage of its rate hike policy that CRE loans will remain on the low side. Low investment sales activity is also hampering the CRE debt markets as well, which is a huge driver of Starwood’s business.

Another near-term obstacle to CRE lending conditions opening up again is banks needing to clear out balance sheets — a process that will take time in the current environment.

“Between the CMBS and CLO markets opening up their balance sheets and getting through Fed stress tests, it’s going to take some time,” said Michael Eglit, managing director & head of U.S. originations at Blackstone. “Banks drive the lending system.”

Stolly said he is hopeful that the positive inflation news will stem the tide of large rate hikes and bring more stability into the market. He said that “interest rates need to settle in somewhere in order for CRE investors to factor in cap rates into their deals.”

While rising interest rates have prompted the debt markets to freeze up of late, the conditions can also benefit lenders in a number of ways, according to Hellinger. For example, lenders can loan money at lower loan-to-value ratios with higher yields that can also be achieved unlevered.

However, Hellinger said he expects a number of balance sheet lenders to become obsolete in the near future without as much access to the capital markets and commercial mortgage loan repurchase facilities (also known as “repos”). He noted that the past five years paved the way for a big expansion of balance sheet lenders due in part to a surging collateralized loan obligation market and repos, but as these financing tools dry up the number of players could shrink back to 2015, 2016 levels.

“The depth of the lending market is going to become a lot more shallow,” Hellinger said. “The days of competing with folks that we hadn’t heard of who are then going to flip A notes or rely on the capacity of their repo counterparties — that’s probably not going to [exist again] for quite a while.”

Indeed, increased capital costs in an elevated interest rate environment is affecting how CRE investors deploy capital. Lending opportunities are limited, with many borrowers pursuing deals only in cases of needing a refinancing or buying assets on the cheap in an opportunistic play.

“The flows of lending opportunities are limited,” said Warren de Haan, managing partner and co-CEO of Acore Capital, said during the second panel, “A Candid Outlook on the 2023 Market.” “Borrowers don’t want to borrow money at 8 to 9 percent when they were borrowing at 4 percent.”

De Haan noted that widening credit spreads will tighten if there is a “resurgence” of bond buyers entering the CMBS market, which will help boost liquidity for base interest rates. He said the liquidity crunch is “problematic” since it will result in a lot more loans on balance sheets, plus less refinancings along with increased discussions of extensions between borrowers and lenders.

Liquidity headwinds are compounded by changing behaviors during the COVID-19 pandemic — especially with office properties, due to hybrid working trends — which de Haan said is causing major credit problems for the CRE market.

“The issue from a credit perspective, independent of protracted illiquidity, is going to be things that are changes in behaviors, and that points directly at the office sector,” de Haan said.

Foggie said in early 2022 there was strong demand for Citi’s CRE properties hitting the market, but today it is common for investors to walk away from transactions, even after putting down a cash deposit, due to financing collapsing on the back end. The market volatility has caused Citi to pull back on deploying capital to assure it is well capitalized with a strong balance sheet ahead of possible more headwinds facing the CRE industry in the next quarter.

“We think it might get relatively tumultuous heading into the finish of this year and into the first quarter of next year,” Foggie said.  “We’re definitely tightening the belt so that we can be well prepared to navigate through that.”

While financing conditions are stormy for CRE in late 2022 with a recession potentially looming around the corner, market players see the CRE industry as being in far better shape now than during  the credit crisis of the late 2000s, largely because of new banking regulations.

“I don’t think we have an overlevered banking system, and a lot of that is due to the regulation over the last 14 years that really curtailed banks’ ability to make certain kinds of loans,” Josh Zegen, managing principal at Madison Realty Capital, said during the third panel, “A Tale of Two Crises: Are We Better Positioned This Time Around?”

Ronnie Levine, senior managing director, Meridian Capital Group, said safeguards put in place since the GFC should prevent the current market challenges from turning into a major crisis for CRE even though there are some holes in the capital stack, especially for most bridge loans refinancing today at higher interest rates. He stressed that the biggest near-term hurdles are for banks to deleverage and for the market to get a firm grasp of where cap rates will end up in order to better determine the value of CRE assets in deals.

“I think you can’t underestimate the strength of the banking system today versus then,” said Yahr, who had an eagle’s eye view of the crisis working on the institutional fixed-income sales desk at Lehman Brothers in 2008. “I think the regulators do have their eyes on those banks.”

Yahr, who was appointed as a Trimont board member Nov. 10 after serving as managing director and senior credit product specialist at Angelo Gordon, added that a far different CMBS landscape also makes 2022 far different from 2008 with the conduit market a fraction of the size it once was. Back in the mid-2000s there was consistently more than $600 million of yearly issuance with “lax underwriting,” and since then there have only been a handful of years where annual volume exceeded $100 million.

Even though CMBS debt is far lower now than 2008, Zegen cautioned that much of those securities involve office deals which could feel some “pain” from declining leasing rates as more companies reduce their footprints because of increased remote working capabilities.

The discussion between the lenders centered around the direction of the capital amid the ongoing market volatility. “We’re going to invest in things that we believe are on theme, and in business plans that are more narrow in nature,” said Traut.

“The U.S. is a big winner today,” Rosenfeld said. With significant challenges in Europe around  the energy crisis and COVID policies stalling Far East markets including China, Rosenfeld sees a huge amount of capital continuing to flow into the U.S.

Gray agreed, saying she thinks that temporary dislocation in the capital markets is an opportunity for Invesco to continue to invest in its favorite sectors where the firm believes long-term trends will continue to benefit. “We’re focused on single-family rentals, life sciences, industrial and manufactured housing,” Gray said.

For Eastdil’s Frankel, the gap between old and new valuations will create a tremendous amount of need for capital. “It’s like a Pachinko game. At some point in the capital structure, somebody’s going to end up having to keep the lights on,” said Frankel.

Things are a little different on the C-PACE lending side, where “our cost of financing is less than a traditional construction lender,” Bailey said, “so the market for us has flipped. We see a huge amount of demand, and we’re still very much able to lend.”

“We worked with a great adviser who introduced us to Steve [Rosenberg] and the team,” said John O’Neill, president of U.S. multifamily capital markets at Cushman & Wakefield. “We knew from some of the first early meetings that we shared strategic anchors like commitment and culture, in terms of commitment to clients and a competitive spirit. And, we knew early on this thing could be very successful.”

“We had some shared values coming in,” said Rosenberg, founder and executive chairman of Greystone, adding that the marriage achieved alignment, organic growth and scaling of the business in the first year alone.

“I think it’s every bit as bad as the global financial crisis,” Cobb said, starting the panel by assuming the role, in his words, of a Debbie Downer. “The Fed is doing an absolutely spectacularly bad job of managing the economy. We’re getting a triple whammy right now,” he said.

“There’s definitely a severe liquidity crisis,” Appel said. “I agree with Toby. The vast majority of people think there’s a huge revaluation of assets across asset classes. There’s going to be a tremendous amount of floating-rate credit coming due.”

When asked about the lending environment, “I would say that the product is there, but positive leverage doesn’t exist,” Cullinan said, “Private market valuations or cap rates haven’t caught up to the inflationary environment.”

The one C-PACE lender on the panel, again, stood out with a different view. “As New York City recently greenlighted the sustainable financing tool, a lot more projects can actually access this capital than ever before,” Rapaport said. “And it also allows people to put in more sustainable measures into their projects.”