The incumbent held off a surge from her GOP opponent, but Republicans did pretty well elsewhere — including knocking off the Democratic chair of the state Assembly’s Housing Committee 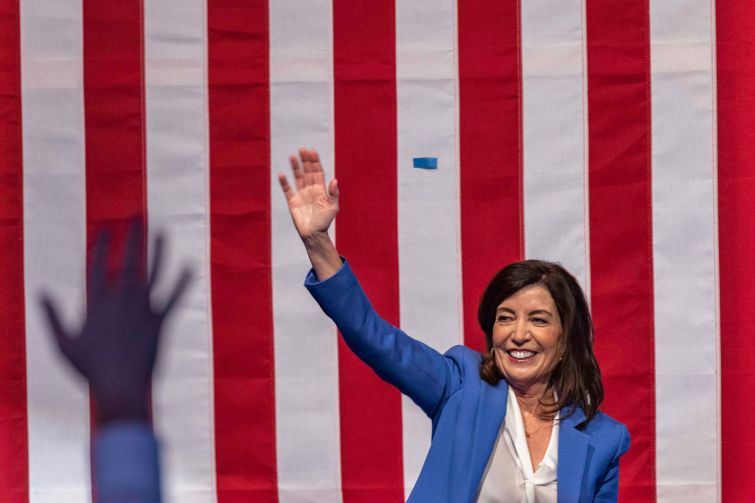 Kathy Hochul became the first woman ever elected governor of New York on Nov. 8 after edging Republican Lee Zeldin in one of the closest gubernatorial races in decades.

It was a race that the commercial real estate industry watched with particular interest, having swung squarely behind Hochul after the Buffalo Democrat unexpectedly rose to the perch of state power after Gov. Andrew Cuomo resigned from office after a sexual harassment scandal 15 months ago. The industry had a love-hate relationship with the nearly three-term Cuomo, to say the least, with often contentious — and secretive — negotiations that hinged on any number of give and takes.

Now, Hochul, whom the industry has lauded for her transparency, has a full four-year term ahead of her after dispatching Zeldin, a Suffolk County congressman, by a 52 to 47 margin.

“Tonight, you made your voices heard loud and clear,” Hochul said at her election night party at Capitale in Manhattan. “But, I’m not here to make history. I’m here to make a difference.”

Zeldin conceded the following afternoon, after saying that thousands of votes had not been counted and the media should not have called the race.

“Those controlling Albany should take note,” Zeldin said in a statement on Twitter. “As they take office in January, Gov. Kathy Hochul and all those controlling Albany must address the grave concerns voiced by the voters. While this campaign has come to a close, the rescue mission to save our state continues.”

But Hochul secured enough support from Democrats in much of New York City, Westchester and Erie County to offset gains Zeldin made in Long Island, Upstate and Western New York.

By the morning of Wednesday, Nov. 9, accolades for Hochul’s victory began rolling in, including from that commercial real estate industry that generally favored her candidacy. Though, as Zeldin surged in the polls, some in the industry had pivoted behind the Republican and accused the incumbent of dithering on public safety issues in particular.

“Congratulations to Kathy Hochul and all those elected Tuesday for the State Legislature and New York’s congressional delegation,” the Real Estate Board of New York, an owners and developers trade group, said in a statement. “REBNY and its members look forward to working together on issues essential for the continued vibrancy of the City. This includes increasing much-needed quality housing supply, addressing climate change, and supporting a robust commercial office sector.”

The race was not expected to be a nail-biter.

Democrats hold a 2-to-1 voter registration advantage over Republicans statewide and haven’t lost a statewide race since George Pataki won a third term as governor in 2002. But polls throughout the fall showed Hochul’s early 17-point lead over Zeldin evaporating. By late October, Hochul’s lead in one Quinnipiac University poll was down to 4 points while other surveys showed both candidates were tied.

The rapid narrowing spooked Democratic donors, who urged Hochul to stop campaigning on social issues and Zeldin’s role in trying to overturn President Biden’s victory on Jan. 6, 2021, and to focus instead on her plans to reduce inflation and crime. In the final days of the race, Hochul blitzed New York City in particular, touting her accomplishments fighting crime on the subway while warning voters of Zeldin’s views on guns and free elections. In his final pitch to voters, Zeldin vowed to work with Mayor Eric Adams, a Democrat, to improve public safety if he were elected.

Hochul’s message appeared to stir city Democrats to cast their ballots. She won New York City by 667,000 votes, a large enough margin that helped her offset losses in other parts of the state, including Zeldin’s Long Island stronghold, where she trailed by 150,000 votes. With 95 percent of precincts counted as of Wednesday afternoon, Hochul was ahead by about 322,000 votes.

“She was not always safe,” political consultant Hank Sheinkopf said. “Certainly, the state’s overwhelming Democratic Party registration edge helped her, but turnout saved her. She rescued her campaign by focusing on turning out African American voters in New York City, and they made the difference.”

Zeldin couldn’t pull off the upset, but his strong showing helped boost Republicans in other races across New York state.

A court-ordered redistricting that negated potential Democratic gains of four or five seats also contributed to Republicans’ successful night. Instead, Republicans gained at least four seats, an eight-seat swing that could ultimately shift control of the U.S. House of Representatives to the GOP.

Republicans also cut into Democratic majorities at the state level and made inroads into South Brooklyn’s multi-ethnic neighborhoods. Three Brooklyn Democratic Assembly members appear to have lost, including Housing Chairman Steve Cymbrowitz, who served in the legislature for 21 years.

“South Brooklyn has gotten more diverse, but a lot of moderate white ethnic Democrats lost,” Jordan Barowitz, founder of Barowitz Advisory, said. “Is this the last gasp of the more conservative voters who used to dominate that part of the world. Or are some Asians and South Asians voting Republican?”

Now that the election is over, Hochul will begin crafting her legislative agenda for the following year.

There’s no shortage of challenges, most of them tied in some way to real estate. The state remains mired in a housing crisis where the supply of affordable units has dried up, median rents have skyrocketed, and mortgage rates reached their highest mark since 2001.

Incidents of violent crime have risen since the pandemic, including a spate of antisemitic and anti-Asian attacks that have rattled immigrant communities.

Meanwhile, private sector workers have only slowly returned to the office (in part because of this rise in crime, including on public transit). Transit ridership has not rebounded above pre-pandemic levels, which has led the Metropolitan Transportation Authority to face a $2.5 billion budget deficit by 2025. Lawmakers have differing ideas on how to tackle these problems, but Hochul will get a first crack at them in her State of the State address in January.

“Now, with an electoral mandate under her belt, the hard work will begin,” Jolie Milstein, New York State Association for Affordable Housing president, said in a statement. “Gov. Hochul should continue to prioritize housing in her governorship, by finding solutions to help both property owners and tenants still struggling in the wake of the pandemic, embarking on important statewide land-use reforms, and providing and dedicating real resources to affordable housing production and preservation.”