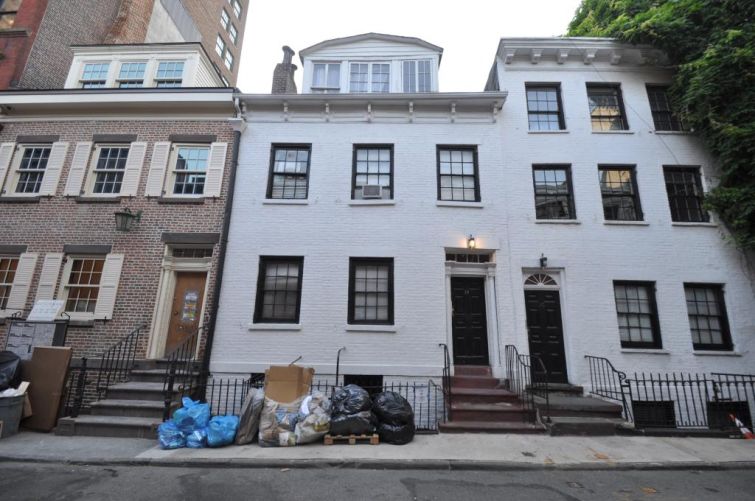 Lionel Nazarian had owned the landmarked 14 Gay Street for only six months before unapproved work in the basement meant the New York City Department of Buildings (DOB) would order its demolition.

Built around 1828, the two-story building was among a slew of other landmarked structures — including 16 and 18 Gay Street along with the adjacent 16, 18 and 20 Christopher Street — Nazarian acquired in April with the knowledge that there were structural issues stemming from a 2003 fire in the basement.

“This building was the subject of years of neglect by multiple owners,” Nazarian, of Nazarian Property Group, told Commercial Observer. “Upon acquiring the building earlier this year, we took immediate action to fix the many existing structural issues at 14 Gay Street.”

But the DOB said Nazarian did more work than the agency approved and the building is “in immediate danger of collapse.” Now preservationists and elected officials are calling for the city to restore the property and hold Nazarian responsible.

“I demand accountability for the people who allowed this historic building to deteriorate to the point of imminent collapse,” Councilman Erik Bottcher said in a statement. “Nothing is more important than human life and safety, but the city shouldn’t allow bad actors to get away with reckless construction practices that result in demolition.”

Bottcher joined State Sen. Brad Hoylman, Assembly member Deborah Glick and several other speakers at a Monday press conference calling for a stop to the demolition.

The property at 14 Gay Street was once home to writer Ruth McKenney, famous for writing “My Sister Eileen,” a series of New Yorker stories in the 1930s that were turned into a book, a play, films, radio shows and a television series. The building became a landmark in 1969 when the Landmarks Preservation Commission (LPC) made it a part of the Greenwich Village Historic District in 1969.

It was also home to beloved Greenwich Village resident David Ryan, who lived in the basement for 30 years before he was killed in the 2003 basement fire, the Times reported.

Nazarian purchased the properties for $12 million in April, paying $2.4 million for 14 Gay Street alone, according property records and the Village Sun. He got to work on a plan approved by the city to replace a foundation wall in the cellar when a crack in the exterior started to form on Nov. 7.

After the DOB investigated, it found that the contractors diverted from the approved drawings and instead did extra work in the cellar of the neighboring 16 Gay Street that was not permitted by the agency or the LPC. That illegal work left the foundation walls between the buildings unsupported.

Temporary stabilization measures have been taken on 16 Gay Street while 14 Gay is currently undergoing demolotion work. Once that is finished, the DOB will decide if 16 Gay can be fully redeemed. The two buildings were unoccupied at the time and no residents were displaced, according to the DOB.

“As we work to save the historic building at 16 Gay Street, we have also issued orders for emergency shoring work there to prevent further damage to any neighboring buildings,” a spokesperson for the DOB said in a statement. “Putting the public at risk with dangerous unapproved construction work is unacceptable, and we will be taking appropriate action to hold the responsible parties accountable.”

The LPC said it was attempting to salvage what it can from the soon-to-be rubble of 14 Gay Street, potentially to rebuild it in the future under its supervision.

“The emergency demolition of 14 Gay Street in the Greenwich Village Historic District is an unfortunate situation caused by a contractor’s failure to follow plans approved by LPC and DOB for foundation work,” a spokesperson for the LPC said. “LPC is working with DOB and the owner of the building to minimize the impact of this emergency demolition by salvaging for reuse, when possible, bricks and other historic elements for a possible reconstruction of 14 Gay Street.”

In the meantime, a construction fence has been installed around 14 and 16 Gay Street, and Nazarian was ordered to carefully dismantle the unstable building.

Nazarian, who has previously been accused of trying to force out rent-regulated tenants from an East Village apartment building, called the damage a “highly regrettable situation,” adding that he’s “working with the Building Department to mitigate any further damage.” But elected officials and activists trying to save the property said the two city agencies needed to step up to the plate to ensure that historic buildings remain in a state of good repair, acknowledging that neglect in landmarked structures is a common occurrence.

“The fact that 14 Gay Street is the 10th historic building to have been demolished in the Village strongly suggests that the city agencies in charge of monitoring and protecting historic buildings aren’t doing their job,” Hoylman said in a statement. “We demand that this change.”