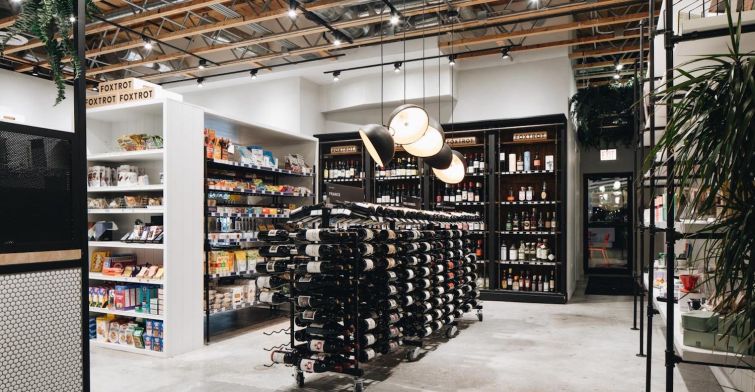 Foxtrot, an upscale corner store and café, opened its fifth location in the Washington, D.C., area — and its first in Maryland — on Friday, taking a 4,000-square-foot lease at 7262 Woodmont Avenue in Bethesda.

The building is part of Bethesda Row, Federal Realty’s 529,000-square-foot mixed-use development that includes retail, offices and a residential community in a walkable neighborhood.

Located at the intersection of Bethesda Avenue and Arlington Road, just seven miles north of the District, Bethesda Row is a 17-acre development that includes retailers such as Apple, Equinox and Anthropologie.

The new Foxtrot location includes seating indoors as well as an outdoor patio and an outside oak bar, where visitors can eat or grab a drink.

The Chicago-based brand, which bills itself as a “modern convenience store,” raised $100 million in early 2022 to embark on an ambitious expansion plan. Outside Chicago, the D.C. metro has the most Foxtrot locations, followed by Dallas. The brand has 22 locations in total, with plans to continue expansion in both existing and new markets this fall.

The company plans to expand in New York City, Austin, Boston, Miami, Los Angeles and Houston among others.

Other Foxtrot locations in the D.C. area include 1601 Connecticut Avenue NW in Dupont; 650 Massachusetts Avenue in Mount Vernon; 1267 Wisconsin Avenue in Georgetown; and 701 King Street in Old Town Alexandria, Va.