RXR, Blackstone closed on the sale of the 40-story tower for $320 million on Thursday. 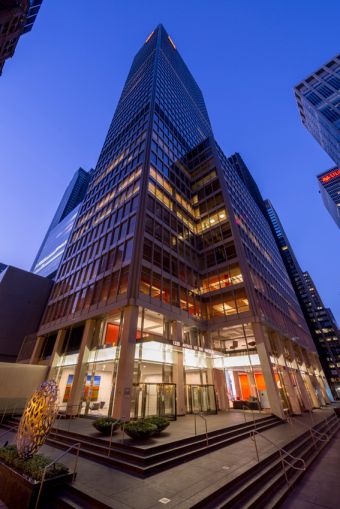 A group of investors including Empire Capital Holdings have scored $215 million in acquisition financing from Deutsche Bank for their $320 million purchase of 1330 Avenue of the Americas, according to sources with knowledge of the deal.

Empire, Hakimian Capital, CH Capital Group, Creed Equities and Nassimi Realty bought the 40-story building between West 53rd and West 54th streets from a joint venture of Blackstone Group and Scott Rechler’s RXR in a deal that closed Thursday, roughly four months after it went into contract, according to a source.

The sale managed to close even amid a tough office market still marred by high availability rates, particularly in Midtown, where the 534,000-square-foot office tower is. It forced the lenders to think outside the box on securing debt for the purchase, said Meridian Capital Group’s Elliott Kunstlinger, who arranged the financing with Drew Anderman and an Eastdil Secured team.

“In an extremely challenging market for office financing we needed to get creative on the placement of this loan,” Kunstlinger said in a prepared statement. “Having the right combination of lender and sponsor was a big contributor [to] getting the loan closed.”

Still, the Emery Roth & Sons-designed building has managed to weather the city’s embattled office market, staying roughly 90 percent leased to tenants including Knoll, CKR Law and Silvercrest Asset Management Group, according to its website. Its value has still shrunk in the past 20 years from a high in 2006, when Harry Macklowe spent $498 million to purchase the property. Macklowe was forced to auction it off in 2009 to Otera Capital following the financial crisis.

Blackstone and RXR hoped to score roughly $350 million for the tower, but the final purchase price mostly ended up paying off about $285 million in debt on the building that RXR took out from DekaBank in 2018, according to a source.

RXR and a group of investors bought the tower from Otera for about $400 million in 2010, and Blackstone later became the majority owner after it picked up a 50 percent stake in a six-property RXR portfolio in 2015, The Wall Street Journal reported.