Once willing to lend boldly, commercial real estate financiers are pulling back and analyzing more closely 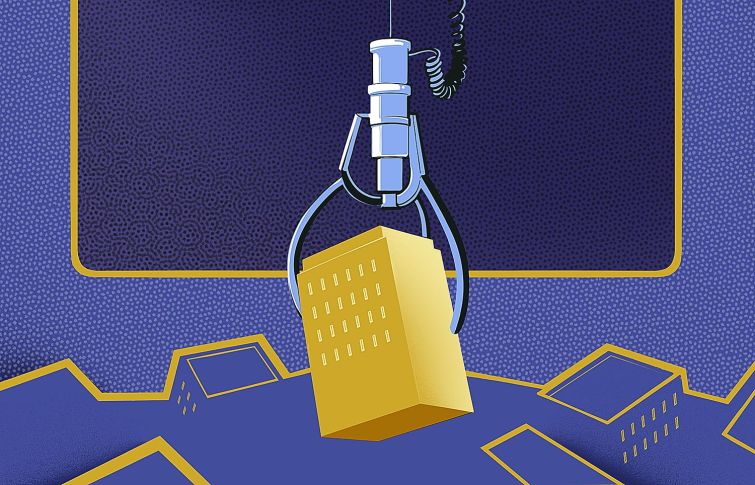 If the commercial real estate lending climate from 2012 to mid-2022 was the Titanic out of Southampton, England — sleek, agile, strong and seemingly invulnerable — the last six months have been the first hour after the ship hit the iceberg. Panic has set in, and the band’s striking up “Nearer My God to Thee.”

One year after record lending volume during what seemed like a joyous recovery out of COVID, the debt markets began to tighten in the second half of 2022. The culprit, of course: uncertainty over how high the Federal Reserve will raise interest rates to fight inflationary pressures and an impending recession.

The debt markets began to dramatically change when the Fed increased its benchmark federal funds rate 75 basis points on June 15, marking the central bank’s first three-quarters of a percentage point hike since 1994. It followed up with two additional jumbo rate hikes in August and September, bringing rates to a range of 3 percent to 3.25 percent compared to the near-zero short-term borrowing conditions in early 2022, with no indications of letting up on the hawkish strategy anytime soon.

With market conditions now very different than even six months ago, most traditional lenders are taking a more cautious approach on what deals to pursue, according to Matt Stearns, head of originations at Black Bear Capital Partners. Stearns said Black Bear is most focused on higher quality sponsors and properties and is not tackling as many bridge lending deals of late.

While the markets are choppy to say the very least, Stearns said he does not see any similarities to the 2008 global financial crisis, when lending discipline was lax and loans to lower credit sponsors were de rigueur. One notable difference between now and 2008 is that loans then were underwritten with a loan-to-value base rather than debt service coverage ratio and debt yield base. He added that despite banks pulling back of late, there is still plenty of liquidity on the sidelines to deploy because of government stimulus money rolled out during the COVID-19 pandemic.

“At the end of the day, I think the vast majority of the market right now is definitely looking more apprehensive right now, just trying to take a little bit of a pause trying to figure out what’s going on,” Stearns said. “People are looking for reasons to not do deals.”

Third-quarter lending data has not been finalized yet, but a large volume dip was evident in August when the number of investment sales transactions nationally fell 50 percent annually, according to Aaron Jodka, national director of capital markets research at Colliers. While the third quarter of 2021 is not a benchmark time period to compare with due to its record financing activity, Jodka stressed that the debt markets are struggling as lenders and borrowers adjust to a new pricing reality.

“Lending has become more challenging in the last few months, not because the capital isn’t available, but that borrowers are readjusting to a higher cost of capital,” Jodka said. “That is causing friction in the investment sales market, where buyers are no longer able to pay 2021 pricing here in 2022.”

As lenders grow more selective in late 2022 on what deals to tackle, and with loads of capital on the sideline, industrial and multifamily are where the action is largely taking place. Jodka said sectors have been limited, however, with lenders prioritizing industrial deals in core markets like Southern California and Northern New Jersey — or in multifamily in the Sun Belt.

Increased borrowing costs are evident across all major asset classes, with credit spreads sought by lenders on top of the Treasury rate up to 230 basis points this year on anchored retail properties, with a 55 percent to 65 percent loan-to-value (LTV) ratio compared with 180 in October 2021, according to data from Cushman & Wakefield. Credit spreads for Class A office assets at a 60 percent to 75 percent LTV were 245 basis points in early October compared to 170 a year ago, according to Cushman & Wakefield.

“There isn’t much liquidity in the market,” said Andrew Miller, founding partner at multifamily investor Skylight Real Estate Partners. “People are waiting on the sidelines not wanting to issue debt into a market where they don’t know where the bottom is.”

Miller added that closing deals the last few months amid much uncertainty from lenders has been challenging even in the well-performing multifamily sector. Skylight was slated to close a debt deal in mid-October, which Miller stresses was only in position to cross the finish line due to the transaction being in motion since March, with the lender willing to hold interest rates steady.

“The market changed dramatically, and we’ve had a couple of price adjustments along the way, and our lender has really been fantastic and has held the rate for us, which is very, very rare,” Miller said. “But they did cut our proceeds dramatically.”

Nitin Chexal, the CEO of Palladius Capital Management, said banks and traditional lenders have balance sheets far improved compared to 2008, which, coupled with stronger liquidity requirements, means much healthier markets. Chexal said prolonged interest rates around 0 produced a number of private players in the market as asset valuations rose, but has not led to much corner-cutting from the lending side.

While a number of lenders  are pulling back from the market in late 2022 — several of whom have also found their ability to provide low-cost capital disappearing as their own lenders head for the hills — Chexal does not expect the lending slowdown to last too long given that economic conditions are overall positive, with unemployment still low, a gradually improving supply chain and a right-sizing of commodity prices. He said the rising interest rate environment presents unique opportunities for some lenders to stand out by offering short-term loans as others sit on the sidelines.

“For people that have liquidity and that can put capital out into bridge loans, the opportunity set is just continuing to get better because the quality of the collateral is getting higher and higher and the rate you can charge is also getting higher,” Chexal said. “When interest rates were lower, there was lots of liquidity and constant payoffs, and refinancing was taking place that allowed those lenders to get that liquidity back and then redeploy it into the market. As interest rates have risen, payoffs and refinancings have correspondingly also fallen just as fast because the paper that somebody’s holding on to is far less expensive versus if they had to go into the market and refinance.”

Ellen Comeaux, senior vice president and leader of TIAA Bank’s commercial division,  said a big lesson from the great financial crisis was that sponsors need to have more skin in the game and not be in a position where they can easily hand back the keys to lenders. Comeaux said that in 2022 she and lenders are more focused on quality over quantity while resisting the temptation to relax credit standards, like what occurred with some in the late 2000s.

“We’re not stretching beyond our risk appetite,” Comeaux said. “We’ve looked at simplifying our business, like looking at some of our processes and forms and documents that might have been considered belt and suspenders, and we were able to simplify how we do business there, but we didn’t add additional risk by doing that. So we might tweak a structure or a standard here and there, but we always keep an eye on our overall risk appetite and the risk return balance as a whole.”

The tightening lending standards have opened the door for some hard-money lenders to offer high-leveraged loans for borrowers in need of a fast capital infusion.

Andrew Schnissel is one such lender who has taken the ball and run with it with the launch of Gramercy Capital, a new bridge lending platform. Schnissel, who was a partner at national hard-money lender We Lend, provides short-term bridge loans in New York City with the backing of an unnamed New York City family office. He touts his ability to quickly execute high-interest rate deals without requiring appraisals.

Schnissel said most demand for his platform comes from property owners in distressed scenarios in danger of defaulting on previous debt, especially with commercial mortgage-backed securities (CMBS) loans.

“Banks are turning back in terms of leverage point and prefer to work with existing relationships,” Schnissel said. “People who took out CMBS loans on commercial assets pre-COVID overinflated values, and those loans are underwater at this time, and base owners are in the process of being foreclosed on.”

The no-appraisal strategy by Gramercy is being deployed strictly in New York City due to a solid understanding of the market, according to Schnissel. However, appraisals will still be required in other parts of the country where the firm is executing deals, like South Florida. Schnissell said much of the overall appraisal system needs improvements, with valuations out of sync due to outdated information on properties.

Robert Nelson, president of Nelson Management Group, which owns and operates more than 4,500 apartments across New York City, has dealt solely with institutional lenders in his more than 40-year career. Nelson described the hard-money lending world as “the Wild, Wild West,” but said the model is well equipped for this market evironment.

“It’s a no-lose situation for those guys because they’re either getting ridiculously high interest rates and then they’re going to get paid off, or they’re going to take back the property at a discounted price,” Nelson said. “Hard-money lending obviously doesn’t thrive as well in a low interest rate environment, and it’s starting to bloom for them again because the savings banks or the big banks or the agencies are starting to reduce the proceeds that they’re willing to lend.”

Nelson noted that traditional lenders are readjusting their risks as interest rates rise even for the hot multifamily sector, and he does not foresee standards being lowered. He said from a borrowing perspective there will be potential buying opportunities that will arise as prices head downward.

The market volatility is likely to lead to a lot of defaults in 2023 in asset classes most affected by the pandemic such as office, hospitality and retail. Chexal said that while many lenders were willing to work with borrowers in 2020 during the pandemic-induced recession since their struggles were driven by a health crisis outside their control, patience has started to wear thin more than two years later.

“Some of these assets have little value unless they’re repurposed, and others just need to have an asset value recalibration or a reset right down to levels where they can reset rents in a way where you can pull people back in,” Chexal said. “The paper debt that will feel the most impact is going to be those asset classes, in my opinion, most heavily impacted by COVID as a function of new forms of e-commerce and communication affecting the value of those assets.”