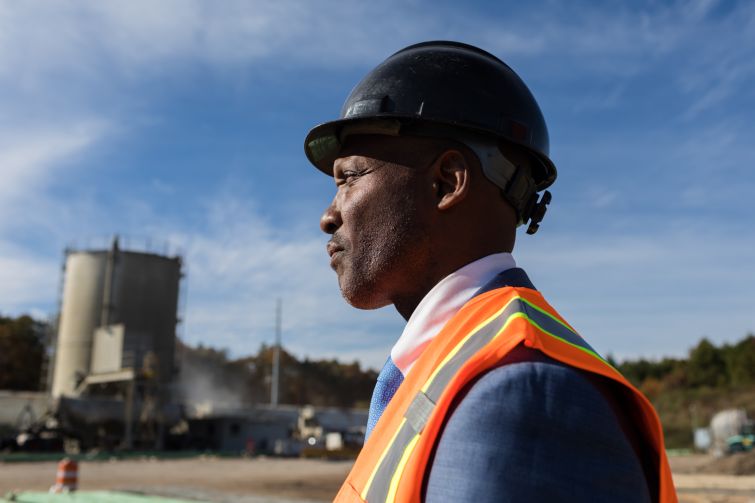 When Andrew Simmons, founder and CEO of A&S Rebar and co-founder and CEO of Lashay’s Construction, was 8 years old, his mother, Lillie Pearl Simmons, died of lupus. His father, James, did his best to control Andrew and his three siblings, but he wound up running wild on the streets of his native Yonkers, N.Y., by the time he was 14.

“I ended up selling drugs in Harlem, and kind of lost my way,” he said.

Simmons, 58, would eventually spend more than seven years in prison for his misadventures before turning his life around and grounding himself in the business world. This eventual good fortune was set in motion by his parents, who gave him the solid foundation he now credits with ultimately saving him.

He got a taste of the construction business from his mother’s side of the family in Birmingham, Ala., where his mother’s brothers would “build homes from the ground up.” His father also put Simmons and his older brother, James, to work at a young age. In addition to owning a floor-cleaning business, the elder Simmons was a supervisor at Phelps Dodge, which made underground cables, and a maintenance man at Whitney Young, a residential building in Yonkers.

“My dad had me and my brother sweep flights of stairs and patrol the hallways. He was getting us prepared to be men,” said Simmons. “We also used to work with him doing floors, after he got his floor business. So entrepreneurship comes from the bloodline.”

Given this, Simmons lived a double life of sorts in his teens. He maintained good enough grades to stay in school and eventually graduate while learning business from his family. At the same time, driven in part by jealousy and insecurity after his father married a woman with a daughter, Simmons delved into a different kind of business.

“I got lost in the streets, selling drugs and hustling,” he said. “When you are out there with your best friends, love is people in the streets, you know what I mean? My father gave me a good foundation, and he made mistakes. When I look at it now, for a man to lose his wife and be left with four kids, it was a challenge. And I understand that. When I was older, I went to therapy for a decade to learn, why am I angry? What caused the problem? And I realized that I had to take responsibility. Part of me wanted to be in those streets, you know? When my dad married a lady with a kid, I was affected by jealousy. I felt like he loved that little girl more. And I ran to the streets for love.”

In addition to using drugs himself, Simmons sold heroin, cocaine, PCP and marijuana until around age 22, when he was arrested, convicted of various drug and gun charges, and sentenced to 138 months (11 years, six months) in prison under mandatory minimum laws.

Years later, U.S. Rep. Charles Rangel of Harlem would apologize to him for his role in furthering those laws.

“We were doing a magazine shoot for the MTA. I said I would do it, but that I needed to talk to him one on one,” said Simmons. “I let him know that was a bad deal they signed for mandatory minimums. President Biden has acknowledged this. … The time didn’t fit the crime, and a lot of Blacks and Puerto Ricans got caught out on that. That changed me, and I became a jailhouse lawyer.”

While incarcerated, Simmons was a model prisoner, ultimately serving a bit over seven years. He now believes that in addition to the solid foundation which helped him go straight from then on, he also had some luck on his side.

“People call me ‘Nine Lives,’ because I’ve been in spots where my whole crew got murdered — on 145th in Sugar Hill. And I survived. I survived a lot,” said Simmons. “I wanted to stop using, but I couldn’t because it became an addiction. In order to stop, I had to leave the streets. So, when I got busted, it was the best thing that ever happened to me, because it changed my life. I stopped using the day I went into prison.”

As soon as he started serving his sentence, Simmons began studying case law and taking college courses, developing a blueprint for businesses he hoped to found upon his release. In addition to providing legal help to fellow prisoners, he ultimately was able to get his own gun charge dismissed.

His legal work was so impressive that he was hired as a paralegal at the New York City-based law firm Debevoise & Plimpton immediately upon his release.

“I proved to them that I could do the same work that lawyers coming out of Harvard and Yale were doing,” said Simmons.

Shortly after, in 1996, Simmons founded Lashay’s Construction & Development with his older brother, James. (The pair have since separated their business interests, but remain close and occasionally collaborate on projects.) Lashay’s specializes in commercial and residential projects, including school and college construction, as well as transportation and infrastructure work. The firm has managed development projects as a prime contractor, including work on the Port Jervis train station, the Queens Midtown Tunnel, the Avenue N and Avenue X train stations, the East Side Access project, and the Whitestone Bridge, in addition to also completing over 100 projects as a subcontractor.

Simmons noticed the need for rebar fabricators — particularly Black-owned businesses — while working on East Side Access, a project wrapping this year to connect the Long Island Rail Road directly with Grand Central Terminal.

“I was doing thousands of tons of rebar installing on that,” said Simmons. “So, I was like, I’m going to start my own fabrication shop. What I didn’t know is that the fabrication business of rebar is a generational-wealth business. The mills are tight — they don’t really want to let anybody else in there. It’s hard to buy from them. So it was a challenge, but I made it through that challenge. I was certified by the DOT to fabricate epoxy rebar. That was a game-changer for me.”

Simmons leapt at the chance to create a rare Black-owned business in the rebar sector.

“Eleven billion dollars of rebar are sold in America every year, $600 to $700 million in New York state, and not even half a percent goes to a minority company,” said Simmons. “There are no Black people there — just a lot of white generational-wealth families. So I’m trying to grow and scale, and I’m trying to change the paradigm and change the faces. I’m up to buying almost a million dollars in rebar a month. And when you look at the sandhogs, mine was the only Black-owned company under the tunnel during East Side Access. That’s a game-changer.”

His two companies combined currently have around $30 million in backlog work, with about $8 million booked as revenue for this year. (He has about 50 people working for him between the two companies.) As far as current projects, Simmons is the supplier and fabricator of rebar for New York State’s $1.7 billion Hunts Point Access Improvement Project and its $1.22 billion effort to widen the Van Wyck Expressway, as well as for a project at Terminal D at LaGuardia Airport. Lashay’s Construction is the installer for these projects.

While COVID hurt his business in predictable ways, he also benefited when many states shut down their rebar fabricators but New York did not. That allowed Simmons to grow his business with new clients he might have never connected with were it not for COVID.

Among the many jobs he’s proud of, Simmons recalls working on the rehabilitation of the Queens Midtown Tunnel Ventilation Building four years ago.

“I was the general contractor,” said Simmons. “The ventilation plant has 11 big stacks. We renovated the concrete on the wall and did the terra-cotta around the building. It was a big job for me, about $2.6 million, and we finished it on time and on budget. My getting it really set the tone differently for minority contractors and small businesses. That was a high-prestige job. That’s one of my jobs that I’m very proud of.”

Michael J. Garner, chief diversity and inclusion officer for the MTA, estimates he’s worked on at least 10 projects with Simmons since the 1990s.

“Andrew has a very hands-on focus, and he delivers what he promises,” said Garner. “Andrew brings value and professionalism, finishing projects safely, timely and on budget. He’s successful because he focuses on solutions and he’s not blinded by problems.”

And U.S. Rep. Gregory W. Meeks of Queens holds up Simmons as an example of how people can turn their lives around.

“When we talk about redemption or second chances, we’re thinking of people like Andrew Simmons,” Meeks said in a statement to Commercial Observer. “Rather than let the adversity of his life define him, Andrew stood up and fought back. He’s the kind of person who turned right back around, persevered through challenges and even stuck his hand out to pull countless others up with him. We need more people to model Andrew’s commitment to redemption and opportunity to better our neighborhoods and communities.”

On this point, Simmons, in addition to all he’s done with his businesses, has also co-founded two nonprofit organizations: the Center for Urban Rehabilitation and Empowerment (CURE), which provides affordable housing in Westchester County and its surrounding communities, and My Brother’s Keeper, which provides job training for young adults.

“In My Brother’s Keeper, we take young adults who are selling drugs off the streets, in a partnership with Westchester Community College,” said Simmons. “We help them get their GED, and we put them on jobs we have. I’m about building generational wealth, and building economic development and strength for people. I’ve given hundreds of people jobs with decent pay.”

Simmons says he does this not only to help the community, but also to ensure fair second chances for people with backgrounds like his own.

“Recidivism is sometimes misunderstood,” he said. “A lot of people you can give work to won’t go back on the streets to sell drugs.”

Simmons currently lives in Yonkers with Melinda Simmons, his wife of five years. He has two grown daughters, Precious and Lashay, and a 2-year-old daughter, Lillie Pearl Simmons, who is named after his mother. Simmons created a 12-unit affordable housing development in 2010 in Yonkers and named it similarly: Lillie Pearl on the Hudson.

In addition to working and spending time with his family, Simmons has lately been delving into a relatively new passion: golf.

“I got into golf three years ago. I pay a trainer. I go to all these golf outings with these steel institutions. I’m part of the New York Building Congress. I’m part of the Long Island Contractors Association. I’m part of AGC. And when I get out there, it’s a proud thing to see a Black guy that can play golf. You know what I mean?” he said, laughing. “I love the game. The guy that teaches me just invited me to go to Scotland, so I’m going to Scotland in 2023. I guess my game’s getting good now.”

Looking ahead, Simmons seeks to grow his rebar business exponentially, a success that feels more attainable the further he gets from his hard-strung past.

“My five-year goal is to grow this fabrication business to around $50 to $60 million a year,” said Simmons. “The only way to grow on scale is to build relationships. You need deals where you have contracts for years, not just bidding on jobs. So that’s what I’m building.”