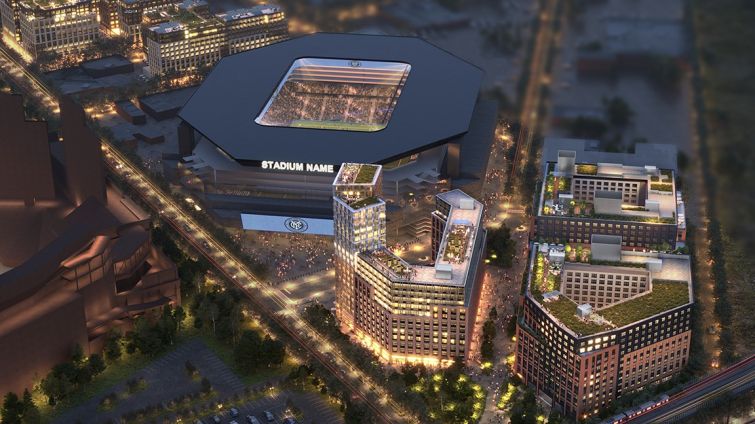 A rendering of the proposed NYCFC stadium and development in Willets Point, Queens. Rendering: S9 Architecture/NYCEDC

After more than a decade of negotiations, New York City has finalized a deal to build a professional soccer stadium and affordable housing at Willets Point in Queens, next to Citi Field.

The stadium will offer a permanent home for New York City Football Club (NYCFC), the city’s peripatetic professional soccer team that has played its home games at Yankee Stadium, Citi Field and even its rival’s home, Red Bull Arena in New Jersey.

The long-neglected, 23-acre swath of eastern Queens is set to be developed into a 25,000-seat stadium, a 250-key hotel, a 650-seat elementary school, 2,500 units of affordable housing and ground-floor retail space, Mayor Eric Adams confirmed during a press conference Wednesday.

Developers Related Companies and former Mets owner Sterling Equities are expected to break ground next year on phase one of the project, which will include 1,100 apartments, the school and 40,000 square feet of public open space. Adams promised that the project will be built and operated exclusively by union workers.

The developers will also build new sewers, streets and utilities for Willets Point, an industrial area known mostly for its dirt roads, car repair shops and polluted legacy as a dumping ground for coal ash from Brooklyn. F. Scott Fitzgerald famously referred to the area as “the Valley of Ashes,” though in more recent decades the neighborhood, which is bookended by a pair of elevated highways and Flushing Meadows Corona Park, has become known as the Iron Triangle.

“We have a once-in-a-generation opportunity to create a brand-new neighborhood, a Willets Point that offers real opportunity for working people and all New Yorkers,” said Adams, speaking at the Queens Museum in front of union construction workers and NYCFC supporters. “This is the biggest 100 percent affordable housing project in New York City since the 1970s. We need to find ways of keeping working people in our city.”

The soccer team will fund the entire construction cost of the city’s first soccer stadium, estimated at $780 million, The New York Times reported Tuesday. Related and Sterling leased the industrial land next to Citi Field from the city for 49 years, with an option to extend for another 25 years. They will pay “up to $4 million” a year for the land, according to the Times. The Times also said the developers will not pay property taxes, but it’s not clear if they will provide payments in lieu of taxes or not.

The city began remediating the heavily polluted development sites in June and expects to wrap up the process of removing toxic soil and underground tanks by 2024, according to the Queens Eagle. The city seized much of the land from private business owners through the eminent domain process, beginning more than a decade ago when Mayor Michael Bloomberg was in office.

The soccer team — in which the Yankees have a 20 percent stake — had previously been negotiating with developers in the South Bronx to build a new stadium next to Yankee Stadium. The proposal called for redeveloping some of the Yankees’ unprofitable parking garages into a stadium, community space and retail. However, NYCFC decided to move forward with plans to build a soccer venue at Willets Point instead.