A South Bronx Neighborhood Considers Its Future With a Second Stadium 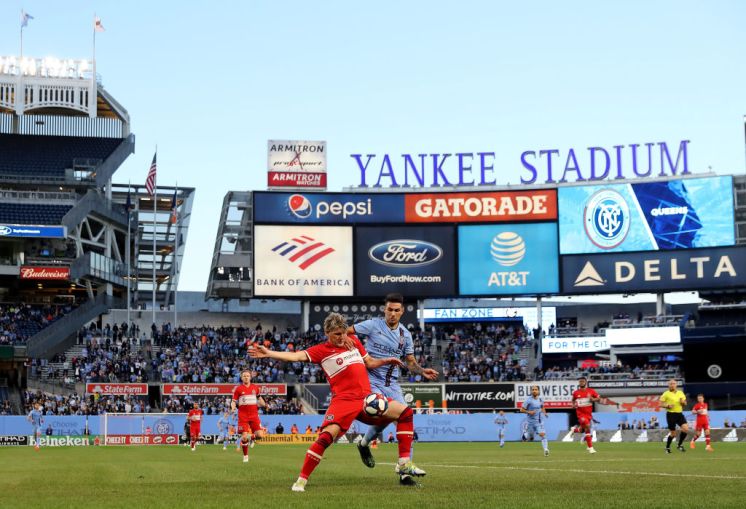 New York City Football Club and a group of developers plan to build a new stadium for the soccer team and develop several mixed-use buildings near Yankee Stadium in the South Bronx. Photo by Elsa/Getty Images

As the New York City Football Club and Maddd Equities close in on a deal to build a new soccer stadium near Yankee Stadium in the South Bronx, the Urban Land Institute and the local community board have released a report on the impact of another stadium on the neighborhood and how the area could benefit from the development.

“It’s a way for us to envision connecting these pieces of land to the existing neighborhood,” said Paul Phillips, the district manager for Bronx Community Board 4, of ULI’s report. “If we were to take on another sports venue, what would that look like, and what should we think about?

The development team behind the stadium proposal — which includes Jorge Madruga’s Maddd Equities and Eli Weiss’ Joy Construction — plans to close on six parcels in the Highbridge section of the Bronx for $54 million, the New York Times reported earlier this month. The various properties along River Avenue and the Harlem River waterfront will be redeveloped into a 25,000-seat soccer stadium, a hotel and mixed-use residential buildings. The sites include six under-utilized parking lots and garages that the city set aside as parking for the new Yankee Stadium in 2009, as well as the GAL Manufacturing elevator parts factory on East 153rd Street.

The Yankees own 20 percent of NYCFC, while Manchester City Football Club owner Sheikh Mansour bin Zayed al-Nahyan, a member of the Abu Dhabi royal family, controls the rest. The professional soccer team has played its home games at Yankee Stadium since 2015 but is often displaced by Yankee games. It has struggled to find a site for its own stadium as locals have pushed back against potential sites for a soccer complex in upper Manhattan, Flushing Meadows Corona Park in Queens and at Belmont Park on Long Island.

The Bronx Parking Development Corporation, which operates the city-owned parking lots, has failed to turn a profit for the past decade. It has lost tens of millions of dollars each year and owes the city more than $400 million in back taxes, rent and debt payments on the $237 million in publicly subsidized bonds issued to construct the garages. All told, the Yankees are surrendering roughly 3,000 of the 9,127 parking spots that were built as part of the 2009 stadium deal. The city will continue to own the land on which the garages and parking lots were developed, and the stadium development team will buy out the remainder of the 99-year leases for the garages, according to the city’s Economic Development Corporation.

“The South Bronx deserves much more than the underutilized parking lots around Yankee Stadium,” the EDC said in a statement. “Housing and amenities that serve the community year-round are key to strengthening the neighborhood for years to come.”

Although the development team and the city have kept the details of the project under wraps, the city has admitted that the undertaking will require a large-scale rezoning of the area. The rezoning opens up the opportunity for the neighborhood to look at potential community benefits, including new public space, a better experience for pedestrians, more street-level retail, and infrastructure upgrades. There are also questions about how the soccer stadium could be integrated into the community and whether it would be open to the public during the off-season.

The report authored by the Urban Land Institute calls for a new stadium to be “a true multi-purpose asset for the community and serve functions beyond its role as the primary venue for NYCFC home games.” The stadium could be used to host soccer games for local teams, as well as wellness and community programs. The design of the building could also help establish connections with the neighborhood, by appearing open and welcoming rather than walled-off like Yankee Stadium, the report says. The developers could also create a community plaza outside the stadium, allowing space for community art installations or a farmer’s market.

ULI convened what is known as a “technical assistance panel” after consulting with the Department of City Planning and Bronx Community Board 4. The panel included engineers, architects, developers and land use lawyers who had worked on other stadium projects.

The community board has only had one meeting with the soccer stadium developers and very few discussions with the city up to this point, even though the project would involve a lengthy public planning and land use process that includes the discussion of community benefits.

“The city has been meeting with the development team for close to two years and no one has really reached out to us at any level until we engaged ULI on the technical assistance panel,” said Phillips, the district manager for the community board. “It would have been nice to be engaged a little bit sooner. This [recent New York Times] article gives the impression that we’re close to pulling the trigger and that couldn’t be further from the truth.”

He added that since the development sites are public land, the city needs to consider the wants and needs of the community, which already struggles with the impact of Yankee Stadium crowds.

“Listen, if you’re going to take a city resource, even if it’s being funded completely with private dollars, there have to be a number of benefits for the people that live and work here,” Phillips said. “Whether it’s community programs, whether it’s allowing the field to be accessible for local groups to play. We have a large immigrant population that’s very interested in soccer. That’s what we’d want to see in any soccer stadium.”

The panel also looked at how traffic congestion on game days and how highway exits built for those driving to games created dangerous intersections around Yankee Stadium. It argued that a new stadium needed to address these issues by dramatically reducing the amount of parking around both stadiums, monetizing street parking and running more frequent public transit to the area on game days. A Metro North station was constructed as part of the 2009 stadium deal, and the 4, B and D trains stop next to the stadium too.

A rezoning would also allow the city and developers to create more pedestrian-friendly blocks along River Avenue, which are currently populated by parking lots, garages and businesses that are closed outside of game days. The panel recommends mixed-use zoning to allow new mid-rise apartment buildings with street-level retail along River Avenue.

“Everyone knows that there are struggling parking garages that were created as part of the last redevelopment when Yankee Stadium was built,” said Miriam Harris, the executive vice president at Trinity Place Holdings and chair of the ULI panel behind the report. “They’re financially struggling, and they’re empty, on these walkable streets. You’re thinking about how you can redevelop those properties and activate River Avenue.”

The report urges the city to work on east-west connections in the neighborhood and access to the waterfront, which is blocked by the Major Deegan Expressway and the Metro North tracks. For example, Mill Pond Park, which was built on the waterfront as part of the stadium deal in 2009, is cut off from the rest of the neighborhood by the elevated highway.

“Maddd Equities, the New York Yankees, NYCFC and the City of New York are in the initial stages of discussing a proposed project that will activate underutilized public and private properties that will require extensive community engagement and a formal public approval process with a goal of delivering affordable and mixed-income housing, new open spaces, community facilities and entertainment uses, including a soccer stadium, as well as commercial and retail,” a Maddd spokeswoman said in a statement.