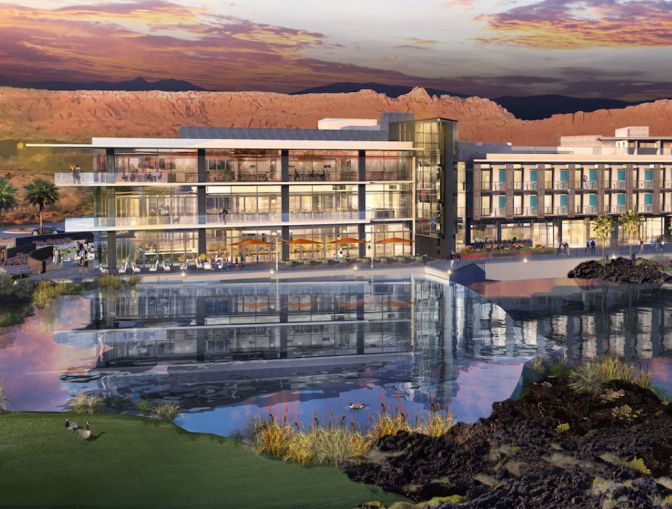 “When you think about where C-PACE has been historically, it’s always been for smaller transactions, as a very large transaction a few years ago would have been maybe $35 to $40 million,” Ghori said. “The implications for the industry I think are going to be very, very positive when people now realize that it can now be used during capital stacks on large transactions; and it’s become more accepted by senior lenders as well as developers who are building these very, very large projects.”

The $153 million Black Desert loan eclipses the previous record for a C-PACE deal set in January when Poppy Bank closed a $103 million financing for the Chinese Hospital in San Francisco. Petros set the initial C-PACE mark with an $89 million transaction for 111 Wall Street in June 202, which was the first time the financing strategy was executed in New York.

The deal closed in just four months, far quicker than the typical six- to nine-month period for C-PACE loans, according to Ghori, who early this year received an investment from Athene Holding overseen by Apollo.

“This one kind of came fairly quickly, and part of it was the market conditions were changing. And they wanted to have a certainty of close and some of the senior lenders that were looking at this as a project started to shrink,” said Ghori, referring to the rising interest rate environment that has taken hold in the last few months. “The reality is we’ve got a very large, very strong balance sheet and it’s very flexible, and we are probably the only one in the C-PACE industry that can absorb a deal like this.”

Black Rock Desert Resort is at 1500 East Black Desert Drive, about an hour’s drive from Zion National Park’s southern entrance. Phase one of the resort project will include a luxury hotel and roughly 1,000 condos; 190,000 square feet of retail, restaurant and other commercial space; 25,000 square feet of event space; a clubhouse; and a Tom Weiskopf-designed, 19-hole golf course. The first phase of the development is slated for completion in the fall of 2024.

Reef is using proceeds from the C-PACE deal to fund a number of eligible energy-efficient and resiliency projects on the property, including LED lighting and HVAC systems. The financing will also help deploy low-voltage wiring throughout the development.

Representatives at Alpine, Utah-based Reef did not immediately return a request for comment.

Ghori noted that there is an increased push by property developers to implement more energy-efficient initiatives and reduce their carbon footprints, which only increases the need for C-PACE loans. He said that, while the pace of C-PACE deals may slow in the near term due to market volatility, more developers may opt for the strategy to complete certain projects similar to what happened during the early part of the pandemic. Since its founding in 2016, Austin-based Petros has closed deals in 19 states that allow C-PACE loans.

“We tripled our business during COVID, and I kind of see this disruption as a similar type of opportunity where we’re seeing much more parity now between the senior lender rates versus base rates,” Ghori said. “We’ve got a lot of deals that are in mid-closing that are already signed up, and those numbers are in the hundreds of millions, so we feel like we’re at a pretty good spot.”