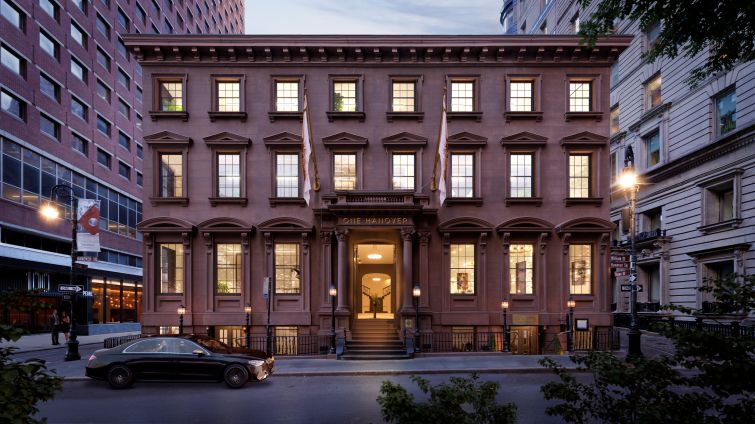 If you’re a Wall Streeter or someone who frequents the bars and restaurants of cobbled Stone Street in the Financial District, chances are you’re already familiar with One Hanover Square.

While the iconic Harry’s restaurant and bar in the property’s basement may have been what drew you in, the office portion of the landmark building is now available to lease for the first time in history, Commercial Observer can first report.

SomeraRoad is the property’s new landlord, and expects to deliver the multitenant office space in early 2023.

One Hanover Square was designated a New York City landmark in 1965, and was previously home to India House, a nonprofit members-only club that closed its doors during the pandemic. The three-story property was acquired by SomeraRoad in March 2022, and the new owner has since performed a complete reimagination and gut renovation of the 1854 building.

The first floor features a members club-esque living room complete with a bar, fireplace and private liquor lockers. It also includes a conference center and coffee bar — which serves beer on tap too — plus catering and on-demand meal delivery from Harry’s steakhouse downstairs via QR code, delivered to tenants through a secret back entrance.

Having Harry’s downstairs is quite a coup in and of itself. Harry Poulakakis first transformed the restaurant into a Wall Street institution in 1972. As well as serving up a mean martini, it’s also been featured in novels including Tom Wolfe’s “Bonfire of the Vanities” and Brett Easton Ellis’ “American Psycho,” and was a set location in the Meg Ryan and Hugh Jackman flick, “Kate and Leopold.”

SomeraRoad partnered with S9 Architecture and Husband Wife design studio in the historic building’s renovation. As part of the transformation, S9 — the firm behind restoration projects like Industry City and Empire Stores in Brooklyn — took care to preserve the building’s key historical elements, including its brownstone exterior and its ceiling, designed by Beaux Arts architecture firm Delano & Aldrich.

“The design vision of One Hanover includes carefully restoring many of the historic elements, such as the grand staircase and façade, into a contemporary design that will carry the landmark building into the next century,” John Clifford, founder and principal of S9 Architecture, said in prepared remarks. “The building design is unique in New York City in that instead of creating just Class A office space, we’re establishing a community, a collaborative catalyst, and a home away from home.”

“Given the building’s boutique nature and thoughtful contemporary design, this is a once-in-a-lifetime opportunity for 10,000- t0 20,000-square-foot tenants to take ownership over this incredible space, have a significant presence in an iconic building, and truly have a home away from home to attract and retain the best possible talent,” said Hersch, the vice chairman of brokerage at JLL. “One Hanover is one of the most beautiful, historic buildings in Manhattan, and will set the standard for how companies in New York utilize their office space.”