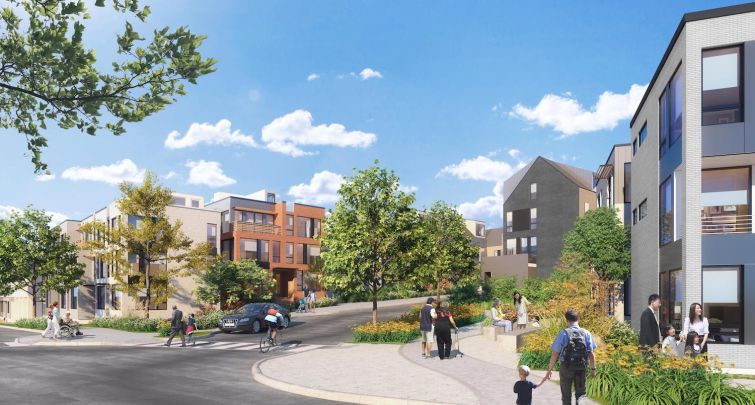 JBG Smith has submitted plans to develop a range of new rental and for-sale housing options, public parks, trails and other outdoor gathering places throughout the 36-acre RiverHouse neighborhood in Arlington, Va.

RiverHouse is in National Landing, near the restaurants and shops at Westpost (formerly Pentagon Row) and the Pentagon City Metro.

JBG Smith acquired RiverHouse along with the rest of Vornado Realty Trust’s Washington, D.C., portfolio at the time of its formation in 2016, resulting from the merger and spinoff agreement between Vornado and JBG Companies.

Under its proposal, filed with Arlington County last week, JBG Smith plans to preserve three existing RiverHouse apartment buildings with the new development primarily concentrated on the existing surface parking lots. These would  be replaced by below-grade garages.

“Following the county’s adoption of the Pentagon City Sector Plan, our team has had the opportunity to meet with local residents, neighbors, county staff and other community stakeholders,” Matt Ginivan, senior vice president of JBG Smith, said in a statement. “We are grateful for their time, insight and input, which have helped shape our proposed plans for the RiverHouse neighborhood.”

The public outdoor space would include more than 7 acres of public parks, forested areas and other open spaces connected by more than one mile of trails. This includes preserving more than 200 trees and planting 800 new ones.

The company hopes to get started on the project in 2023.