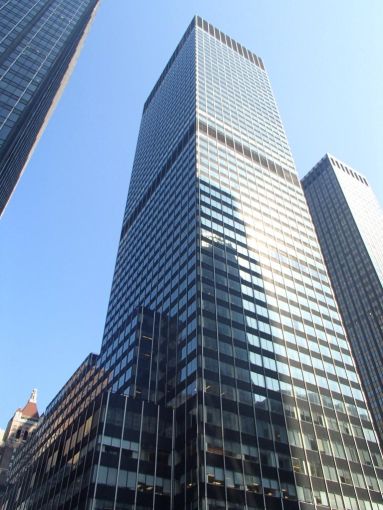 A bevy of financial tenants, including M&T Bank and a new restaurant from chef David Burke, are headed to 277 Park Avenue.

In the largest of the seven deals, M&T took 93,000 square feet on the 24th through 27th floors to relocate its regional headquarters from 350 Park Avenue in the first half of 2023, the New York Post first reported.

Each of the 250,000 square feet of leases was between 10 and 15 years, according to Cushman & Wakefield, which represented landlord Stahl Organization. Asking rents at the property range between $100 and $120 per square foot, the Post reported.

While the smallest deal, Burke’s Park Ave Kitchen is sure to cook up a lot of excitement as he plans to open his first new New York City restaurant in almost three years in 6,248 square feet at the base of the office tower in May 2023, the Post reported.

The new Lemay + Escobar-designed eatery, decked out with chandeliers and a pink Himalayan salt wall, will hold a 148-seat dining room and a 49-seat market and cafè open for three meals a day. Burke also plans to provide catering services to tenants of the 50-story building between East 47th and East 48th streets, according to the Post.

And private markets firm StepStone Group took 50,000 square feet across the 44th and 45th floors, though it was unclear if the company was expanding or moving from its 29,000-square-foot offices on the 31st floor of 450 Lexington Avenue. StepStone declined to comment.

The leases leave just 100,000 square feet left in the 1.9 million-square foot office tower — a feat given the tough office market, which C&W’s Mark P. Boisi credited to a $120 million renovation of its lobby and fitness center that drew in tenants.

“The Stahl Organization had the foresight to future-proof 277 Park Avenue beginning in 2018 through a comprehensive $120 million capital improvement program,” said Boisi, who represented the landlord with colleagues Bryan Boisi and Gordon Hough. “With its dramatic new entrance and its best-in-class amenities, including a state-of-the-art fitness center, 277 Park Avenue has enhanced its position as a premier Park Avenue asset.”

Other tenants at the tower include JPMorgan Chase, Bank of India and the Agricultural Bank of China.

It was not immediately clear who brokered the transactions for the tenants. Burke, Visa International, Intermediate Capital, National Australia and Imperial Capital did not immediately respond to requests for comment.

Hough, who has since left C&W for Silverstein Properties, declined to comment.