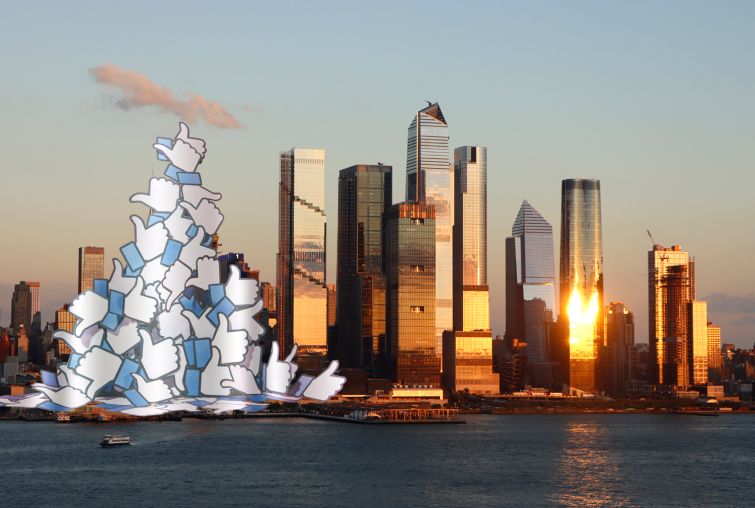 Since Facebook’s blockbuster lease of 730,000 square feet in 2020 at the Farley Building, Manhattan’s old general post office, a lot has changed, starting with the company’s very name.

In that time, Facebook founder and leader Mark Zuckerberg decided that it wasn’t enough to have the top social media site, fueling a compulsive need for multiple generations to post happenings in their own lives, and to follow the lives of their friends, relatives and acquaintances. What once seemed a heroic effort almost became too easy.

No, Zuckerberg decided that wasn’t enough. The company also had to become overseer of the “metaverse,” that virtual world that exists only in computers and computer-like instruments such as smartphones, virtual reality headsets, and devices yet to be made commercially available. The move prompted a late 2021 name-change for the company, to Meta Platforms Inc., and Facebook became a mere subsidiary alongside Instagram, WhatsApp and others.

Then, of course, there was the pandemic, which seemed to rush into existence trends that were already apparent to those in the know, such as the ability to do jobs on laptops ready to be plugged in anywhere, not just in the office. In 2020, at the height of COVID, Zuckerberg said on a live-streamed feed that as many as half of his employees would work from home within a decade, according to The New York Times.

With almost all of its business establishment reckoning with a workforce no longer compelled to commute to the office, the comment sent a shiver down the spines of New York City’s landlords, and led to Meta becoming one of New York’s most-watched companies. Given its chieftain’s comments, would it limit its appetite for the city’s office space, or would it continue to grow here?

“Meta does not have any additional expansion plans at this time,” company spokeswoman Jamila Reeves said in an email in reference to New York City.

Anyone who follows presidential politics knows that those last three words — “at this time” — are a large enough caveat to drive a truck through. There remains a possibility that Meta, as one of America’s tech giants, might see New York as its East Coast headquarters and build a huge campus here, the way Google did on Manhattan’s lower West Side and Amazon tried to do in Long Island City, Queens, until widespread opposition made it stop.

As of now, Meta is in the Farley Building, just west of Penn Station and Madison Square Garden, and also home of Moynihan Station, named for the late Sen. Daniel Patrick Moynihan. He wanted to use the Farley Building as a commuter rail station because it was designed by the firm Mead, McKim & White, which designed the original Penn Station. The hundreds of thousands of square feet of office space on the second floor in the rear of the building is all on one level, making it unique in the city.

There are indications that Zuckerberg’s foray into the metaverse isn’t going so well, having poured $15 billion into the project, according to an October story in Business Insider. Meta’s initiatives have drawn “a resounding ‘meh’ from the public” with the investment seen as risky by some analysts. Customer appetite for the function, too, has yet to be proven, according to the story.

Reeves said the Farley space was attractive to Meta because of its easy accessibility, given its proximity to America’s busiest commuter and passenger rail station, not to mention the 13 subway lines that run either into Penn Station or within a block of it.

Meta has also committed to 1.2 million square feet at nearby 50 Hudson Yards; 265,000 at 30 Hudson Yards, the skyscraper whose other tenants include KKR, Wells Fargo and Warner Bros., with the Edge outdoor observation deck; and 57,000 square feet at 55 Hudson Yards, according to data from Compstak, a research firm that tracks commercial real estate.

Lately, Meta garnered headlines for the spaces it backed out of: terminating its lease of more than 200,000 square feet at 225 Park Avenue South, in the heart of the tech-dominated Midtown South market, and backing out of a planned 300,000-square-foot expansion at 770 Broadway, its original beachhead in the Big Apple. Both 770 and the Farley Building are projects of Vornado Realty Trust, one of New York’s largest developers and owners of commercial real estate. Vornado declined to respond to a message asking about Meta’s actions.

According to Vornado’s website, 770 Broadway has 1.2 million square feet. It is reasonably typical of the buildings that have become popular with tech companies: classic architecture, designed by famed architect Daniel Burnham and finished in 1907; large floor plates — in this case, 75,000 square feet; and ceilings that range from 10 to 17 feet in height. There is a shade over 750,000 square feet in that building that is earmarked for Facebook/Meta, according to Compstak. Had the company followed through with all its commitments at 770, it would have taken over the entire building.

Facebook/Meta also has about 95,000 square feet at 335 Madison Avenue, a Milstein-owned building, according to Compstak data.

For comparison’s sake, there’s Google’s $1.8 billion purchase of the 2.9 million-square-foot 111 Eighth Avenue in Chelsea in 2010. It also bought the Chelsea Market building across the street, and has compounds at the 1.3 million-square-foot St. John’s Terminal and Pier 57. In March of 2021, it announced it would have a New York City head count of 14,000, though it didn’t say when. The head count at that time was somewhere around 11,000.

Meta has about 4,000 New York employees, according to Reeves. About 3,000 of those work in the Farley Building, another source said. Reeves defined New York as one of the company’s largest footprints after its headquarters in Menlo Park, Calif., and a San Francisco Bay Area office. She declined to give a future projection for Meta’s NYC-based employment.

According to 2021 data from business research platform Macrotrends, Meta had 71,970 employees at that time, a 23 percent increase from 2020. The previous three years saw the total number of employees increase annually 30 percent, 26 percent and 42 percent, working backwards to 2017. Attempts to obtain comment from Meta on these counts were unsuccessful. Reeves said its current headcount is over 80,000, citing the company’s second-quarter earnings report.

It’s Meta’s intent to consolidate the company in the Penn Plaza/Hudson Yards area, Reeves said. The 225 Park Avenue South office was nothing more than “great bridge space” to give the company time to operate while waiting on the Hudson Yards and Farley spaces. “We remain firmly committed to New York and further anchoring our footprint,” she said.

Would that include a long-term commitment to 770 Broadway? Reeves declined to say.

Michael Cohen, president of Colliers’ tri-state region and one of the few real estate executives willing to talk about Facebook/Meta on the record, said the media was trying to make something out of nothing. The company’s recent space givebacks are not an indicator of its direction vis a vis New York City.

“It’s a non-event,” he said. “There’s no question they will grow in New York, geometrically in fact.” As for the threat of remote work, he said “the world is still sorting itself out” regarding that.

Colliers is the company that represented Facebook when it took the Park Avenue South space.

“All these companies continue to grow,” Burch said.

Andrew Kimball, EDC’s director, said during an October press conference with Mayor Eric Adams at Yankee Stadium that Google, Facebook and Apple “all took more space during COVID, even if (employees) are going to be home part of the week.”

CORRECTION: This article was updated to reflect the correct tenant roster at 30 Hudson Yards.