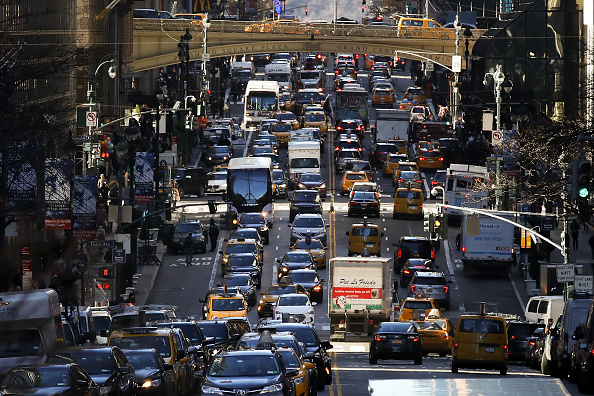 Congestion pricing would impact business districts such as Midtown the most. Photo: Drew Angerer/Getty Images

New York’s ambitious plan to toll drivers who enter Manhattan below 60th Street is on track to launch by the end of next year with heavy support from the real estate community blunting complaints from political leaders and motorists.

State and federal agencies are this fall determining the environmental impact of the congestion pricing law after several weeks of contentious public hearings. During those hearings, drivers often whined about the cost of proposed tolls, which could range between $9 and $23 per day, while demanding discounts and exemptions.

Transportation advocates aren’t worried that congestion pricing will get derailed this close to going into effect, however.

“It’s been working through the federal bureaucracy for years now,” said Danny Pearlstein, a spokesman for Riders Alliance, which organizes for subway and bus riders. “I don’t think the bellyaching from Jersey will have an impact on what is a very strict legal process. These are people who would have opposed it no matter what because it’s good politics for them.”

But another reason is that few of these arguments garnered sympathy from New York’s real estate community, who assert that public transit is the lifeblood of the region and that the system needs continued investment.

“The industry was involved in this from the beginning. All of the scenarios and permutations were made clear to us, so we have a better understanding than other people in that position,” said Jordan Barowitz, president of Barowitz Advisory and a former executive at the Durst Organization, a major landlord. “Congestion and climate change are existential threats to our city and we need to address them.”

The roiling debate over congestion pricing is nothing new.

In 2007, Mayor Michael Bloomberg tried to implement a congestion zone mirrored after similar measures in London and Stockholm. But 57 percent of the public opposed congestion pricing in an August 2007 Quinnipiac Poll, compared to 36 percent in favor (although support flipped if respondents were informed the money would go toward fixing the subways). State lawmakers blocked the legislation, claiming it was a “regressive tax” on outer borough commuters who would park their cars in neighborhoods close to Manhattan before taking the subway.

But the public’s view on congestion pricing changed over time as traffic snarled city roadways, intense climate change-induced storms socked the region, and the subways malfunctioned more frequently after years of neglect.

In 2017, after the subway’s “summer of hell,” civic leaders pushed for a new congestion pricing plan for vehicles entering New York’s bustling business districts. This time, then-Gov. Andrew Cuomo came on board and, in 2019, the state legislature passed the law. (The public was still cool to the proposal when it passed, opposing the idea 54 percent to 41 percent, according to another Quinnipiac poll.)

Delays hampered its implementation for years. President Trump’s transportation officials gave New York state almost no guidance over environmental reviews, which Cuomo blamed on a spat with the president over green cards. When the pandemic erupted, congestion pricing became even less of a priority, and the MTA said tolls wouldn’t start until 2023.Cuomo did little to advance it before resigning in August 2021.

His successor, Kathy Hochul, indicated her support, and the Biden administration finally allowed an environmental review to proceed in March 2022. But Hochul appeared to backtrack in June, saying “now is not the right time” for congestion pricing to begin.

By then, though, half of motorists said they would drive less often because of the law, a NY1/Siena Poll found, suggesting drivers were warming to the reality of new tolls. Two months later, the MTA unveiled a draft of the environmental assessment of the congestion pricing plan. The report included six different tolling scenarios with tolls that ranged from $9 to as high as $23 during peak periods, and $5 to $12 during overnight hours. Trucks and other commercial vehicles could pay between $12 and $82. Then the MTA invited the public to comment.

Opponents of congestion pricing have fixated on the price of new fees and a spate of crime on the subway.

Taxi, Uber and Lyft workers said they wouldn’t be able to shoulder the costs of traveling into Midtown and begged for exemptions. Bronx residents agonized that the congestion zone would divert more trucks through the Cross Bronx Expressway, aggravating the borough’s alarmingly high asthma rates. Staten Island and New Jersey drivers feared they would face multiple tolls during their commutes.

Some business leaders worried that congestion pricing could further deter workers from commuting to Manhattan now that hybrid work and concerns about public safety have kept people from returning to the office full time.

“Right now, I have a wait-and-see attitude,” Red Apple CEO John Catsimatidis said in an exchange for Commercial Observer’s annual Owners Magazine this fall. “I question how many people are actually returning to work in their offices. There is widespread fear about safety and crime in mass transit. The congestion pricing threat will become a major problem for inner Manhattan.”

The congestion pricing plan, released three months before a midterm election, has become a political cudgel. Reps. Malliotakis and Gottheimer, both facing tough re-election campaigns, introduced a bill requiring the federal Department of Transportation to audit how the MTA spends funds received from the federal government. And Republican gubernatorial candidate Lee Zeldin questioned whether the MTA deserves any money from drivers at all.

But subway ridership has inched upward throughout the summer before reaching a pandemic record of 3.7 million straphangers in mid-September. Ridership now stands at about 61 percent of pre-pandemic levels. Weekend ridership on MetroNorth and Long Island Rail Road trains in mid-October regularly surged over 100 percent.

The city’s roadways, meanwhile, are as gridlocked as ever. New York was ranked the most congested city in America with an average of 102 hours lost per driver from heavy traffic in both 2020 and 2021, according to data analytics firm Inrix. By September, city bridge and tunnel traffic returned to 99 percent of its pre-pandemic numbers.

Rachel Weinberger, chair for transportation at the Regional Plan Association, believes New York’s economic vitality will suffer if traffic continues to spin out of control.

“Real estate knows we can’t choke New York with traffic; we still need to manage traffic flow,” Weinberger said. “Without the subway, New York is nothing.”

Real estate leaders are poised to have a much larger say on the most transformative transportation policy implemented in decades.

Once the MTA completes its environmental review, likely by early next year, members of the authority’s Traffic Mobility Review Board will shape the parameters of the new law. That panel will ultimately consider how much fees will cost, what kind of credits could be awarded, and where the tolls will be collected.

Several of their organizations staunchly backed congestion pricing in their public MTA testimony. The Regional Plan Association, which issued a report in 2019 outlining its recommendations, urged the MTA to spell out any exemptions they give and create a fee structure that prevents drivers from bypassing crossings for the cheapest tolls. REBNY leaders emphasized the multiple benefits of a policy to reduce traffic and lower emissions while providing a stream of revenue to maintain and upgrade New York’s transit system.

“The cost of not moving forward with a tolling plan will be significant in its adverse effects to the city and region,” Basha Gerhards, REBNY senior vice president of planning, said in testimony sent to the MTA. “Through congestion pricing, New York City will have better public transportation, less congested roads and cleaner air.”

Political pressure would not deter New York’s transit brain trust from setting tolls that would meet the MTA’s goals of raising $1 billion in revenue a year, board members said.

“First, the Manhattan congestion pricing district is the law. All that remains is to set the terms for the tolls to maximize the reduction in excess traffic and to raise the target revenues,” Wylde said in an email to CO. “In New York, we are committed to getting as many people as possible to use transit by making it a comfortable, reliable and very affordable way to get around. In cities throughout the world, congestion pricing zones have accomplished that objective.”