The in-person soiree brimmed with optimism despite a rocky market 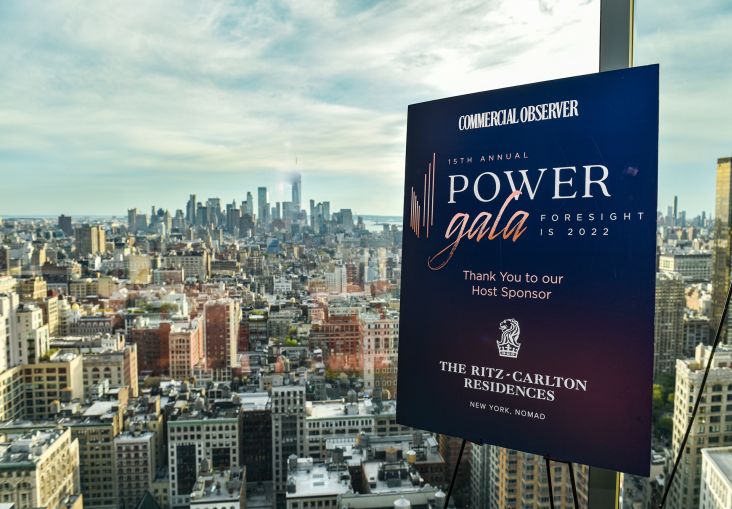 New York has its groove back, and the views are stunning.

It felt like nightlife had finally returned after more than two years of hunkering down at the Commercial Observer’s 15th annual power gala at the Ritz-Carlton New York NoMad on Thursday evening, Sept. 29. The event notes the entrants on CO’s annual Power 100 list.

Commercial Observer Editor-in-Chief Max Gross was happily overwhelmed by the turnout. He had just come from Jean-Georges Vongerichten’s Tin Building at the South Street Seaport, and earlier in the week had toured Urban Hawker, the Singaporean food market on 50th Street.

“Seeing everybody here tonight after going out for three nights in a row, it felt like, my god, we’re back in 2019, what happened?” said Gross, who moderated a brief panel with CO co-deputy editor Cathy Cunningham. “We had this event last year, and it was a wonderful feeling seeing everyone for the first time in two years. Seeing everyone again coming back, it feels like normalcy. I, for one, am happy about that.”

And there are other promising signs the real estate market is bouncing back, beyond hard-to-obtain restaurant reservations and the insatiable demand for housing. The city added 135,000 private-sector jobs since January although unemployment remains at 6.6 percent.

Those workers are coming back to their offices more regularly, too. Office occupancy in Manhattan’s central business district in September neared 50 percent, up from 38 percent this spring. And the subway carried 3.6 million passengers in early September, a record since the start of pandemic lockdowns 30 months ago.

“I’m bullish on New York real estate. There are lots of reasons to feel optimistic,” Margaret Anadu, chairwoman of the New York City Economic Development Corporation, said during an exchange with Gross. “There’s mixed data but we’re headed in the right direction, and there’s a lot about New York City that is irreplaceable.”

Of course, there are still plenty of challenges. Affordable housing is growing scarce. Inflation remains stubbornly high, pushing up building costs. And crime spikes are unsettlingly unpredictable. (Mayor Eric Adams was due to make an appearance, but an FDNY EMS veteran’s fatal stabbing Thursday afternoon demanded his attention.)

Blackstone’s Ken Caplan, global co-head of the investment bank’s real estate division and the top entrant, with colleague Kathleen McCarthy, on CO’s power list, said the industry needs to be prepared for the effects of higher inflation and a higher-cost real estate environment for the foreseeable future. But that doesn’t preclude healthy returns on investments in several areas.

“We have a large real estate business and 80 percent is in logistics, rental housing, life sciences and hotels,” Caplan said. “We are seeing double digit rental growth in these areas and that provides a powerful offset to rising rates.”

One asset guests who attended wished they owned, or at least marketed for lease, were the NoMad’s 16 penthouses stacked below the roof deck. The units — a one-bedroom is asking $4 million through Douglas Elliman and developed by Flag Luxury Group, whose CFO Adam Raboy gave opening remarks at the gala — have 360-degree unobstructed views of the Manhattan skyline, including an extremely close northern peek at the Empire State Building. If that isn’t enough, the homes are a Ritz Carlton-branded residence, meaning that when you are not there you have the ability to let the hotel rent and manage the space on a nightly basis (and you get Ritz Carlton services otherwise).

“There’s nothing else like it in New York,” said Douglas Elliman’s Nic Bottero, who is marketing the site. “It’s absolutely turnkey, hassle-free, flexible ownership with a gorgeous view and luxury at every turn.”

So far the building has had interest from international buyers and Americans outside New York looking for a third or fourth home, according to Douglas Elliman associate broker Dustin Crouse.