After Ian, Rebuilding in Disaster-Prone Areas Is Up for Debate 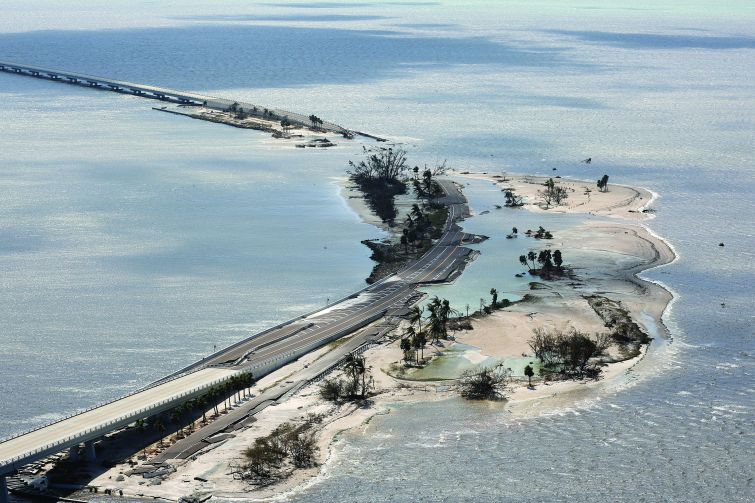 More than 100 years ago, industrialist Henry Flagler traveled by train across Eastern Florida on the newly completed Over-Sea Railroad. From Jacksonville to Key West, Flagler’s railroad marked a new era for the Sunshine State — and may very well be the key to keeping Florida’s built environment afloat.

Since that first train ride, rising sea levels have become a major threat to coastal Florida towns. When coupled with natural disasters, the higher water levels threaten the livelihood of coastal neighborhoods and their inhabitants (never mind the inhabitants’ actual lives).

Most recently, Hurricane Ian in late September damaged or destroyed at least 400 homes on the tranquil barrier island of Fort Myers, according to The New York Times. Nearby Sanibel Island endured similar consequences from the Category 4 hurricane, with the town’s mayor declaring it uninhabitable. Across the state of Florida, at least 101 people were killed, while RMS data estimates roughly $67 billion in insured losses. These numbers make Hurricane Ian the most costly storm in Florida’s history.

Unfortunately, Hurricane Ian is not an anomaly. Climate change has worsened the impact and frequency of natural disasters nationwide, with hurricanes, wildfires, tornadoes and earthquakes ravaging both built and natural environments. Often, the places that bear the brunt of such impacts are coastal; consider New Orleans’ Hurricane Katrina, the New York area’s Hurricane Sandy and, of course, Southern Florida’s Hurricane Ian, Irma and Andrew.

Each natural disaster typically leads to a period of recovery, and eventually to rebuilding. Yet the scale of damage post-Ian — as well as fears that a similar disaster could very well strike again — asks affected inhabitants and regional governments to make an important decision. This decision isn’t about how the built environment can recover but about whether it should. Rebuilding presents its fair share of difficulties, and, given the uncertainty of climate change, risks becoming a fruitless effort.

“I don’t want to underestimate the challenges,” Jim Murley, the chief resilience officer for Miami-Dade County, said of adapting to the effects of climate change.

Miami-Dade County escaped Hurricane Ian relatively unscathed, but that doesn’t mean the Miami area is immune from future risk. The National Ocean Service predicts that sea levels along the U.S. coastline will rise by an average of 10 to 12 inches in the next 30 years. This projected three-decade increase is on par with the increase seen over the past century. Eventually, the higher sea levels will result in moderate flooding that is 10 times greater than the current levels. Climate change will also cause more significant tide and storm heights.

In case that’s not enough to worry about, the rise in sea levels also means more menacing storm hazards. The predicted acceleration of natural disasters threatens the safety of coastal residents nationwide, as well as roughly $1 trillion in real estate along the coastal United States. Now, more than ever, the assumed impact of future storms threatens long-term habitation.

Here’s where Flagler’s railroad comes into play. A railroad seemingly has little to do with climate change, but that tangential moment in Florida’s history represents the state’s adaptability — and bodes well for a future that is, literally, on higher ground.

Looking backward may therefore provide the most solace for what’s ahead. The increasingly sophisticated water system will only get more sophisticated, said Murley, especially as Florida learns from the past. Currently, Miami-Dade is assuming and planning for a 2-foot rise in sea level, with a hurricane Category 4 storm surge on top. With such extremes in mind, the county can assume the worst and prepare its infrastructure for if — and when — it happens.

“I believe that our level of sophistication with the water management system and other actions that we’ll take will mean we can manage a future that is sustainable,” said Murley.

As climate change accelerates, however, predicting the effectiveness of any one solution remains relatively impossible.

“It is like walking on a shifting ground,” Jiayang Li, an assistant professor in the University of Florida’s College of Design, Construction and Planning, told CO via email. “We not only have new solutions that haven’t been tested against time, but also are faced with changing weather patterns and risk magnitudes. The only thing we can do is to set out and adjust along the way — develop adaptable solutions, test and monitor them, and keep modifying for better performance.”

Like Murley, Li sees an opportunity for Florida to adapt via improved water management. Li said tangible strategies may include strictly regulating against new developments in danger-prone zones; modifying existing buildings by elevating the first floor so water can pass underneath; and implementing nature-based shoreline infrastructure, among other techniques.

“Design proposals and field experiments by interdisciplinary teams are now underway to explore these solutions,” said Li. “But what will be implemented on a large scale still depends on support from local government and community members.”

The county government of Miami-Dade is currently exploring quite a few options. To make a sustainable future — one that allows residents to stay put rather than retreat — Miami-Dade County has adopted a strategy contingent on five adaptation approaches. Resilient strategies include building on infill; elevating structures on pilings and learning to live with more water, à la the Florida Keys; expanding greenways and blueways through trails that connect places along the waterfront and low-lying areas; creating green and blue neighborhoods that can accommodate spaces for water within yards, streets and parks; and building on high ground around transit to increase development in areas least likely to flood.

Historically, moderately priced homes like trailer parks are built around railroads, said Murley. While people typically associate poor areas with the brunt of any disaster, these homes are actually the least susceptible to hurricane damage due to their elevation. However, lower-income areas are slower to recover than fancier coastal properties, whose owners can invest private capital. Ironically, these wealthier areas house the properties with the highest value and the highest risk.

To protect Florida’s most valuable properties, developers and architects are looking to not only meet building codes but surpass them. Developers and designers are taking resilience a step further than the building codes’ minimum requirements, said Murley.

Going above and beyond is one way to cover all your bases while building. Yet exceeding building codes presents a problem when it comes to affordable housing. When you add resilience enhancements that go over code, the cost increases, said Murley, forcing the government to balance its budget without cutting corners.

Finances are intertwined with both resiliency and post-hurricane rebuilding. In a conversation with the Urban Land Institute, an international land-use think tank, Murley tackled questions that were not only about Ian’s physical damage but also about the storm’s economic impact. The cost of concrete was one resounding concern, as was the storm’s impact on signed and under-contract buildings. These financial-centric conversations suggest that demand — and corresponding development — doesn’t wane, even when a storm like Ian exposes a clear risk.

Herein lies an interesting contradiction. Florida has long been proven to be a risky area, yet developments continue to be announced, with lender interest remaining relatively stable. This desirability marks an important distinction between real estate and commercial real estate, said Jim Fraser, director of CRE strategy at Built Technologies. Fraser used the example of California wildfires to suggest that residential areas, rather than commercial ones, often face the greater risk.

“Fires in the California markets aren’t in L.A., San Francisco, Fresno,” said Fraser. “They aren’t in the urban centers. And so the exposed properties are peripheral residential real estate.”

Lender attitudes, as well as ongoing construction, are therefore less likely to be affected by natural disasters in residential-
heavy places — though even in residential hubs, building remains relatively unfazed. Northern California is associated with wildfires, but development has yet to slow; more than half of new homes in the United States are built in the line of wildfires.

This economy- and demand-driven mentality works in favor of rebuilding, though it’s ultimately up to residents in disaster-prone regions to decide when enough is enough. Although it’s often possible to find solutions that allow people to remain in an at-risk or devastated area, sometimes retreating is the best possible course of action.

Take Florida’s Broward County. In 1992, Hurricane Andrew — a Category 5 storm that destroyed 25,000 homes and damaged an additional 101,000 — made landfall in South Miami-Dade County. Following the storm, thousands of residents voluntarily left their South Florida homes to resettle in Broward County. By 2001, more than 230,000 Miami-Dade residents had migrated to the less impacted Broward area, which is north of Miami. That decision wasn’t directed by the government, said Murley, but by neighborhood inhabitants who sought a new, convenient location.

“We’re not taking people’s property by eminent domain,” said Murley, who acknowledged the risk of climate-related gentrification. “But people choose to live someplace because of its quality of life.”

Leaving the question of rebuilding versus retreating up to a place’s inhabitants allows people to not only have agency over their physical geography but also to control their psychological well-being.

“I think [retreating] is difficult on both practical and psychological levels if we further consider the scale,” said Li. “As for the psychological aspects, people can be deeply attached to their communities for social networks and landscape amenities, and since disasters are likely to be viewed as rare cases and people don’t expect (or believe) another disaster will hit any time soon, rebuilding seems reasonable.”

Buyback programs allow a place’s inhabitants to decide for themselves whether to sell their homes and leave or to stay put. So far, however, Florida’s attempts at buybacks have been fairly unsuccessful. Following Hurricane Irma, Florida’s Monroe County rolled out a voluntary buyback program, in which the government would buy and demolish homes with the intention of protecting environmental lands. Miami-Dade similarly investigated a buyback program, though the first attempt thus far ultimately failed to materialize. In the future, buyback programs could become a more prevalent community tool, predicts Murley.

Yet while the choice to migrate may be up to the people, the choice to stay doesn’t come without a cost. Even prior to Hurricane Ian’s destruction, insurance companies began to leave the Florida market, thanks to cases of fraud and Florida’s coastal location. With the onset of Hurricane Ian, the cost of already diminished insurance options is expected to skyrocket.

Even with significant insurance coverage, physically repairing a destroyed home requires ample resources. To withstand future storms and protect both oneself and one’s home, homeowners will have to invest money, time and energy into rebuilding and disaster-
proofing their homes. Ian’s insurmountable expenses present a huge limitation for anyone who lacks the resources to start over.

Certainly, Broward County exemplifies a success story of voluntary migration, but Florida’s population has grown dramatically since Hurricane Andrew, and it grew even more during the pandemic. For an at-risk area to truly neutralize the risk of climate change, quite a significant number of people would have to voluntarily leave. Without an entire area on board, the built environment remains in the hands of private owners — as does individual safety. Just as Florida has evolved since its early railroad days, the state will continue to grow and change, whether through further attempts at buybacks, voluntary migration or more resilient infrastructure.

Fifty years from now, coastal properties and their surrounding environments will likely look a little different. Murley remains cautiously optimistic about that future, cautioning against declaring it unsustainable.

“[It’s] labeling something that, by definition, is the future,” Murley said. “How do you label the future? Right? You don’t know what the future is.”